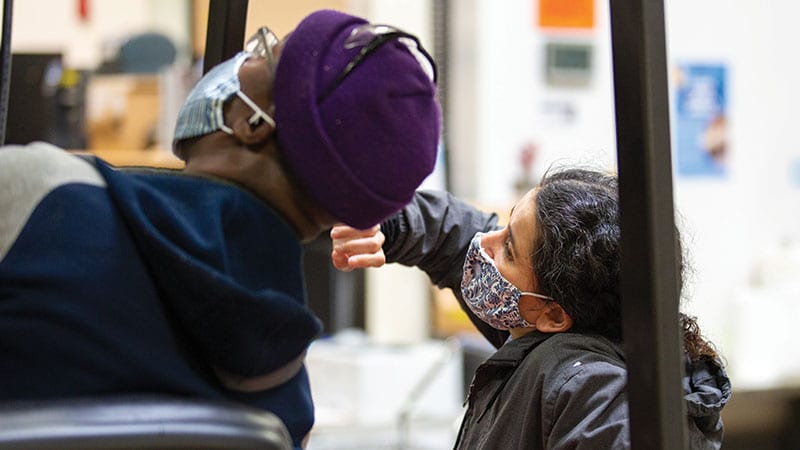 
The labels on Uncle Harry’s Natural Products look old-fashioned, but the small family-owned company is a major innovator. That’s especially noticeable when it comes to packaging: the Redmond company’s zero-waste goals led to significant improvements and inspirations for other companies and for the people who use the company’s toothpastes, essential oils and other products.

Uncle Harry’s, which also supplies products for PCC’s bulk departments, was named Recycler of the Year for Retail from the Washington State Recycling Association. Its many accomplishments include eliminating plastic from its shipping and packing, including replacing plastic shipping tape with a recyclable water-activated paper tape. The company has reduced the number of products in plastic containers, increased use of glass jars and recyclable high-density polyethlene (HDPE) and added bulk products to encourage “closed-loop” systems where packaging and containers are reused.

CEO Subhadra “Subi” Terhanian is the daughter of Harry Terhanian, who founded the company in 1991 with a tooth powder based on Ayurvedic principles. Terhanian literally grew up in the business, originally based in their Eastside home, returning in 2009 after studying Sanskrit at the University of Washington, as the business faced a national recession.

“I felt like I could organize some things and get us back on track. My plan was to leave and go to graduate school and study, like, 18th century Indian art. Instead, 11 years later, I’m still here,” she said.

“I think the work is interesting, it’s interesting every day. I’m very passionate about what we do and I want to see the human race thrive on Earth.”

She talked with Sound Consumer editor Rebekah Denn; edited excerpts from their conversation are below.

Q: How did you start down the zero-waste path yourself?

A: My mom, even though she doesn’t realize it, is maybe the most zero-waste person I’ve ever met. I grew up in rural King County in the early ‘90s when there was no recycling, definitely no composting or anything like that. We lived in a couple of acres in what is now Sammamish, we had a food scrap pile. It was a really interesting way to grow up, because back then it wasn’t cool to recycle and compost and be a vegetarian. It was tough sometimes being the weird “natural” kid at school. I grew up composting, recycling, reusing Ziploc bags, shopping at Value Village and in general really following the idea of “Waste Not, Want Not.” Maybe that’s an older generation’s understanding of zero waste.

Q: And you didn’t rebel against it?

A: I guess I’m lucky because I discovered punk rock pretty early on, and thrifting is cool in punk rock. I found my place, which was great.

Q: What are some of the company’s biggest successes reducing waste?

A: Definitely the shipping is first and foremost. When we talk about the life cycle, the overall carbon footprint of a product, we talk about how we want glass because we want to avoid plastic. What’s hidden in that conversation, the nuance, is that it costs a lot of carbon to be able to ship glass, because it’s heavier, and on top of that it takes a lot of packaging materials to make sure glass arrives safely.

I went to Hawaii for the first time when I was maybe 25. It was my first time experiencing the purity of the island and visiting a Hawaiian store that Uncle Harry’s was sold in. In those early days I was doing almost everything myself and had the realization I was packing some of the orders (I saw) … For every glass jar of ours I saw on the shelf in Hawaii I thought “Wow, when they unboxed that they unboxed rolls and rolls of bubble wrap.” Something about that experience that really drove the point home… We are shipping out so much peppermint toothpaste to Hawaii, at least if we could swap out this one thing, because it’s high volume enough, that would be a win. I was wracking my brain for a design for that and a light bulb went off—literally. What’s glass and has plastic-free packaging? Light bulbs. It’s a cardboard cylinder covered with a cardboard sleeve. We solicited a couple local boxmakers and said “Hey, we have this design, would you be able to work on this?” For a while it was just the toothpaste, but we slowly added in more custom shippers. It’s also a balance. Bubble wrap is super cheap and custom cardboard is not. We’re small and self-funded, when we make these decisions they are based in the financial reality of “We need to be able to pay for this ourselves, and we don’t want to raise prices for our customers.”

Q: As the company grows, do these decisions get harder?

A: Our growth is really strong, but we are self-funded and debt-free. My budgeting philosophy is, I don’t spend money we don’t need to spend, when I do spend it’s through our lens of values. We’re definitely not cheapskates, but, for example, we buy many things secondhand because that’s a value purchase.

I’ve thought a lot about growth and I think I’ve always thought about that a lot in context of the issues we’re having in this country. I don’t really know that the bigger you get the more efficient you get, and I don’t know that a large company could do this level of packaging and care. It requires great managers. It requires great employees, and it requires a community of folks who care about what they’re doing. It requires a leader, the person at the top has to actually invest in these things. I would love to see this in a larger business, but the larger you get the more beholden you are to people, especially if profit becomes your bottom line.

I didn’t come into the business to make money, and I think that is why we do things differently. I want to do interesting and good work and uplift people.

Q: Is there anything about the Northwest that makes Uncle Harry’s who you are? Could you thrive the same way in, say, Boston?

A: Boston maybe not, Indiana maybe so. Washington is actually the premiere mint growing area in the whole world. Mint is the number one top ingredient we use. Related to that is the Bentonite clay which comes from the Northwest, sea salt which comes from northern California, calcium carbonate, which is a natural chalk in our toothpaste and a lot of our oral care products, we used to source that from British Columbia, though now it’s Arizona. By volume and weight the majority of our raw materials are pretty local to us—not local in the sense we think of food being local, but in a global-industrial sense for a manufacturer, that’s pretty dang local. There are also great mint growing regions in the Midwest—Indiana grows a lot of mint.

We love Washington, it’s such a unique place to be and it definitely makes our products unique in the sense they are now.

Q: Are there any insurmountable challenges with zero waste?

A: I do think we’re going to see some major breakthroughs in packaging technology in the next 10 years. One really hard area for us was the lids on our toothpaste. We tried to switch to a metal lid. We had tested these metal lids and thought it was a great win, we ordered them and started using them. What we found was, some folks will get their toothpaste jar dirtier than others, getting more toothpaste on the rim and getting it wetter, and because of that when you put the metal lid back on you would rub pieces of toothpaste against the lid and the jar. If you do that over and over again, the abrasivity is going to scratch off the protective layers of that lid, expose the metal, and the toothpaste itself will oxidize the lid. We thought we were doing this amazing thing: “People have asked us for metal lids, and we did it!” A couple months later we saw the first negative review on Amazon. Obviously, it’s a big lesson about testing. There are some things where the technology doesn’t exist yet. On the other hand, there are other things where I think people think culture is insurmountable and I don’t agree with that. If you have the right product, it actually works, it helps people, and you minimize the inconvenience to the consumer, you can change the culture.

Q: What else should people know?

A: We utilized all free resources available to get us where we are, (and) I really want to just encourage people, keep trying. When it comes to zero waste and recycling we can always do more. We shouldn’t blame ourselves for not being perfect, but there are a lot of resources out there. When it comes to our recycling program, we brought in the city of Redmond. My sister-in-law Charlene, our customer care manager, called up the recycling coordinator and asked for a visit and literally pulled out every odd thing, any old type of waste we manufactured…she brought in the city, (asking) “for this type of waste, what do we do with it?” We were able to visit Recology’s reclamation center for free, we asked them questions. There are so many resources and opportunities and people who want to help out there, including the government. It doesn’t have to be expensive.

A pineapple grows in Bellevue