A pineapple grows in Bellevue 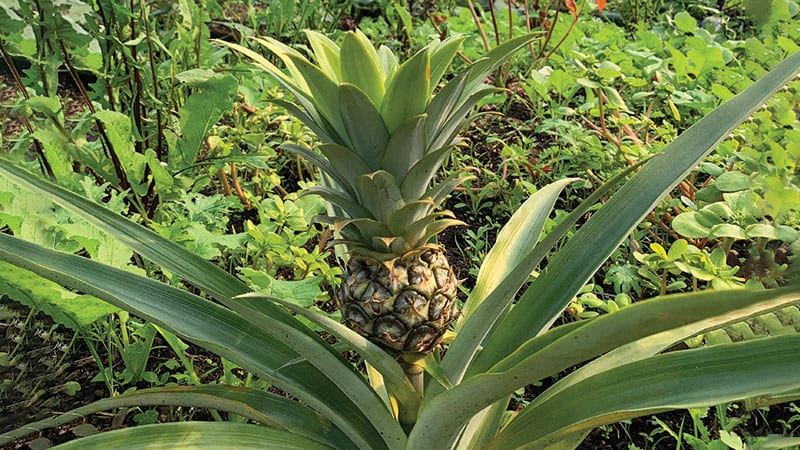 On a chilly gray day, when few Seattle-area gardens sported more than frost-nibbled kale and wilting chard, yellowish leaves the shape of a Sideshow Bob haircut sprouted from a softball-sized pineapple in a Bellevue field.

The tropical fruit once represented wealth in European countries and the American colonies, then transitioned into a symbol of welcome. Combined with a circle of brassicas around it, the pineapple precisely represents Maybin Chisebuka’s mission at The Bellevue Urban Garden and the exact kind of prosperity he sought when he left his native Zambia: agricultural abundance and an inspired community.

His passion project, funded mostly by his ceaseless work, aims to excite people about edible gardening: to motivate kids to be involved with it, to bring the community together through food, to encourage neighbors to plant more. He considers tBUG, as he calls it, much bigger than its actual 2.7 acres in Lake Hills, because its influence stretches to small farms, and his goal is to inspire a “mini-farm” at every home.

Instead of maximizing for yield, he demonstrates the seemingly infinite possibilities—that pineapples, olive trees, lemongrass and banana trees can grow in the Pacific Northwest. Still, plenty does grow, and the gates to tBUG stay open while he works—which is most of the day, most days—and anyone in need of food can harvest what they want. The remaining food, picked by Chisebuka and volunteers, gets donated to nonprofits that feed the under-resourced, such as Mary’s Place and FareStart.

Fighting hunger through gardening also brought Chisebuka to the U.S. from Zambia and shaped his life. Zambia depended entirely on the copper industry, but when he was 25, the price of the metal dropped, and the economy completely collapsed. He describes going into empty grocery stores, emphasizing that he doesn’t mean that in the standard American sense of a few things missing from shelves: “Completely empty. Nothing.” The U.S. and other countries sent food, but one day while waiting for his share, a fight broke out. As people desperately tried to get at the supply, Chisebuka fell and was trampled. “People just jumping all over me,” he describes. “I think I’m dead.” He managed to escape, upset and injured, but alive. “Why do we live like this?” he wondered. “Why can’t we grow our own food?”

Using that question as his guide, he set out to make sure that he could always provide for himself from the land. With few opportunities at home, he reasoned the only path required going to the U.S. Through a combination of perseverance, charm and luck, he managed to acquire not only a visa, but also a free plane ticket, and, upon arrival, a full scholarship to Kirkland’s Northwest University.

In the years since, he has worked various jobs, most recently as a lighting consultant, and still works part-time driving for Microsoft—“Just to balance stuff a little bit,” he says, and give him more time for tBUG. “Also to have access at Microsoft to share what I’m doing.” But the bulk of his time has always been devoted to gardening, starting with shrinking the lawn of his Eastgate home (to the chagrin of his children) to produce food instead. 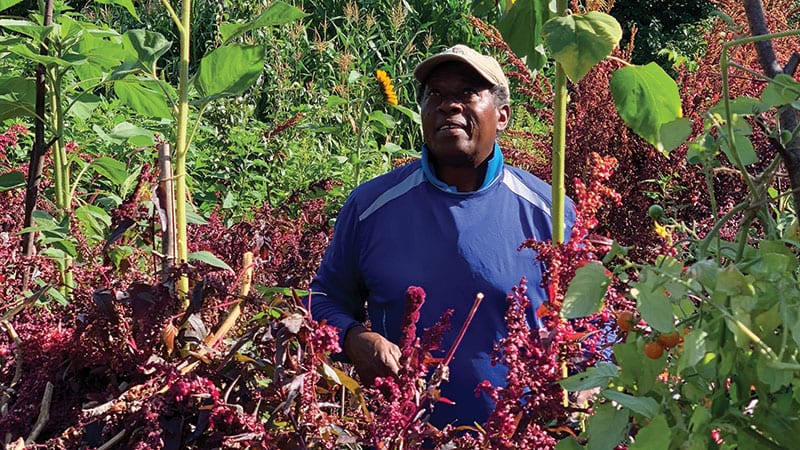 He began working on tBUG in 2015. “When you have passion and a dream, you don’t wait for funding,” he says. “You just do it.” Bit by bit, he created the garden as it exists today: the greenhouse that went in last year, an olive tree dedicated to a volunteer’s father, and a heart-shaped gathering area with a small stage and colorful umbrellas. “I call it the biggest heart in Bellevue,” laughs Chisebuka.

Woodchip-lined paths swirl and curlicue around rows of plants, an element Chisebuka draws from the principles of permaculture. He hopes to solidify the paths with recycled wooden pallets, which he pleads with the city to help with, because he sees how inaccessible so many community spaces are to his friends who use wheelchairs.

A similar attitude of inclusivity weaves through all elements of tBUG. In Chisebuka’s African garden section, careful mounds sprout with sweet potatoes, corn, beans, pumpkin leaves, and other staples from his home continent. He grows amaranth there, but additional varieties line the southern edge, where community members harvest different parts of the plant than just the grain and leaves that his Zambian cooking uses. “They really know how to pick it,” he says, recalling Mexican friends who showed him how they make it into tortillas. “We learned from them.”

Chisebuka also grows plants with which he’s less familiar. “Okay, tell us about the food you grow in your country?” he asks people. “And do we have seeds, or something that we can grow and showcase?” One seed of mountain spinach planted two years ago now washes the garden in purple leaves each spring—a highly nutritious variety of the leafy green used by tBUG friends from all over: Hispanic people worked it into eggs, Indians to curry, and Greeks into spanakopita. Community members have brought Chisebuka heirloom beans from their grandparents’ original home right across the street, from Kentucky, and even from Hungary. He believes someday changing weather patterns mean that the banana trees—whose leaves Indian community members use for cultural purposes right now—will actually blossom. 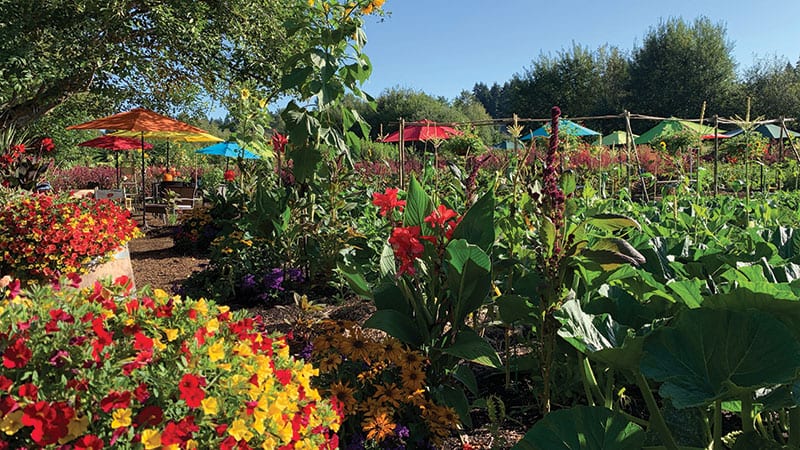 He sees the garden as a way to bring together the diverse community of the region, whether through the horseradish or onion varieties people love, the eleven fig trees that form a memorial to the victims of the Tree of Life Synagogue shooting in Pittsburgh in 2018, or through the beauty of dahlias—which, he notes, are also edible, alluding to how deeply this remains a product of his own experience with hunger.

That also makes him hyperaware when visitors wander the garden, often too shy to ask directly for permission to take food. He encourages people to pick what they need. Sometimes children negate the awkwardness, he says, blurting out, “We are hungry, we have no food.” Chisebuka smiles at the honesty. “I love kids.”

At the north end, he is clearing space for a children’s garden. He points behind some trees at more land that he can use, and across the road at another field the property owner wants him to take over, too. But first he wants to stabilize what he has. Even though he created a life around producing abundantly, he takes a wide interpretation. He wants to excite young people, to encourage their passion for food—growing, cooking, whatever—and to give them the opportunity and tools to change the food landscape. “I want to be a catalyst,” he says. “A matchstick, a spark to that.”

When a teen volunteer asks him about taking home a sunchoke to taste one for the first time, Chisebuka sees the immediate connection, the realization of his goal. “We’re growing food,” he says. “But we are also growing children and growing community.”

Connect with tBUG to learn more, donate or volunteer here.

Pebble Mine has been stopped—for now. What’s next for Bristol Bay’s salmon fishery?