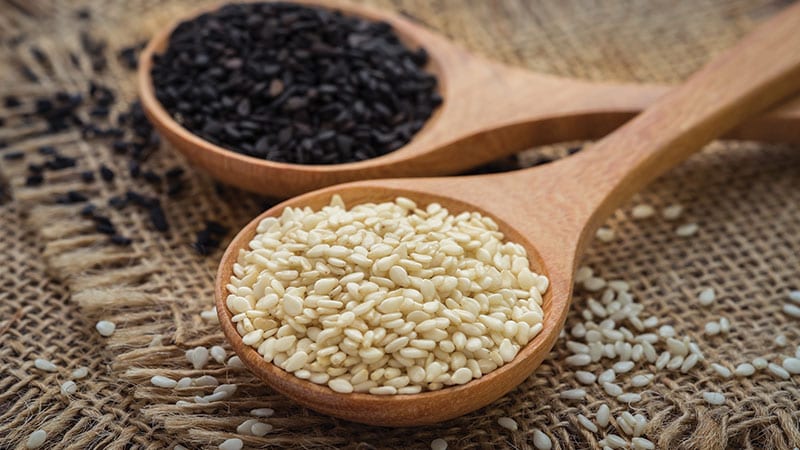 Sesame allergies aren’t as widely known as allergies to soy or fish, but some studies indicate they occur at similar rates in the United States.

That’s why two federal efforts are underway that could add sesame to the “Big Eight” major allergens that manufacturers are required to list under the Food Allergen Labeling and Consumer Protection Act (FALCPA) of 2004: milk, eggs, fish, crustacean shellfish, tree nuts, peanuts, wheat and soybeans.

The first proposal is more discretionary: A draft guidance from the Food and Drug Administration (FDA) recently encouraged manufacturers to voluntarily declare sesame in the ingredient list on food labels. That action followed a 2018 call from the FDA for data on sesame allergies in the U.S. and the prevalence of foods in the U.S. that contain sesame but don’t list it on the ingredients label. (Such so-called hidden ingredients include “natural flavorings”; manufacturers must specify if the flavorings include one of the “Big Eight” allergens but are not required to highlight others.)

Many commenters have asked the FDA to go beyond a voluntary label and instead require manufacturers to list sesame.

“Mandated reporting on sesame could save my 12-year-old daughter’s life,” one woman wrote in comments on the FDA’s draft report. “It is a silent death threat every time she eats a packaged item without sesame being listed as an allergen.”

Many others among the 600+ responses had similar concerns: “I watched my daughter go into anaphylaxis while attempting to eat hummus for the first time 20 years ago,” wrote one. “For people struggling to find safe food choices that do not cause life-threatening health conditions, labeling information is an essential and powerful tool,” wrote another.

While the exact frequency of sesame allergies is unknown, the FDA said in a statement, recent studies indicate they occur at rates of more than 0.1%.

“The responses that the FDA received (from its call for data) indicated that some allergic reactions, such as hives, vomiting, wheezing and anaphylaxis, may be occurring from products with undeclared sesame or products that contain ingredients like tahini,” the statement said. (Tahini is sesame seed paste.)

Separate federal legislation is also underway. A bill that would add sesame to the list of covered allergens, along with other updates, was approved by the U.S. House of Representatives in November. It goes to the Senate for consideration next. The bill, sponsored by Congresswoman Doris Matsui with bipartisan support, calls for declaring sesame as the ninth major food allergen as recognized by the FDA, and also would allow the FDA, “through regulation,” to add other food ingredients as major allergens. The bill also supports research into treatment for food allergies.

While more than 160 foods are known allergens, the FDA has said in the past that the eight foods required for labeling under FALCPA are believed to account for 90% of food allergies and most serious reactions to foods.

In recent years, though, sesame has emerged as a greater concern. According to TheCounter.org, “in less than a decade, the number of allergic reactions has grown roughly five-fold, with an estimated 1.5 million Americans, or 0.49% of the population, reporting symptoms from hives to whole-body anaphylaxis every year.” It is a hidden ingredient in some 775 foods, the news organization said.

The nonprofit Center for Science in the Public Interest urged that sesame be added to the list of major allergens in a 2018 report, writing that “despite being similar in severity and close in prevalence” to the others, it was not covered by the same public health protections. Without such legislation, the report said, there are potentially severe consequences to hiding sesame under labels like “spices” or “natural flavorings.”

“Sesame ranks sixth or seventh among major allergens in terms of severity, and a greater fraction of adults with sesame allergy report an emergency room visit for food allergy in the past year than adults with any other major food allergy,” the report said. It noted that the European Union, Australia and New Zealand, and Canada already require that packaged food be labeled for sesame, and that a 2016 report by the National Academies of Sciences, Engineering, and Medicine called for reconsidering whether sesame should be on the list of allergens required for labeling.

Updates on the Food Allergy Safety, Treatment, Education, and Research (FASTER) Act being considered by Congress are online here.