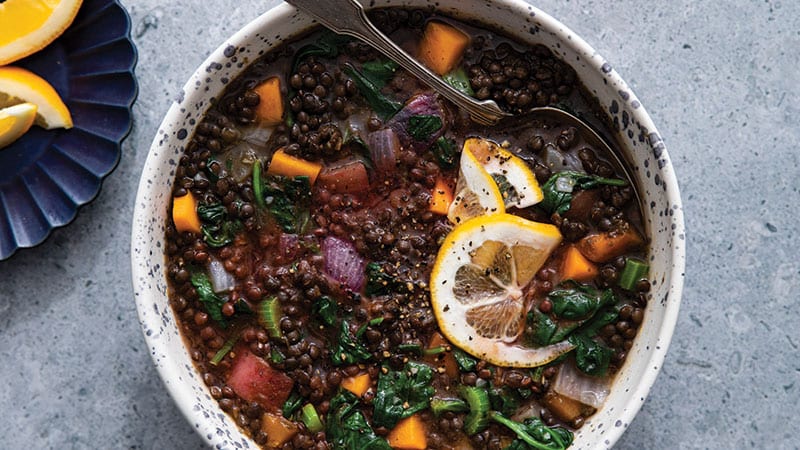 “Beans are having a moment,” noted New York Times reporter Shira Ovide earlier this year. She then added, “…for horrible reasons.”

Ovide probably didn’t need to clarify. In this era of both washing and wringing of hands, beans became the backbone of the “pandemic pantry,” a logical role for a non-perishable staple of high nutritive value that can be cooked in an infinite variety of pleasing ways.

Though they may be in their coronavirus-driven 15-minutes of fame (or, more technically, seven months and counting), beans have been around for a long time. That fact is the first sentence of the first chapter of the first book I wrote on beans: “The Bean Book,” back in 1972 (it was spiral bound, 96 pages, and cost $2.95; I was hardly more than a sprout myself). “Beans,” I (or my 18-year-old self) wrote then, “have been around for a long time, poking up their shoots in as many different cultures and capacities as one could imagine, since recorded history and before.”

Beans and I have traveled together ever since, perhaps most noticeably (at least until the present moment) when in 2012, my second and more substantive book on beans, “Bean by Bean,” was published (it was conventionally bound, 370 pages, and its cover price has gone up roughly 500%). This time, the first chapter was titled “How to Know Beans,” and I began with a quote from Thoreau: “What shall I learn of beans, or beans of me?”

I think this is a good question, and its answers are even better. I recognize that to those who have only opened a can of beans and never cooked them from scratch, a bag of speckled pebble-hard ovoids may look intimidating. But they aren’t (humans could not have survived on them so long and enjoyably if they were). Steve Sando, the smart, funny, guy who in 2001 founded Rancho Gordo (the California-based producer that is also “having a moment,” being the epicenter of heirloom beans), recently threw up his hands in disgust online: “I am seeing all sorts of elaborate instructions and they can be fun but here’s basically the secret: Simmer until done. Ta-da! You are welcome.”

Well. Almost. I’d rinse the beans first (and so would Steve, when he’s not sassing us on Twitter). Then glance over them in the colander. Pick out any bits of straw, stone, or small dried clods of soil; there probably is no foreign matter, but if there is some, it’ll be visible. Next, if you like, soak the cleaned, picked-over beans in water to cover by a couple of inches, overnight.

To soak or not to soak?

Pros of soaking: the beans cook faster, plus, if you drain the soaking water and cook them in fresh water the next day, they’ll be less “flatulating” … oligosaccharides, indigestible sugars that can create intestinal gas (especially if you’re not used to bean-eating), are water soluble. The more water you use for a soak, the fewer oligosaccharides.

Cons of soaking: you have to plan ahead, and you lose some of the flavors and colors of the beans. And some, notably Joe Yonan, food editor of The Washington Post and author of the recent and excellent cookbook, “Cool Beans,” make the case that although oligosaccharides incline one to flatulence, they are prebiotics, and thus ultimately gut-friendly.

At any rate, when you’re ready to cook the beans, place them in a large heavy soup pot. (Editor’s note: Or, for pressure cooker instructions, see box.) Cover unsoaked beans with a good 3 to 4 inches of water. For soaked beans, use either their soaking water plus any extra if needed to make sure they’re covered by an inch and a half of water. Or, if you choose to drain the soaking water (see pros of soaking, above), add enough fresh water to cover them by that same inch and a half. If you like, add some aromatics: to a pound of beans, an onion, quartered; a whole carrot; a stalk or two of celery; a clove or two of garlic. Bay leaf, if you’re so inclined, sometimes. Some also dribble in a few tablespoons of olive oil at this point; optional. But no salt! Not yet.

Bring the beans, optional aromatics, optional oil, and water to a hard boil, and boil for 5 to 10 minutes. Lower heat to a simmer, cover, and let the beans cook until tender. This could be 30 to 45 minutes (lentils, which, yes, are in the bean family, as are peas and split peas); it could be three or four hours (chickpeas, soybeans, any beans which have been sitting around in the cupboard longer than 3 or 4 years). Only after the beans are tender—so tender that, after blowing on a bean, you could place it on your tongue and smush it against the top of your mouth—should you salt them. Do so generously.

Heirloom beans, like Sando’s Rancho Gordo’s, will be extraordinarily flavorful and toothsome just like that, though that’s not to say they wouldn’t also be delish fancied up. Beans from other marketplaces usually need a little more TLC to come into their own. Think chilis … and chiles. Mediterranean flavors, South-of-the-Border flavors, of course Indian flavors. Think soups. Think an olive-oil saute of hearty greens with garlic and dried chile, tossed with cooked beans and pasta, with a squeeze of lemon, parmesan, fresh-ground black pepper. Think room-temp beans marinated in vinaigrette, with fresh herbs. Stews; curries. With tomato sauce, served over polenta. Mashed with savory ingredients to become homemade veggie burgers far superior to any you could buy. As, with breadcrumbs or potato starch as a binder, a base for vegetarian meatballs. With ginger, garlic, chile, and coconut milk, scooped over a slashed-open baked sweet potato.

Like me, you may discover that beans’ moment can be lifelong.

Crescent Dragonwagon is the author of more than 50 books, including several award-winning cookbooks. She is a former innkeeper and teaches workshops and courses on Fearless Writing. Find her online at dragonwagon.com.

Crescent Dragonwagon’s recipes for beans and legumes have inspired lifelong fans—and one incredibly long-lived lunch. For nearly 20 years, Harborview nursing manager Reid Branson savored the same meal each workday—a bowl of Greek lentil soup from Dragonwagon’s “Dairy Hollow House Soup and Bread” cookbook. He wrote Dragonwagon before his retirement earlier this year to tell her how the bright, lemony, protein-rich dish sustained him through nearly every workday, and how his habit of cooking a big biweekly batch stretched from months to years to a decade and beyond. The story drew national attention and many new fans this year with a story in The Washington Post. Even if you prefer a little more variety over time, the soup is well worth a regular rotation in your home kitchen.

1 pound lentils, rinsed and picked over

1 teaspoon each dried basil and oregano

1 small to medium butternut squash, peeled, seeded and diced (you want to end up with about 2 ½ cups diced squash)

Spray a large, heavy, non-reactive soup pot with oil, and in it combine lentils, stock or water, chile, and aromatics. Bring to a boil, then turn down heat to low. Simmer, partially covered, about 30 minutes.

Meanwhile, in a large skillet, heat 1-2 tablespoons olive oil over medium heat. Add onion, and sauté, stirring, until it starts to soften, 3-4 minutes. Add the celery and garlic, sautéing another 3 minutes, stirring often. Add this to the soup, deglazing the skillet with a little soup liquid and adding the deglaze contents back to the soup pot. Add salt and pepper; taste for seasoning.

Just before serving, add the lemon juice and stir well. Serve hot, with a lemon slice floating atop each bowl. Pass lemon wedges at the table, so any who wish can make their portion even more lemony.

Editor’s note: Cooking dried beans in a pressure cooker (such as an Instant Pot) can also save some significant cooking time, taking 20 to 40 minutes to cook, depending on the bean, once the device comes to full pressure. Check out the cooker’s manual or an online guide such as this one.