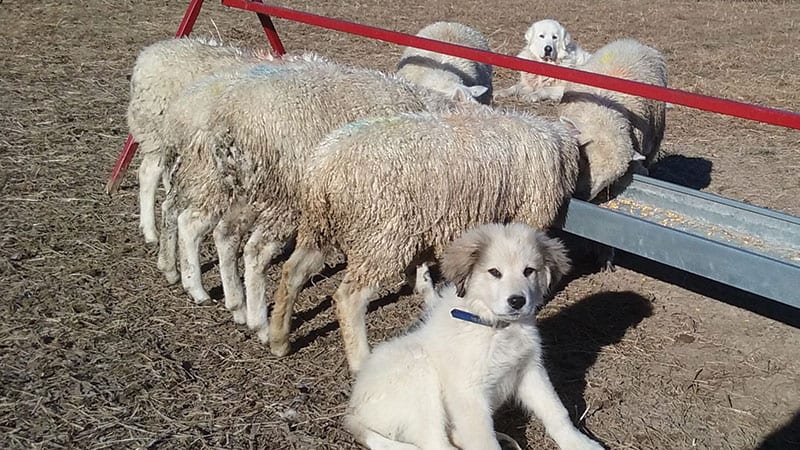 Animals raised on pasture have access to many potential benefits: Fresh air, grass, room to roam. The freedom comes with potential dangers, though—and some farmers are using “livestock guardian dogs” to keep their animals safe.

Unlike herding dogs, who aren’t left alone with the animals, guardian dogs live with the animals they oversee 24 hours a day. They’re working animals, not pets, and they must be trusted to do their jobs without humans present.

As a farmer who relies on such livestock guardian dogs (LGDs), I’ve seen some dramatic displays of how well they work.

Picture this, for instance: Contently wandering across emerald paddocks, chickens cluck, squawk and mumble amongst themselves. Intent stares, bobbing heads and a flutter of feathers indicate unsuspecting insects are on the menu. Overhead a shadow descends on a destructive mission that sends alarm though the flock. Squawks of concern are heard as hens run for cover.

The predator’s shadow catches the attention of the livestock guardian dog. Announcing his presence with deep rumbling barks, Thor runs on a path to intercept. Outstretched talons grasp only air as the eagle adjusts in flight, gaining distance from the newly imposed no landing zone.

It’s an impressive—and natural—way to make grazing a feasible way to raise animals.

LGDs were first used in the United States in the 1970s, but they have been used to protect flocks and livestock for centuries. Illustrations from the 13th century BC and writing from the Roman Empire, 2,100 years ago, reveal guardian dogs among flocks.

Predation on grazing and pastured stock forces many producers out of business. LGDs ability to curtail predation enables the use of grazing resources that wouldn’t be economically feasible otherwise. Through boundary marking, barking, posturing and confrontation, the dogs convince predators to search for meals elsewhere.

Locally, farmers now looking to the dogs for protection include Wilcox Family Farms in Yelm, a major egg producer for PCC. Even after raising poultry for egg production on the farm for over a hundred years along the Nisqually River in the shadow of Mount Rainier, there are always new challenges that arise. Eagles arrive with the salmon run. The abundant salmon provide easy meals; the problems begin when the run is over and the hungry predators look for their next feast.

“After the salmon run last year, we were typically losing up to 15% of the hens to eagles,” said owner Andy Wilcox. “Predation has been an immense challenge. We have tried balloons and other tactics to frighten the predators with limited success; we needed a more dependable strategy.”

Guardian pups arrived on the farm in September. “We have eight Great Pyrenees/Akbash pups that are 6 months old living in pairs in four different paddocks,” Wilcox said. The paddocks consist of 50 to 80 acres with a moveable chicken house that holds 2,400 hens. Hens forage up to 300 feet from the house, feeling more secure close to the building. “Eagles hang out in the trees but haven’t preyed on the chickens in paddocks with the guardian pups. The pups aren’t actively barking consistently yet, but their activity and presence is sufficient to deter the eagles. We are experiencing predation only in those paddocks without the guardians,” Wilcox said

“The immature eagles seem to learn quickly,” if we move dogs to another paddock, they are landing (in the original paddock) and taking hens.”

The pups have curtailed enough predation that Wilcox is now investigating using them throughout the farm. 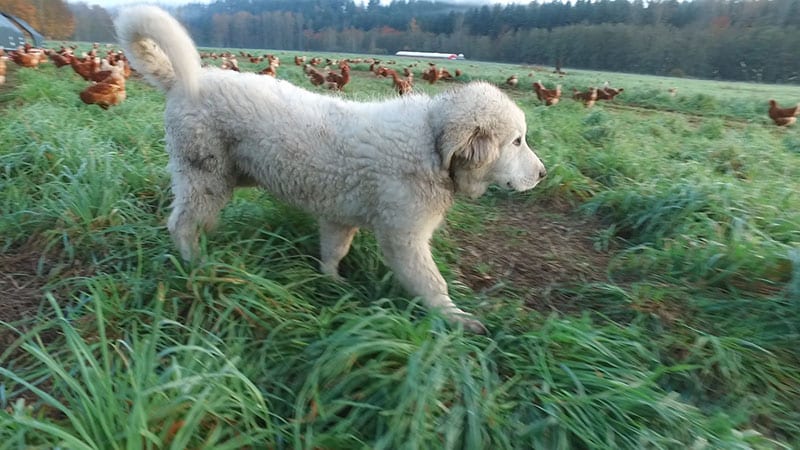 While other types of working dogs, such as hunting hounds, consider small animals as prey, the breeds used for LGDs are natural protectors. Akbash, Anatolian Shepherd, Great Pyrenees and Maremma are the most common LGD breeds in the United States. Of the over 45 guardian breeds found worldwide, the Spanish Ranch Mastiff, Polish Tatra, Komondor and Kangal are also used in the U.S. Each breed has been developed for its native land, stock, conventional management practices and typical predators encountered. Pyrenees and Maremma have a closer guardian style, staying more within the flock. They are also more tolerant of strangers. Some guardian breeds are known for moving livestock away from danger. Akbash and Anatolians are more territorial, patrol large areas, and are more apt to confront threats.

Coyotes and domestic dogs typically cause the most damage to stock and flocks across the U.S. Other predators; wolves, mountain lion, bear, fox and birds of prey, add to the challenges of raising animals in pastures.

Success rates vary by factors that include how well matched the particular guardian breed and its guardian style is to your situation, the genetic guarding instinct in the individual dog, strength of bond and acceptance of the livestock or fowl, and how the pups are raised.

Brian Dietrich of Scio, Oregon, raises LGDs among his flock of Dorset sheep. A working veterinarian as well, he believes good guardian dogs are a product of genetics, selective breeding and good management practices. “I like to have my puppies born in with gentle sheep so they can get that physical connection with the animals they will guard. I feel that physical touch, smell, taste, etc. are important parts of the bond that needs to form—not just seeing their livestock from across a fence. The bond is well-formed by the time pups are 6 to 8 weeks old.”

The bond is paramount—you need a dog that chooses to live with the stock rather than one that prefers the company of other dogs or people. Dietrich’s dogs are raised in increasingly larger lots, rotating pastures with the ewes and lambs. By 6 months old, “they should be able to travel with the flock and be actively ‘guarding’ by patrolling and barking at appropriate threats. You should be able to trust the pups with the livestock at all times. They will continue to grow and develop their guarding skills until they can defend the flock from major threats by 12 to 24 months old.”

There are many opinions on how best to raise guardian dogs. Some people believe young pups can’t be trusted with stock and should be raised without direct contact. Dietrich believes in using selective breeding to produce pups that are trustworthy, not harming or harassing stock in puppyhood or adolescence. Most pups will want to play and chase. Dietrich raises pups with sheep family groups so that the ewes discipline the pups for inappropriate behavior. If the adult sheep don’t end the play then it is up to the humans. “Well-bred pups stop chasing with a simple scolding. Do occasional (exceptions) come along? Of course, but there are a lot less if you breed the best to the best, focus on what you want without making excuses versus settling for mediocrity or propagating it.”

Dog in the henhouse?

Leaving a canine alone with species who other breeds would consider prey comes with significant responsibility.

Appropriate genetics, selective breeding and diligent raising, enabling a strong bond, is the foundation for success. Choosing the best individual guardian, suited to each farm’s unique situation, enables us to entrust the safety of our flocks and herds to their care.

Guardian behavior is instinctual, passed through generations by way of genetics. Their guardian behavior—the perception of a threat and reaction to a threat—cannot be taught. ‘Training” comes into the equation because these dogs live on our farms and in our communities. They need to accept handling and have medical care. Raising the LGD to best fulfill its role requires diligence—and returns great rewards.

Denice Rackley is an Indiana-based writer, veterinary technician and farmer who manages a commercial sheep flock on pasture with the assistance of working Border Collies and Livestock Guardian Dogs.