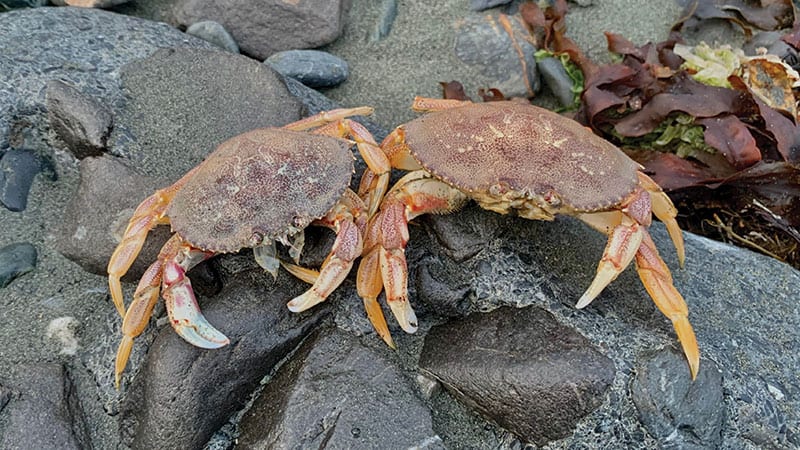 A study has found ocean acidification is already dissolving the shells and damaging the sensory organs of young Dungeness crab off the West Coast. Researchers with the National Oceanic and Atmospheric Administration were surprised to see acidic water having so much impact so soon. The new findings came from studying crab collected from the ocean, but they build on previous lab research that reached similar conclusions, sounding alarm bells for scientists who had thought Dungeness crab weren’t vulnerable to current levels of ocean acidification. (OPB.org)

Michael Pilarski, a longtime organic farmer in Jefferson County, has founded a public reference library in Port Hadlock focused on regenerative agriculture. The shelves in his new space, located at 10644 Rhody Drive, contain old and new books covering a wide range of topics: from herbal medicine to climate change, permaculture design to mushroom foraging, native plants to tropical species. Anyone can come to the library and take a look at any of the books during open hours (see friendsofthetrees.net)—although they are just for reading inside the building, not checking out and taking home. (Port Townsend Leader)

The California-based Straus Family Creamery has become the first zero waste certified creamery. Zero waste certification requires a business to divert 90% of its material from the landfill each year, to have a waste management plan and philosophy, and to have a goal to end the negative environmental impacts from the material it handles. “There’s no secrets here,” said Joseph Button, director of sustainability at the creamery. “We’re only successful if everybody moves in this direction.” (CBS SF)

The Cherokee Nation is banking corn, bean and squash seeds in the Arctic “doomsday vault,” becoming the first U.S.-based tribe to safeguard culturally emblematic crops for future generations. The Svalbard seed vault about 800 miles from the North Pole is the world’s most sheltered storage facility, intended to safeguard as much of the planet’s unique genetic material as possible. The seeds chosen are Cherokee white eagle corn—the tribe’s most sacred corn, used for cultural ceremonies—Cherokee long greasy beans, Cherokee Trail of Tears beans, Cherokee turkey gizzard black and brown beans, Cherokee candy roaster squash and three other varieties of corn. (The Guardian) 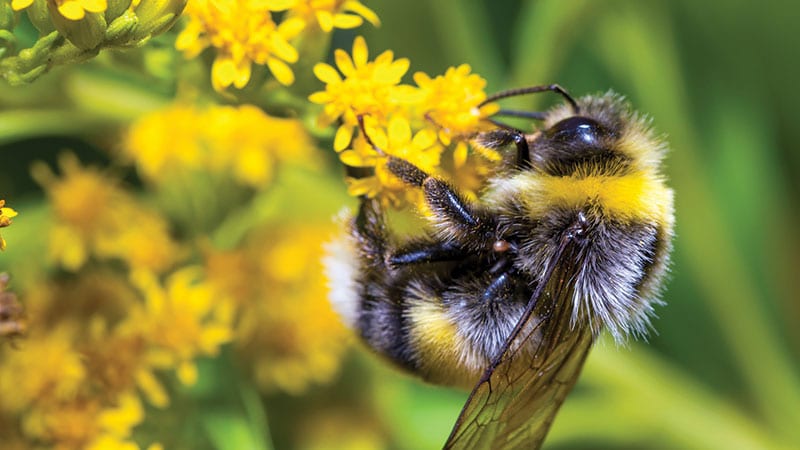 Bumblebees are in drastic decline across Europe and North America owing to hotter and more frequent extremes in temperatures, according to a study in the journal Science. The study suggests the likelihood of a bumblebee population surviving in any given place has declined by 30% in the course of a single human generation, with rates of decline that appear to be “consistent with a mass extinction.” Professor Jeremy Kerr, of the University of Ottawa and the study’s senior author, said: “This work also holds out hope by implying ways that we might take the sting out of climate change for these and other organisms by maintaining habitats that offer shelter, like trees, shrubs or slopes, that could let bumblebees get out of the heat.” (The Guardian)

Four years after Chile embraced the world’s most sweeping measures to combat mounting obesity, a partial verdict on their effectiveness is in: Chileans are drinking a lot fewer sugar-laden beverages, according to a study published in the journal PLOS Medicine. Consumption of sugar-sweetened drinks dropped nearly 25% in the 18 months after Chile adopted a raft of regulations that included advertising restrictions on unhealthy foods, bold front-of-package warning labels, and a ban on junk food in schools. Peru, Uruguay and Israel have also adopted Chilean-style front-of-package labels; Brazil and Mexico are expected to finalize similar labels in the coming months, and a dozen other countries are considering them as well. (The New York Times) 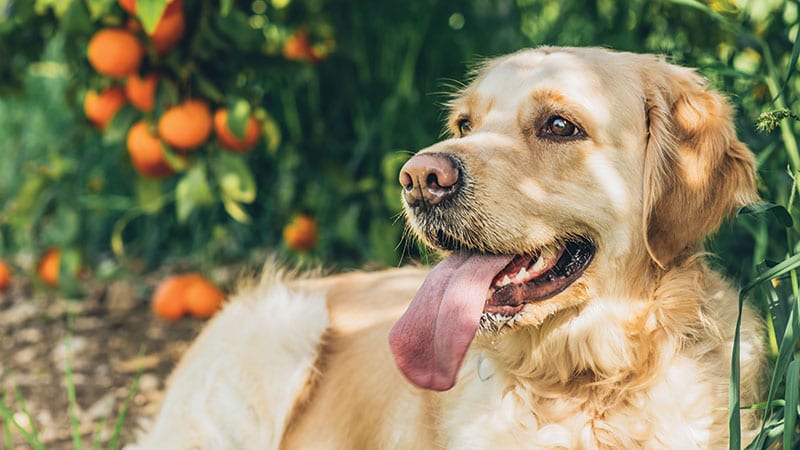 Dogs specially trained by Agriculture Research Service (ARS) scientists have proven to be the most efficient way to detect huanglongbing—also known as citrus greening—according to a paper in the Proceedings of the National Academy of Sciences. Currently, the only solid hope of curtailing the spread of citrus greening is to eliminate trees with the disease as quickly as possible to prevent further spread, and early detection of the citrus greening pathogen is crucial. ARS plant epidemiologist Timothy R. Gottwald with the U.S. Horticultural Research Laboratory discovered that dogs can be trained to sniff out the presence of Candidatus Liberibacter asiaticus, the bacteria that causes citrus greening, with greater than 99% accuracy. (USDA.gov)

Eleven years after its founding, Seattle’s 7-acre Beacon Food Forest is evolving. The urban permaculture project has become a nonprofit, hired its first staffer, and took steps to have its board and leadership better reflect the diversity of the Beacon Hill neighborhood. Other new features include a bee colony and a native plant wetlands area. (South Seattle Emerald)

New York City restaurants and stores will be required to accept cash payments from customers under a bill set to go into effect in January. NYC businesses that go cashless “effectively discriminate against customers who lack access to credit and debit,” says City Council member Ritchie Torres, the lead sponsor of the cashless ban bill, in a statement to Eater. The final version of the bill alleviated some of the concerns smaller businesses had about receiving large bills; for instance, restaurants and stores won’t be required to accept bills larger than $20. (Eater.com)

Miyoko’s Kitchen, a plant-based food manufacturer in California, has sued the state in U.S. district court, claiming labeling regulations from the California Department of Food and Agriculture and its Milk and Dairy Food Safety Branch violate the company’s First Amendment rights. In a letter, state regulators told the company to stop using the phrase “100% cruelty and animal free” on its labels and on its website, as well as dairy terms such as “butter” on its vegan plant butter. The letter also told the company to remove the image of a woman hugging a cow on its website. Other product labeling cases also have relied on free speech arguments (see Labeling Laws Target “Burgers,” “Milk” and Even “Rice”). (FoodDive.com)

Ben & Jerry’s has become the first national brand to offer sunflower butter-based pints to consumers, with nondairy flavors now making up more than a quarter of the company’s total flavor lineup. Similar to several other plant-based ice cream flavors on the market, Ben & Jerry’s other nondairy products use an almond base. By adding a sunflower butter option as well, the company could differentiate its product line, especially as almond farming has received recent criticism for its impact on bees. (FoodDive.com)

Researchers at the University of California, Santa Cruz, have found that the process of making fish sticks, imitation crab and fish fillets using Alaskan pollack has a fairly significant carbon footprint. Their study found this process can generate almost twice as much greenhouse gases as fishing alone. A lot of research has been done about the environmental impacts of land agriculture, but comparatively, we know little about the seafood industry’s effects on climate. (Modern Farmer)

An annual survey on worldwide organic agriculture showed that 2018 was another record year for global organic agriculture. According to the study by the European-based Research Institute of Organic Agriculture, which examined data from 186 countries, organic farmland increased by 2 million hectares (nearly 5 million acres), and organic retail sales reached an all-time high. (FIBL.org)

Seattle food safety attorney Bill Marler has filed a petition with the U.S. Department of Agriculture (USDA)—just as he did regarding E. coli a decade ago—asking it to agree with his legal, scientific and moral arguments to ban dozens of salmonella strains from meat. USDA’s data shows that about one in every 10 chicken breasts, drumsticks or wings that consumers purchase is probably contaminated with salmonella, which largely comes from fecal matter getting on meat during slaughter. If USDA approves the petition, the department would have far-reaching power to recall or seize meat for a variety of salmonella strains. (The Washington Post)