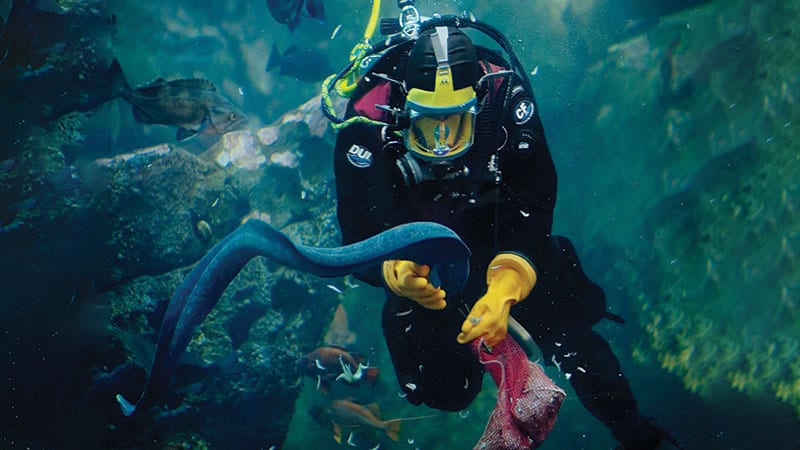 The Seattle Aquarium’s cafe ranks high on sustainable seafood lists. The restaurant serves only “Best Choices” seafood from the Monterey Bay Aquarium’s Seafood Watch and is a leader in the James Beard Foundation’s “Smart Catch” program.

Much of the seafood consumed at the aquarium, though, has nothing to do with the second-floor restaurant.

“The vast majority of the animals we’re feeding are not humans. They’re the animals in our care,” said Erin Meyer, director of conservation programs and partnerships for the aquarium. That’s why the organization recently took a groundbreaking look at the dinner plates—or buckets, as the case may be—of the fish and marine animals who consume roughly 65,000 pounds of seafood there each year.

Supported by a grant from PCC Community Markets, aquarium staff hired a researcher to study the sustainability of the foods fed to those animals. The innovative study considered both the ecological impact and the carbon footprint of each item, resulting in what the Seattle institution hopes will be a model for other aquariums and zoos looking to make a difference. Seafood sustainability researcher Christopher Nagle had to sleuth out details about aquarium purchases, from the gear used to catch the fish to the ways it was transported from ocean water to dock to aquarium door. He looked into “what we source, how much we source, who the suppliers are, and all the information we could possibly gather,” said Meyer.

The meals involve a lot more than powdery flakes. The aquarium’s four sea otters alone can chow through about 15,000 pounds (more than $15,000 worth) of crabs, mussels and other delicacies per year.

The animals “are eating restaurant-grade seafood. We source some of our mussels and clams from Penn Cove Shellfish, which also supplies restaurants in Seattle, like Ivar’s,” Meyer said. The aquarium orders about two dozen different kinds of bulk fish, bivalves and other sea creatures, as well as a separate category of preprocessed supplemental foods like the pellets fed to salmon, plus a tiny percentage of hyperlocal meals, like the lettuce purchased up the street at Pike Place Market for the vegetarians in the coral reef exhibit—or kelp harvested right in the aquarium’s Underwater Dome. 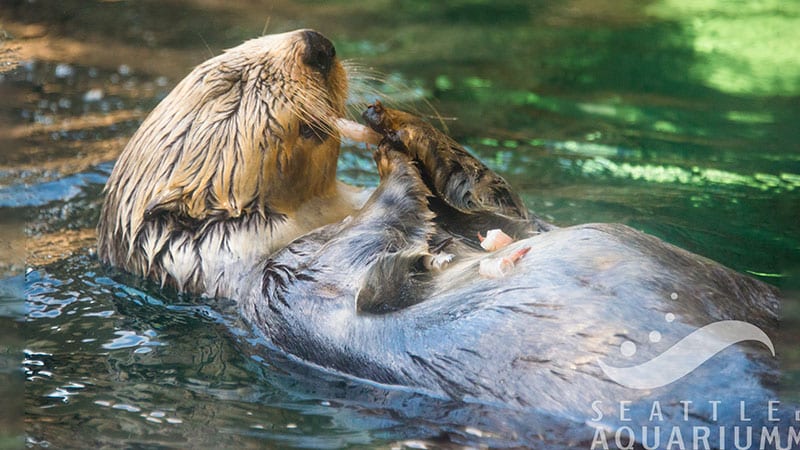 After calculating the overall sustainability of those foods, preliminary results were encouraging. Two-thirds of the seafood fed to aquarium creatures already ranked on the green “best choices” or yellow “good alternative” lists from the Monterey Bay Aquarium’s Seafood Watch list. The remainder have not yet been assessed—none were on the red list of “foods to avoid.” That wasn’t entirely accidental; the aquarium joined Seafood Watch back in 2004 and kept sustainability in mind for animal feed even without formal guidelines.

Simply calculating the data can be valuable on its own; for instance, so they can advocate for formal ratings for as-yet-unrated species that the animals consume in large quantities, such as butter clams from B.C. and Northern Anchovy from California, which account for almost 16,000 pounds of product.

The next step was connecting with the aquarium’s animal care team and veterinarians, starting conversations on moving to a higher percentage of “best choice” foods without compromising the animals’ nutritional requirements or natural diets.

For instance, Dungeness crab is a regular treat for sea otters in the wild as well as in the aquarium. From a fisheries standpoint Dungeness is not a bad choice; it falls just below the border of the best options. The crab’s carbon footprint, though, is less desirable. Any trap-caught seafood, which requires traveling out once to set the traps and then a return trip to harvest, imposes a heavier carbon burden.

Geographically, the results were also promising. About two-thirds of the seafood is sourced from the West Coast or Alaska, the study found, and only two products are partially sourced outside North America—krill from the Falkland Islands off the southern tip of Argentina and capelin from Iceland.

The challenge, again, is how to do better when considering other priorities.

It’s easy to substitute one dish for another on a restaurant menu, or to banish an egregiously bad choice. It’s harder to make that choice for animals whose entire diets are under your care, who have specific nutritional needs and well-defined eating habits.

The krill, which come from Antarctica, are part of the diet for a variety of animals, including several species of birds, fishes, invertebrates and otters.

“Krill is not often found on our dinner plates, at least not whole krill. Harvest is on the rise because the market for ‘shrimp paste’, ‘krill oil’ and ‘fish sauce’ is growing,” Meyer said. “There are only a few places in the world where there are existing fisheries.”

Possible future steps are to scale back on the worst offenders and find new nutritionally sound alternates to offer and see if the animals find them acceptable.

“There are tradeoffs, and we’re trying to walk the line and balance it,” Meyer said.

Luckily, just being headquartered in Puget Sound positions the aquarium well for balance. “Local seafood,” for this region, encompasses an unusual wealth of choices.

“We’re just lucky in where we live,” Meyer said. “We live in a hub of sustainable marine fisheries and aquaculture, so we have access in ways that not every aquarium does.”

More information on the aquarium’s study is available online at seattleaquarium.org.

Membership opportunities: from sampling wine to sharing your voice