The true cost of eggs 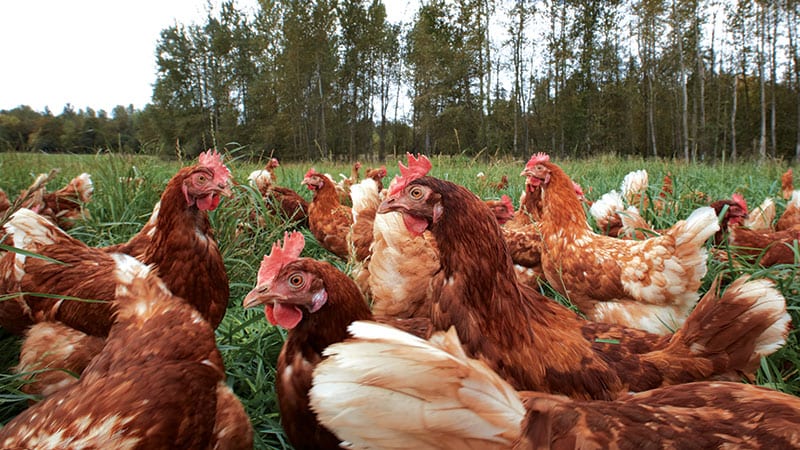 Chickens roaming freely in a field at Wilcox Farm.

If you’ve ever paused before the eggs while shopping and puzzled over why one carton with images of cheerful looking hens costs a dollar or two (or three) more than its neighbor, Melissa Moeller wants you to know she’s been right there with you.

“I was a bargain shopper before we started,” says Moeller, chief egg officer at Misty Meadows Farm, where she and husband Michael raise a flock of 3,000 hens on woodsy pastures near the Nooksack River north of Seattle in rural Whatcom County. “Once I started [raising chickens], it was like, wow, this is a lot harder and a lot more expensive to do it well than I ever imagined.”

To Moeller and fellow Western Washington egg farmers who supply PCC Community Markets — from tiny Skylight Farms along the Snohomish River to comparably giant Wilcox Family Farms in the shadow of Mount Rainier — raising chickens well means, at a minimum, no battery cages. Those are the overcrowded, notebook-paper-sized enclosures banned by the European Union and a growing number of states that prevent hens from stretching their wings, turning around, perching, socializing, or otherwise acting like chickens in favor of increased egg output and streamlined care and feeding.

Raising chickens well also means spending more to ensure their chicken feed is locally grown, sometimes grown right on the premises. It means gathering eggs by hand rather than relying on a conveyor belt to collect them. And, increasingly, it means raising some or all of their hens on pasture: rising with the dawn to ensure the flocks head out into the sunshine—or rain, fog, frost or snow. Hitching the tractor to the hen houses every few days to haul them toward fresh grass teeming with tasty bugs and unscratched dirt for dust baths. Watching the feed bill climb as those chickens work up a bigger appetite from exploring their surroundings. Watching the landscape flourish from the manure the chickens leave behind.

Such scenarios were typical in the days when most U.S. eggs came from family farms rather than factories. That was before factory farm battery cages became common in the 1950s, allowing for increased automation, massively larger flocks and financial efficiencies.

By one report, about 86% of U.S. eggs are now produced by just 63 companies that have at least 1 million hens each. About 99% of all laying hens in the U.S. are owned by companies with flocks of 75,000 hens or more, according to the Agricultural Marketing Research Center.

While eggs weren’t exactly luxuries when small independent farms dominated the marketplace before the 1950s, their prices were far more in line with what we see today for eggs produced in smaller-scale environments with strict standards for animal welfare.

Yet, while prices for consumers remained low, the environmental and ethical costs of producing were mounting. Animal welfare groups protested what they called inhumane conditions, such as when the Humane Society of the United States argued that caged laying hens, “unable even to spread their wings,” are denied many natural behaviors important to their welfare, including the ability to nest. Debates flared about whether battery cages lead to increased risk of salmonella and other health concerns.

Yany Stiebrs still recalls the day his dad came to him in the 1990s and said they were shifting away from cages and installing nests in their barn for their hens.

“Cage-free was really the beginning,” said Stiebrs, who with his wife Sara, raises free-range and pastured organic flocks.

Demand for eggs laid by cage-free chickens is growing due to commitments from hundreds of businesses as varied as McDonald’s, Walmart, university campuses, Norwegian Cruise Lines and General Mills to use only eggs from cage-free birds by 2025. It’s a titanic shift for the egg industry that requires millions of dollars of investment in new housing, training, techniques, and analysis.

It is also a shift not entirely driven by choice. By 2023, it will be illegal to raise or sell eggs in Washington state from any hen raised in battery cages, the result of an advocacy campaign led by the Humane Society of the United States, the ASPCA, and progressive grocers including PCC.

Regardless of the impetus, of the 328 million U.S. hens laying eggs destined for eating, roughly 20% of the flock, or 67 million, were living cage-free in 2019. More than 70% of the flock will need to be cage-free by 2026 to meet projected demand, according to U.S. Department of Agriculture (USDA) Agricultural Marketing Service figures cited by the Egg Farmers of America, an industry group.

But raising chickens in conditions that animal welfare advocates truly consider more humane and dietitians say can yield more nutritious eggs takes extra time, money and effort. It also requires moving beyond “cage-free” to “free-range,” organic and pastured. That also involves a steep learning curve for farmers who must troubleshoot aggressive behaviors like henpecking and even cannibalism, predators from eagles to possums to coyotes, and movement-related injuries. In an understandably price-conscious marketplace, farmers who are taking steps to truly raise their chickens “well” hope it’s clear to shoppers exactly what they’re supporting when they decide which eggs to place in their carts.

“It’s hard to tell that story with just an egg carton on a shelf,” said Petrina Fisher, owner of Skylight Farms and president of Cascadia Cooperative Farms, a group of small egg farmers around the Puget Sound region committed to raising hens on pasture. “We’re wanting to raise these birds as sustainably and humanely as possible.”

Retailers also have a role in helping to tell the story and shift perceptions. Scott Owen, senior grocery merchandiser for PCC, says the cooperative will continue to collaborate with egg farmers to further develop its existing pastured egg programs and provide shelf space for those eggs that continue to drive the industry to stronger and better animal welfare standards.

All eggs carried by PCC are cage-free at a minimum, but the co-op is constantly working on ways to increase viable sales of organic and pastured eggs, which PCC believes represent the future of sustainable egg production.

“Those giant hen houses can have hundreds of thousands of chickens in them. The house is there to collect eggs and process waste. The system is not there to support animal welfare, and that’s really what we’re trying to change,” Owen said. That’s why he ensures that PCC carries a variety of pastured egg options and worked with Wilcox to develop a special mobile hen house for PCC’s private label eggs.

Skylight, Misty Meadows and the Cascadia Cooperative raise eggs from hens who spend their waking hours on pasture. Wilcox and family-owned Stiebrs Farms in Thurston County each raise an increasing percentage of their flocks on pasture.

“There’s a huge need for healthy pasture-raised organic eggs and there just aren’t many people producing them,” said Moeller of Misty Meadows, who started her flock in 2006. “We want to do things right and we don’t want to cut corners when it comes to treating the birds right and treating the employees right.” That has meant a lot of tough choices, from taking on a second job to make ends meet to minding her feed budget with an eye as sharp as the bald eagles who try to swipe her hens. Changing an industry, clearly, comes with a price.

Karen Gaudette Brewer is an award-winning food, culture and lifestyle writer and editor based in Seattle. She began her writing career as a journalist with The Associated Press and has gone on to write for The Seattle Times, PCC Community Markets and Allrecipes. She’s the author of “Seafood Lover’s Pacific Northwest: Restaurants, Markets, Recipes & Traditions.”

Share in the co-op's success. Learn about the benefits of PCC membership, including an annual dividend, local partner discounts and more.