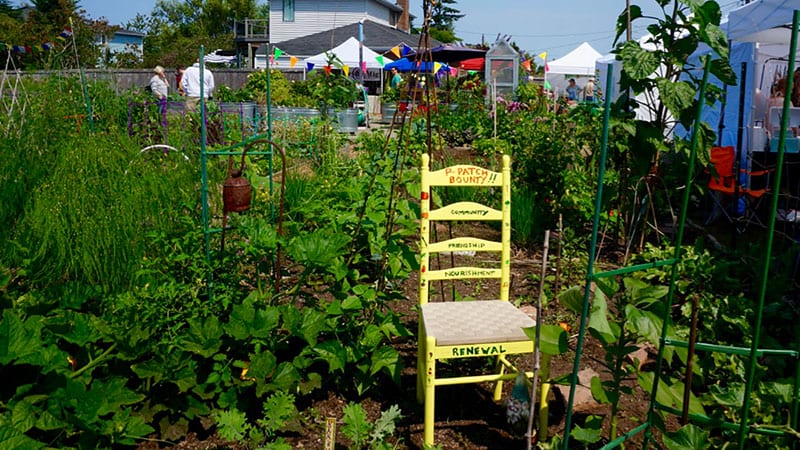 As PCC joins new communities, we also embark on new relationships and collaborations. As we prepared for our Ballard store to open in November, we learned about a remarkable Giving Garden in the neighborhood—and an urgent campaign to preserve its land.

Giving Gardens are dedicated plots of land in which everything that is grown is donated to the neighborhood food bank. They are entirely volunteer-run and supported by the Seattle Department of Neighborhoods and the Seattle Giving Garden Network. Ballard’s garden is housed on one of the oldest plots in the Seattle Community Garden Program, a location that local columnist Peggy Sturdivant called “Ballard’s Eden.” The half-acre plot, the largest remaining undeveloped land in the neighborhood, provides room for 85 family gardens and has been a P-Patch for 43 years.

We were immediately welcomed after walking into a recent Giving Garden harvest and communal meal. An invitation was quickly extended to take a plate and join the dinner, a Tuesday night ritual after harvesting. The gardeners excitedly told us that this year the Ballard P-Patch had donated over 2,000 pounds (a literal ton) of organically grown produce to the Ballard Food Bank, one of PCC’s partner agencies! At the beginning of each season the garden coordinator connects with the food bank staff to learn what produce would be most useful to the food bank that summer and then plants large amounts of requested crops they know will succeed in their garden. We were lucky to see the beautiful bounty of fresh green beans and carrots that had just, moments before, been plucked from the vine and pulled from the ground and were on their way to the food bank while the gardeners and volunteers gathered to celebrate their final harvest for the food bank for this year.

Among the celebration, however, there was an undercurrent of concern among neighbors, volunteers and gardeners. Gardeners asked one another how they planned to overwinter their beds given the unpredictable future of this community gathering space. This year, the families were informed that the land they have grown on for years may be sold and developed to raise funds for necessary upgrades to Our Redeemer’s Church, a project tentatively scheduled to begin in April. Our Redeemer’s had been generously leasing their land to the Seattle Department of Neighborhoods for a mere $1/year for more than 40 years.

Even if the land had to be sold, the gardeners wondered, did it also have to be developed? They immediately began to organize and fundraise to purchase the property themselves, along with support from the Department of Neighborhoods and GROW, the nonprofit agency behind the P-Patch program. Their goal is to raise the $1.8 million needed to purchase this land and maintain it in perpetuity as a community garden and green space. Their busy fundraising efforts have already brought in $50,000.

PCC will be working with the Ballard Food Bank to learn how we can better support its clients and partner agencies like this one. If you would like to get involved in preserving the Giving Garden, follow their journey at mightycause.com/organization/Ballard-P-Patch or contact them at info@ballardppatch.org.

Celebrating holidays in your own way