A life-changing harvest at Quillisascut Farm 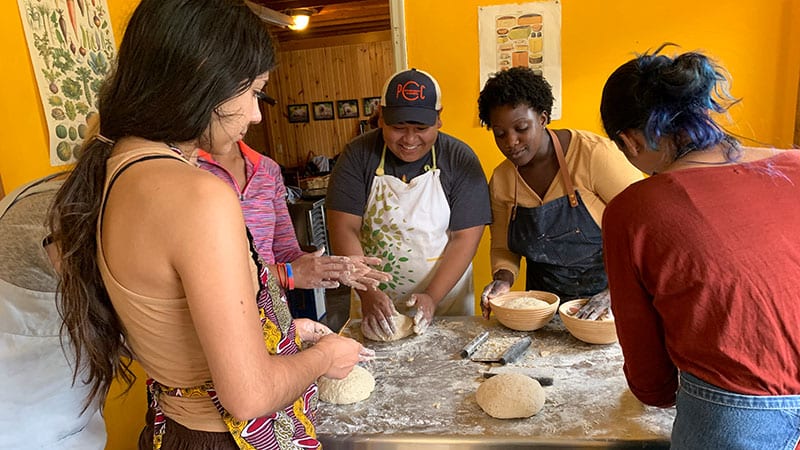 What’s really involved in producing sustainable foods? With less than 2% of Americans living on farms, even people who cook for a living don’t always know what it takes to harvest fruit or milk a goat. At Quillisascut Farm in Eastern Washington, Lora Lea and Rick Misterly make cheese and run a hands-on “farm school” that’s drawn national acclaim.

PCC supplier Kristi Brown, the chef behind “That Brown Girl Cooks” hummus, worked to create a Chefs of Color week at the school and raise scholarship money, filling existing gaps in education and opportunities. PCC has supported the fund, as has Arvin Batingan, PCC’s human resources and recruiting assistant, who also attended the school this year. Here’s a condensed version of the 23-year-old’s experience, as told to Sound Consumer editor Rebekah Denn.

I became connected with Quillisascut after a conversation at That Brown Girl Cooks about what foods people were able to access growing up. Most of us came from families that weren’t well off, and we were used to frozen foods and the cheapest things at the grocery store. We knew nothing about where our food comes from—it was mostly about what we were able to feed our families. From there, it was (Brown’s) vision to create this workshop for accessibility, for chefs of color to learn about sustainability, farming, the importance of farm-to-table cooking, and having that appreciation of the land and resources around the Washington area.

Quillisascut is a five-hour drive from Seattle. You go through the cliffsides of the Columbia River and it’s just a beautiful drive, and secluded, with this little dirt road that leads up to the farm.

I grew up in the Philippines, where my family was taking care of a mango farm. When I moved here to the U.S. it was like that part of my life just disappeared. My family in the Philippines was so deeply connected to agriculture. When I arrived at Quillisascut I had that realization—this is going back to my childhood of waking up in the morning, seeing this farmland and seeing the livestock. This was something that was really missing, and I didn’t realize that until I was able to experience it again.

The program itself is four days where you experience the farmstead life. You have a schedule, from milking the goats to tending to the chickens and ducks and the plants. It was so different from my daily schedule! And you’re eating together as well. The first day we went around the table and talked about how we were all connected to food from all walks of life, from culinary students to executive chefs to line cooks. Karen Jurgensen, chef instructor of Seattle Culinary Academy, is the chef instructor. There were a lot of FareStart employees. With what they do (culinary job training for people experiencing homelessness), they’re so focused on changing people’s lives that this aspect of where the food comes from is sometimes forgotten. With this opportunity they were able to step back.

For me, going into it, I had the mindset that I liked what Chef Kristi wanted to start, and wanted to support it as much as I could. If I experienced the school myself I could share what I experienced with others so I could encourage them to go.

The planting season was mostly over at this point, so we focused on harvesting. Whatever it looked like, even if it had brown spots, we were going to pick it—a lot of stone fruits, tomatillos, a lot of herbs, from your rosemary to your cilantro. We also watered.

We toured farms around the area, where we were able to eat the fruits from the tree. It’s so different. So, so different. It’s so much sweeter, the flavor is so much more prominent when you first pick it. That one moment when we all tasted that peach and plum, we weren’t all sure it was the same fruit! It was so juicy, so sweet.

Butchering a goat was another experience that was life-changing. I think we all found respect for the journey of how our food gets to the table. We had talked about who wanted to wake up early and catch the goat and help it relax as much as possible. Just three people could do that part; having a lot of people would be too stressful for the goat. At 6 a.m. the rest of us headed up to the back of the school, right next to the fire pit, and the goat was hanging up, ready for us to skin and learn about the anatomy.

Butchering is an art form. There’s so much that goes into it, the detail and focus you have to have.

The word of the day was respect. It’s about really using and valuing the resources around you.

Another highlight for me was being in the kitchen with all these people in the culinary world and learning from them. I have not had that kind of cooking experience and was not confident about my abilities. We were split into three different teams, each team was in charge of a meal. We had to focus on what was growing in the garden, what was available to us around that area, with the exception of salt, pepper and oil—although even for oil, we used duck fat to cook our chicken and sauté our veggies.

On the night of the third day we cooked the goat. The team in charge of that made grilled goat and duck hearts; tomato and peach fattoush; grilled eggplant; wood oven-roasted goat legs marinated with winter savory, garlic and olive oil; fresh milled whole-wheat pita; and cempazuchitl (wild marigold) duck-egg custard.

Another team did ricotta gnocchi with wild watercress and walnut pesto. We went to the creek down the street and harvested the watercress during our forage walk, seeing what was available around us. One of the folks that attended used to be a research chef, she did roasted lobster mushrooms with catnip. It was actually pretty good—the catnip was very subtle.

My team, instead of a theme or a culture, we focused on how each flavor connected. We were previously baking bread that day, so we used the oven, since it was still hot, to roast our chicken. We were so fascinated by how plentiful the orca beans were, so our initial menu was Peruvian roasted chicken and then a kohlrabi and orca bean salad, with roti, an Indian flatbread, as well as a roasted veggie and herb aioli. We did peach crumble for dessert.

The salad we were going for did not work, unfortunately. When we tested it and tasted it, it was off. That’s where my level of confidence shifted. I’m so lucky to have met Chef Will Yee, who used to work with FareStart and La Spiga. When we were testing the recipes, he was guiding me, but letting me do it myself. He was saying, “Are the flavors working? Are the textures working? What can we do that’s different? What other flavors can we add?” We completely changed those dishes. For the beans we did harissa spice-roasted beans. The kohlrabi reminded us of Thai papaya salad, the texture, the cuts we made. So we went with a kohlrabi salad using the flavor profile of a papaya salad, using vinegar that was made at the farm.

I was so scared people were not going to like it, thinking “I’m here eating with a lot of people who have fine taste and work in the culinary world.” But it was amazing to hear people’s feedback, that people appreciated what we did and what we’ve gone through as a team. It was reassuring. I can actually cook!

The importance of community

I did take away lessons about sustainability and farm-to-table eating and the importance of all that. But for me, it was about the nights we spent together talking about sharing our resources and how we can help each other and make an impact.

All of this intertwines.

You can make an impact as a person, but when there are other people you share that passion with, you can make a bigger impact—and you can really make changes in people’s lives.

To contribute to the scholarship program, visit qefund.org/donate. Information on Quillisascut workshops are online at quillisascut.com/workshops.