The history of tomorrow — seed saving in a changing climate 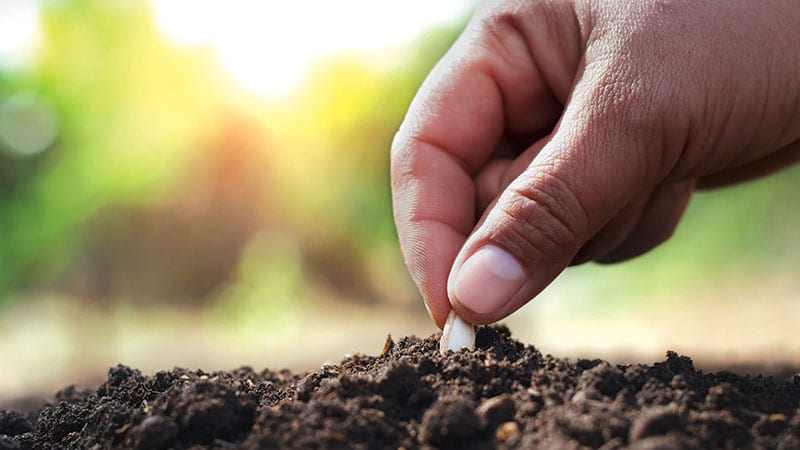 “Climate change is hard to predict, because it is in part defined by its lack of predictability,” Dr. Thor Hanson told me as we walked along a beach in the San Juan Islands.

The renowned biologist and author believes one of humanity’s oldest farming practices—saving seeds—could help farmers blunt these unpredictable but alarming impacts. Hanson and I gathered in the late afternoon light of an abnormally warm March day to talk about these theories and his upcoming book on global warming (tentatively titled “Nature Next”).

As global warming brings greater volatility in seasonal weather patterns, agricultural timelines are beginning to shift. We’re seeing dry months when there should be rain, for instance—or flooding when it should be dry. This variability creates “timing mismatches” among different parts of the ecosystem, Hanson said. Examples around the globe include forest trees leafing out so early that they block the sun and stunt the growth of wildflowers below and increased crop damage from pests who hatch earlier than predators in a warm spring.

“As ecosystems change, the organisms that will do better generally are the ones with greater flexibility,” said Hanson, who has written previous books on seeds, bees and forests. While adaptability always has been an evolutionary advantage, climate change is making it paramount. Current trends are leading to fewer and less adaptable types of plants, when Hanson’s work shows that we need the exact opposite. He believes seeds—and history—hold a key.

The business of seed saving

Each seed that grows food is a summation of the evolution between humans and wild plants. Humans started selecting seed from plants that showed unique characteristics. Throughout time we have weighted the scale in favor of plants with those unique qualities, or stepped in to cross-pollinate them with other plants to create new varieties.

Alarmingly, a large number of varieties are becoming endangered or no longer exist. About 93% of the seed varieties sold in the U.S. in 1903 were extinct by 1983, according to a study published by the Rural Advancement Foundation International.

With recent mergers, four businesses now control more than 60% of global proprietary seed sales (see the Sound Consumer cover story). Various studies confirm that with the concentration of the seed industry, research slows. This lack of innovation is reflected in the lack of variety made available to farmers. The largest seed companies have reduced the variety of seeds offered and have further controlled distribution of the choices that exist.

We need seed diversity like never before. The Intergovernmental Panel on Climate Change estimates that global food production could be reduced as much as 17% by the year 2100 due to crop failures from increased weather variation. The population in the year 2100 is estimated to be 11.2 billion people. Research and diversification will help restore access to seed lines that can handle the environmental stresses of climate change.

Seed breeding often has looked to draw out qualities of color, texture and flavor, but unpredictable weather means plants increasingly are being selected for resiliency.

“People are breeding for challenging conditions,” said Rebecca Morse of Osborne Seeds in Mount Vernon, one of a network of small seed companies working with farms on innovative and historical varieties that will grow well in the Pacific Northwest. She travels to seed conferences across North America, where climate change is a common subject. Breeders, she said, are looking for varieties that can withstand sudden changes in temperature and also longer dry periods.

Hanson believes heirloom and heritage verities of seeds may hold greater capacity for such resiliency. For each year a variety of seed is collected, he said, the plant’s genes record and adapt to the experiences of that season. The longer a seed variety is collected, the more opportunities there are to record different weather patterns and adjust to handle those conditions again. If that seed is saved locally, Hanson said the plant can learn an area’s unique weather, sunlight, soil, diseases and insects and learn to thrive. He compared it to the way languages change over time and by the locations where they are spoken.

As Hanson told me on our walk, “One of the most difficult parts of climate change is how remote it feels. The problem is that we can’t see carbon dioxide.”

We looked out over the water and saw a boat bouncing on the chop. “See, if there was a troop of ogres coming out from behind that boat, we would all know there’s a problem.”

For most of us climate change is a concept as vast as that ocean, and our role in addressing the problem can feel like trying to swim across. This concept can feel even more overwhelming when we consider that climate change may be introducing further crop losses just as our global population reaches record numbers. But improving seed resiliency and diversity can be a tangible step forward.

As the walk came to a close, Hanson wondered aloud, “Maybe the question is if farms of the future will look like farms of the past?” He described how farms historically saved seed and shared with neighbors and neighboring farms. Commercial seed contracts challenge the return of this model by prohibiting and punishing seed saving. In addition, some commercial seed cannot reproduce another generation. But there is a growing movement of small-scale growers and seed houses saving adaptive and heirloom crop varieties. As Morse from Osborne said, “At almost every conference I go to there are new local seed companies popping up, trying to work with small-scale growers.” The local democratizing of our seed genetics may need a bigger role in our future if we are to change with our changing climate.

If you are interested in learning how to save seed, there are a number of resources to explore, including seedsavers.org. Or, consider buying seeds from Pacific Northwest seed houses working toward seed diversification, including Uprising Seeds (carried by PCC), Osborne, Adaptive Seeds or Nash’s Organic Produce.

Get involved for Orca Action Month