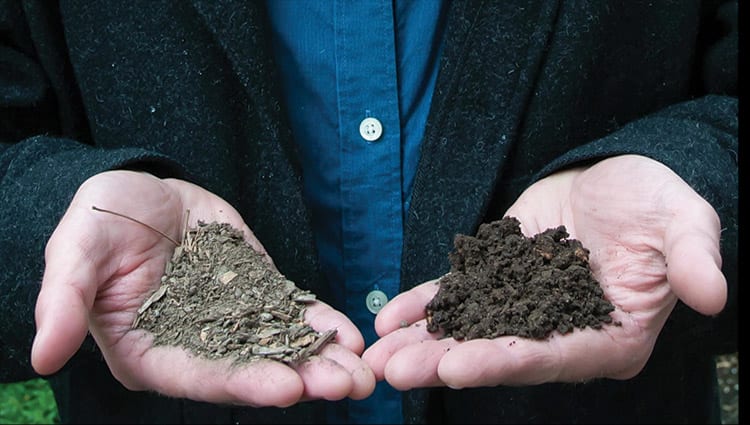 We’re often so focused on getting in and out of the grocery store quickly we don’t consider that every food item in our cart depends on soil.

The United Nations Food and Agriculture Organization’s report, “The Status of the World’s Soil Resources” (FAO and Intergovernmental Technical Panel on Soil, 2015) states, “the majority of the world’s soil resources are in only fair, poor or very poor condition.” It says our soils only will get worse unless we take action.

University of Washington geologist David Montgomery delivers a compelling message about the trouble we face because of our dependence on plowing and agrochemical. In his new book, “Growing A Revolution: Bringing Soil Back to Life,” Montgomery shares hope in the capacity of farmers to reverse the trend of soil degradation.

Microbes are the stars

A better understanding of soil life has taught us that microbes play a critical role in the natural processes that regenerate soil. The area in the soil around plant roots, called the rhizosphere, is where the magic happens. In exchange for releasing food sources for microbes, microbes in turn pull nutrients from organic matter and rocks in the soil that plants need

But, Montgomery explains, heavy fertilizer use can turn “crops into botanical couch potatoes.” When plants stop holding up their end of the symbiotic deal, microbes begin to vanish, creating a cycle that “helps make degraded farmland dependent on nitrogen fertilizers.”

When farmers use a relatively simple set of low-tech practices, however, a different story emerges.

Montgomery traveled around the United States and abroad to see how large and small farmers and scientists are restoring soil fertility –– regenerating soil –– and doing it much faster than he thought possible. Regenerative practices can cut the timeframe from centuries to decades.

Montgomery observed farmers in the Midwestern U.S., Pennsylvania, Saskatchewan, Ghana and Costa Rica –– all using a suite of agriculture practices that he sums up as ditch the plow, cover up and grow diversity. These include: no-till –– leaving soil undisturbed by planting seeds into the residue of the previous crop; using cover crops to build organic matter, suppress weeds, supply nutrients and reduce erosion; and diversifying and rotating crops. The farmers Montgomery met all adopted these three practices, despite working with different soils, climates and crops.

He found that conventional farmers not only increased their soil fertility, but they also kept soil in place, improved the ability of soil to hold moisture, and reduced or eliminated altogether the need for expensive pesticides, herbicides and synthetic fertilizers. Many increased their crop yields, improved their bottom line, or both.

Regenerative farming practices also increased resilience in the face of unforeseen changes, such as drought, acting like a natural insurance policy. Some found they no longer needed crop insurance, which Montgomery says can offer “farmers an easy out for poor practices.”

Often, after witnessing the success of others, skeptical but curious farmers followed suit and discovered the same benefits.

Some benefits of regenerative agriculture, especially increased carbon sequestration in soil and reduced air and water pollution, stretch beyond individual farms. So, too, does farm profitability.

“Restoring profitability to small farms is a recipe for revitalizing rural America,” Montgomery said. “The best infrastructure investment America can make is to restore the fertility of our soil.” Restoring soil health also improves the lives of small farmers in developing nations that are responsible for feeding most of humanity on the planet.

After his farm odyssey, Montgomery concluded that adopting relatively simple farming practices that restore soil health “would help us overcome the daunting challenges of feeding the world and cooling the planet.”

He recommends assistance to help farmers through the initial transition period, policy reform that incentivizes soil health practices, and more demonstration farms where growers can learn firsthand –– and not at their own expense –– about soil building practices.

“With conventional agriculture, we’ve tried to take a small set of ideas and practices and implement them everywhere,” Montgomery said. “What we really need to do is arm farmers with different ways of thinking. We’ve underappreciated the diversity of the world’s soils and underutilized the creativity and ingenuity of the world’s farmers.”

“Growing a Revolution” provides plenty of evidence that farmers are beginning to change how they think about soil health and reverse a long history of soil degradation.

Montgomery reminds us that, historically, societies that do not take care of their soil do not last. Perhaps, he writes, “we really can change the world and write a new ending to an ancient story.”

Sylvia Kantor is a freelance writer based in Seattle.

You’ve probably heard that carrots are good for eyesight, but did you know that the carotenes in red, yellow and purple carrots protect our bodies from a host of other ailments — and may even enhance physical attractiveness?

Letters to the editor, August 2017