The high cost of deporting farmworkers 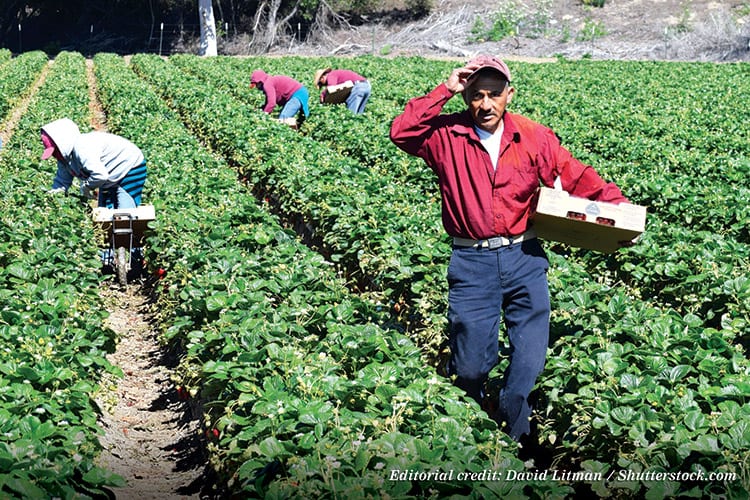 The nation’s history with farmworkers is a perpetually sad story and it took a particularly hard turn in August last year. Then-presidential candidate Donald Trump told supporters at a gathering in Des Moines, Iowa, “On day one, I am going to begin swiftly removing criminal illegal immigrants from this country.” Few voters may have understood at the time how the new administration’s promise could, in effect, impoverish family farmers by destroying their ability to plant, tend and harvest crops. It’s unlikely, too, that voters understood that food shortages are possible as a result of that promise.

“There’s no question we have a tremendous labor problem on farms and ranches,” says Chuck Conner, president of the National Council of Farmer Cooperatives, which represents 2,500 co-ops that pay $8 billion in wages annually. “It’s not a new problem. It’s been progressing for about a decade.”

Hispanic farmworkers officially comprise about 45 percent of all agricultural laborers in the United States, according to the U.S. Department of Agriculture (USDA). But that figure is deceptive because it’s derived from USDA’s surveys that depend on two number-muddling factors. One is that USDA surveyors must be given permission to interview workers by farm owners and operators, whose cooperation — should they be found employing undocumented workers — could bring about heavy fines and/or criminal prosecution.

The accuracy of USDA surveys also depends on the forthrightness of workers, who fear that if they openly admit they’re undocumented, they could face arrest and deportation. Consequently, estimates of an accurate count of Hispanic farmworkers range as high as 70 percent. What Trump’s promise — animated by forceful raids by Immigration & Customs Enforcement (ICE) — has meant to farmers is a severe and sudden labor shortage.

“We’re hearing from farmworkers all over the country that they’re very much aware and afraid of deportations,” says Bruce Goldstein, president of Farmworker Justice. “They’re living in fear that their families will be broken apart.”

Agricultural economist Richard Mines, director of the research group Indigenous Mexicans in California Agriculture, says he’s been surveying migrant farmworkers for about 40 years. Currently running a farmworkers’ survey on California’s central coast, he notes that Hispanics are noticeably absent from not just farms but everywhere.

“People are intimidated by the atmosphere. People are not coming out of their houses,” says Mines. “They don’t look for jobs. They only go to employers they trust. It’s just too dangerous to travel.”

Fewer are working. Fewer are selling in public spaces.

Will O’Donnell, executive director of the Washington Association of Farmer’s Markets, notes, “I’ve heard concerns expressed by managers that Latino farmers aren’t even applying to sell at the markets.”

The president of the Washington State Tree Fruit Association, Jon DeVaney, says he was concerned earlier this summer about the scarcity of labor when the state’s cherries were expected to ripen three weeks later than the annual projection.

Seasonal changes in weather, combined with a fearful workforce, mean an unpredictable labor supply — and the possibility that crops could be left rotting in the fields, if they get planted at all. “

“We’re hearing a lot of concern from employers about what the enforcement climate might be,” DeVaney explains, “and there are limited options available to recruit or document workers.”

The most infamous option is the H-2A Temporary Agricultural Workers Program that allows farm owners to apply to the U.S. Department of Labor (DOL) “to bring foreign nationals to the United States to fill temporary agricultural jobs.”

By March of this year, DOL had approved guest worker visas for 62,272 farmworkers, but that’s only about 12 percent of hired farmworkers needed for U.S. farms, based on 2017 USDA and U.S. Bureau of Labor projections. But critics of the H-2A program say it’s a borderline indenturedservice program, given it requires workers to stay locked in the position they were hired for, up to 10 months, or else return to their country of origin.

That gives farm-labor employers enormous leverage over workers. If a farmworker arrives to find working conditions in no way match what the employer advertised, she or he runs the risk of being accused of a crime or other offenses, and early deportation if s/he voices a complaint. “The H-2A recruitment system has led to numerous documented cases of debt-peonage, human trafficking and forced labor,” according to Farmworker Justice’s labor report, “No Way to Treat a Guest.”

In early May, DOL filed a lawsuit against Santiago Gonzalez of Arizona, alleging that he housed farmworkers in four cramped, filthy and windowless buses rather than the hotel he cited on his guest worker application. Gonzalez, owner of G Farms, which produces watermelons, onions and potatoes, was approved by DOL to pay a minimum $10.95 an hour. Once the farmworkers were on site, he instead paid them $0.13 to $0.70 per bag of harvested crops, according to the Los Angeles Times.

For more ethical farm owners, the H2-A program requires careful administration. They must “demonstrate that there are not enough U.S. workers who are able, willing, qualified and available to do the temporary work.” They also must “show that employing H-2A workers will not adversely affect the wages and working conditions of similarly employed U.S. workers.”

In practical terms, the paperwork means employers must apply far in advance of a harvest to get applications through the bureaucracy. Farmers must buy local advertising or otherwise demonstrate they’ve tried to recruit workers from the community.

If a U.S. citizen is proven to have been displaced by an H-2A worker, the employer may be fined $16,000 plus all lost wages for the displaced employee.

DeVaney argues that the only employers who can afford labor recruiters, attorneys, transportation costs for laborers, certified vehicles to transport farmworkers, the means to build and maintain housing — and still have enough in pocket to cover potential DOL fines — are large farms and conglomerates.

“It’s an administrative burden for smaller growers,” says DeVaney, “and those are the growers that feel it most acutely when there’s a labor shortage.”

He believes a hidden consequence of the guest worker program will be the loss of more small farms in Washington. “We’re not seeing a loss in acreage,” DeVaney observes, “We’re seeing a loss in the number of farms.

We’re seeing consolidation” driven by corporate operations that have the muscle to hire under the H-2A scheme.

Yet the demand from employers for H2-A workers is so perpetual that 102 members of Congress last year signed a joint petition to U.S. Labor Secretary Thomas Perez and the director of U.S. Citizenship and Immigration Services, basically begging those agencies to expedite the annual backlog of applications. What they wrote is echoing across the farms of America: “These delays are devastating to growers and ranchers that cannot wait to plant, tend and harvest.”

So what would the nation lose if ICE shut down the temporary migrant labor force? According to the National Bureau of Economic Research, the cost would be about $5 trillion in goods and services over the next decade.

In addition to much of the food we put on our plates.

According to 2017 figures from Immigration and Customs Enforcement, U.S. deportations reached a historical peak during the Obama Administration in 2014. Nicknamed “Deporter in Chief” at the time, Obama’s administration expelled 87,690 undocumented people from January 20 through April 24 that year.

By comparison, Trump deported 54,564 people during the same timeframe this year — 62 percent of Obama’s number.

What’s different — behind the sudden disappearance of many migrants from U.S. farms and other workplaces — is increased xenophobia that surfaced with the new administration. Agricultural survey worker Ed Kissam says, “They’re making life significantly more miserable for immigrant families but they [immigrants] can’t go home. Not easily. Not when some of them have children born here, when their wives and families are here. Not when they’ve lived here 20 years or more.”

Joel Preston Smith is a journalist and the author of “Night of a Thousand Stars & Other Portraits of Iraq.

Letters to the editor, August 2017

PCC Board of Trustees report, August 2017

Board Trustee Report, Who is on the Board Now?, What are the 2017 – 2018 Board Committees and Appointments?, and more