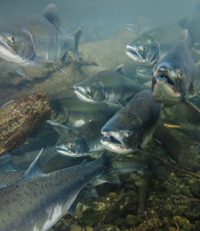 Applegate, a leading natural and organic meat brand, announced its commitment to remove GE ingredients from its entire supply chain — from animal feed to finished products — with third-party certification.

Consumers are prepared to put sustainability before price and brand when it comes to seafood, according to a 16,000-strong survey commissioned by the Marine Stewardship Council (MSC). Globally, consumers said they would spend 11 percent more for sustainable seafood.

More than 1.2 million acres of U.S. federal and tribal wildlands were sprayed with about 200 tons of herbicide in 2010. Herbicides originally were developed to suppress weeds in crop agriculture but now are used in natural areas or wildlands to control non-native plants, which can cause considerable ecological and economic harm.

AquaBounty has conducted field trials of its GE AquAdvantage salmon in Argentina and Brazil. Previous field trials took place in Canada and Panama. GE salmon is not yet on the market.

Washington state environmental regulators have submitted their new water-quality rule to the Environmental Protection Agency (EPA) for approval. The so-called fish consumption rule sets tougher limits on how much toxic pollution cities and businesses can discharge into lakes, rivers and marine waters. The standards mean that if a person eats a daily 175-gram serving of fish from Washington waters for 70 years, the resulting chance of that person developing cancer will be one in 1 million.

Monsanto has been selling new GE soybeans resistant to the powerful herbicide, dicamba, even though the EPA has yet to approve the weedkiller. An Arkansas scientist says he now sees soybean leaves scrunched into cup-like shapes because of illegal dicamba use.

The real cost of food

Consumers don't pay the true price of food at grocery stores and restaurants — the social, economic and health costs often aren't factored into the prices we see on receipts. But some companies — including many brands sold at PCC — are demonstrating that meeting global demands for food, making a profit and doing so sustainably are not mutually exclusive.

Without sweeteners or added ingredients, plain yogurt is a canvas for creativity. Learn about its health benefits (hint: fat equals flavor and health!), and about five yogurts we love.