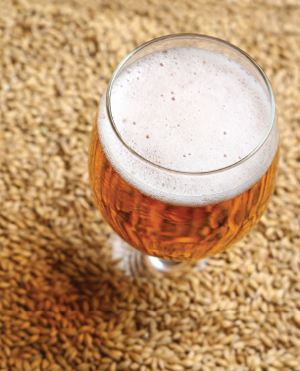 Hops have been the top emphasis for many local craft brewers. But hoppiness is not the only route to microbrew happiness, and a Skagit Valley company that is malting local barley, helped by university plant breeders, willing farmers and adventurous brewers, is poised to trigger a major change in our beer palate.

“Malt is the soul of beer,” says Charles Finkel, co-founder of Pike Brewing Company, which was the first brewer to use Skagit Valley’s malted barley. “The flavor, the sweetness, the roundness, the mouthfeel, the character … everything about it — even the word beer — comes from barley.”

Malt is also the major ingredient. Our much revered hops, Finkel says, “are the seasoning and the preservative.” In a pure beer recipe of water, barley, hops and yeast, the hops account for 1 percent of the beer. “Malt is to beer,” he says, “what grapes are to wine.”

Barley is malted by cracking the hulls, steeping it in water, heating it and turning it so that it starts to germinate. Then it’s kilned and cured to stop that process and remove much of the moisture, and the germinated rootlets are removed. It’s ready to combine with water and heated to make the wort, which is the basic beer. Hops are added, with more cooking. Finally, yeast is added to trigger fermentation.

Not all barley is suitable for craft beer. Barley varieties have varying enzyme and protein levels that are key to the brewing process. Today’s commodity breweries require high-protein barley but bulk up with cheaper rice and corn, resulting in a blander product. Microbrewers, prizing richness and flavor, avoid additives and seek unique, lower-protein malt. Until recently, most were importing it from Great Britain and Germany.

“It’s slightly disingenuous for a local brewer to source its barley from Europe,” Finkel says. So when he heard of a local maltster, he jumped at the chance. The resulting Pike beers have been on PCC shelves for nearly a year.

The Skagit might be an unlikely place for a maltster, because grains are not a primary crop in the valley today. It is known for flower bulbs, but also a variety of vegetable crops, grown both for fresh eating and for seed. Barley is planted as a rotation crop to let the soil rest, and then dug back in to add organic matter.

Although crucial to ensure soil fertility, the crop itself had very little value, and when Dr. Steve Jones was assigned by Washington State University (WSU) to head up the crop research center in the valley, he heard about it from farmers, at a breakfast meeting his first day on the job in 2009. “They said we want you to work with grains, because we have no value in that part of our rotation,” Jones recalls. He knew that the valley is “an incredible place to grow grain,” which indeed used to be the major crop. “It was wall to wall oats.”

In pioneer days, 100,000 acres of oats fed horses and loggers working the forests. But today, when total production for all Skagit crops is 80,000 acres, amber waves of grain are only to be seen when the primary colors of tulips have faded and the last potato has been dug.

So the WSU plant breeders set about to steer growers to varieties that would produce a higher yield, while making connections that would enhance marketability. “We’re finding varieties that work for the farmer,” says barley breeder Brigid Meints, a WSU graduate research assistant working with Jones.

They also honed in on desirable qualities, such as lower protein levels, and studied how those could be beneficial. And they found some lower-protein varieties in the six-row barley types, which are not considered by the large maltsters and growers, who only use two-row barley crops. Meints also found some hull-less types, like Purple Egyptian, that are showing promise and getting craft brewers excited over the potential rich color as well as the flavor.

Meints is also experimenting with food barley. “One thing l like to do is prepare a meal with the same variety of barley that I’m drinking in my beer,” she says. Chefs have taken notice. One of her barleys is being featured in a geoduck risotto at Seattle’s Canlis restaurant.

At the first WSU field day for Jones’ research center, which showcases research and connects farmers with other interested parties, Jones introduced an entrepreneur, Wayne Carpenter, to a barley grower and a maltster from British Columbia who also were attending. Carpenter, retired from the computer world and Jones’ next door neighbor, was inspired. He went home, designed a high-tech machine to malt small quantities of barley, and started experimenting.

In the last four years, as the small batches have received raves from brewers and restauranteurs, he has scaled up the equipment to malt 10 tons of barley at a time, still one-tenth of the size of the macro-maltster’s tools, but enough to fuel a microbrewer’s operation. Growers began to try regional barley varieties, and Carpenter precisely controls the malting environment and tracks the unique qualities of each resulting malt.

One promising barley strain, Alba, released by Oregon State University in 2012, became the source of the first “single-malt beer” for the craft brewers. Pike’s “Locale” (pronounced low-kale) is a Kölsch-style pale ale that Finkel says expresses the valley’s terroir and its newer No. 4 is a balanced session IPA. Bellingham’s Chuckanut Brewery uses Alba in its Mexican Style Lager, and Mount Vernon’s Farmstrong Brewing Co. features the malt in its Salvador American Sour ale. Other makers of craft beer and spirits, such as Seattle’s Westland Distillery, are experimenting with the malt as well.

The local malt is more expensive than the imported product — it can approach twice the cost per pound, says Finkel. But economies of scale are bringing the cost down, and the value of a beer produced with entirely local ingredients has resonated with customers and brewers alike.

The community has responded enthusiastically. Farmers are getting more for their barley, and growing for flavor as well as for quantity. Skagit Valley Malting was supported by the Port of Skagit County in locating at its industrial park. The company was the first non-ag entity to be given an award for supporting local agriculture by Skagitonians to Preserve Farmland. Chuckanut is building a brewery right next to the maltster. Fairhaven Organic Flour Mill is around the corner, and a new bread mill, Biscuit Ridge, is opening.

The potential for bakers so resonates that the malting company this year also was nominated for a James Beard Award, Jones’ WSU facility is named The Bread Lab, and the venerable King Arthur Flour is opening a Baking School at the Bread Lab, the only one outside its home campus in Vermont.

Meints is researching barley varieties for a number of uses.

Like coffee and wine, craft beer has become a defining culinary product of our region. The famous hops that spike bitterness into our brews are already on the lips of beer lovers everywhere. Soon to join the parade are the sweet, subtle, locally produced malts that result from singular barley varieties sprouting in Skagit Valley’s rich terroir.

Bill Thorness is the Seattle author of “Cool Season Gardener.”

PCC is helping fund farm-to-school education in our region.

The new PCC store in Bothell opened in July. It features a rotisserie, a Mexican-style Taqueria, full-service meat and seafood counters, and a produce department that's 95-percent organic.