A voice for the living soil

This article was originally published in March 2016 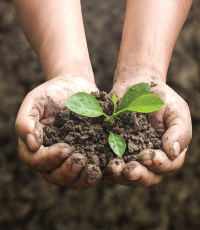 The January Sound Consumer article, “A quiet crisis: the rise of acidic soil in Washington” accurately describes what is probably the most far-reaching threat to conventional food production. Although our remarkable soils have had the ability to buffer and mask the harmful effects from being poisoned systemically by commercial fertilizers for some time, they quickly are becoming unable to produce. If soil acidification is not abated at the least, or reversed at best, food insecurity — on a local as well as global scale — surely will follow. It’s already here in many areas. This should get your attention!

To understand, let’s dig into the battle in the soil. Chemically, nitrogen — particularly ammonia and urea-based fertilizers — acidify soil by releasing positive (+) charges. These also happen to be the most affordable forms of nitrogen. Lime (calcium carbonate) combines with these positive charges and reverses acidification.

But correction isn’t easy. Lime must be mixed with several feet of top soil, not just applied to the surface in order for the reaction to occur. Applications of acidifying nitrogen fertilizers have been occurring — and accumulating — since the 1940s. At an average application rate of 50 pounds of nitrogen fertilizer per acre for the past 75 years, this works out to 3,750 pounds/acre. To restore the soil to its original pH would require about 10,000 pounds of lime on each and every acre!

In Washington state there are about 15 million acres under agricultural production on 35,000 farms with an average size of 434 acres, according to the U.S. Department of Agriculture National Agricultural Statistics Service. The lime needed just in Washington state would be more than 150 billion pounds, or 75 million tons, or 6,818 train loads of lime! Who is able to purchase this much? What quarry will it come from? And how will it be distributed? Economically and logistically, it can’t happen.

Yes, these claims are generalized. Acidifying nitrogen fertilizers are applied at lower rates on dryland farm soils in central Washington and perhaps only every other year, while soils in the Columbia Basin under center-pivot irrigation or in the Palouse get much more. Since soils can buffer, we don’t need 100-percent restoration to get productive results. Still, this threat remains a colossal sleeping giant that never should be awakened. Farming and the environment go together.

Organic nitrogen from legumes, livestock “waste,” and “free-living” bacteria (soil microbes) under rotation with grains and vegetable crops mean we never will acidify the soil on our organic farms. They will remain productive in perpetuity. Since we really are stewards taking care of that which is not our own, these resources will be passed on to our children in better condition than when we began farming.

As inspired customers, you can choose to purchase only organic foods. Seemingly small acts can and do add up. Nothing happens on the organic farm without the financial incentive provided by our urban partners in regenerative agri-culture!

For an interesting read on this topic I encourage you to read “Dirt: The erosion of Civilizations,” by David R. Montgomery. It traces soil use and abuse through history.

Together, we can create a new history that future generations will look back on, admire our resolve, and remark, “They understood, they got it right!”

PCC Natural Markets is offering a choice in fresh berries so you, our members and shoppers, can decide for yourselves how you'd like to respond to a call to boycott the Driscoll's brand.

Please vote in PCC's 2016 elections! PCC members will have the opportunity to adopt a new set of bylaws — the rules that govern operations of our cooperative — for the first time since 2008.