"A quiet crisis": The rise of acidic soil in Washington 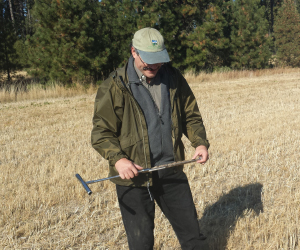 Gary Wegner first noticed the problem in 1991, when a field on his family’s farm near Spokane produced one-fourth the usual amount of wheat. His father and grandfather attributed the problem to farming on shallow soils, but Wegner decided to dig deeper. Lab tests revealed a surprising result: the soil had become acidic.

Wheat farmers now are seeing this problem across the inland Pacific Northwest. The culprit, as far as anyone can tell, is the abundant use of synthetic nitrogen to increase crop yields, a practice that otherwise has revolutionized production over the past half century. Over time, however, it has contributed to a soil health problem that has farmers worried about the future of farming in the Palouse.

“We can pretty well nail it down to the addition of nitrogen to our soils for crops,” says Paul Carter, an agronomist with WSU Extension in Columbia County. “In 1940 or 1950, nitrogen was applied at five pounds per acre. Now, in some areas, we’re up to 100 or more pounds per acre.”

Pullman-based U.S. Department of Agriculture soil scientist David Huggins describes soil acidification as a “quiet crisis.” Quiet, because it can be masked by other types of problems and because farmers haven’t looked for it. Quiet also because most people aren’t aware of soil health challenges farmers face as a result of increasing pressure to produce more food.

But it’s nonetheless a crisis. At stake is the sustainability of wheat farming in Washington. The state’s third-largest commodity crop, wheat represents $1 billion of the state’s $10 billion agriculture sector .

“Race to the bottom”

Soil pH, Huggins says, is a “master variable” that affects almost everything: soil microbes, plant diseases, the ability of plants to access nutrients in the soil, the effectiveness of herbicides, and how long they take to break down in soil — all of which can affect crop yield.

“Some farmers say it’s a race to the bottom,” says Wegner. “The more you put on to raise yields, the more you have a pH [acid] problem.”

When Carter arrived in Columbia County in 2005, a handful of farmers were concerned about acidic soil locally. But he began to suspect the problem was more extensive after talking with farmers in other parts of the Palouse.

Carter collected soil samples from 76 farm fields across Columbia County and discovered acidic soils were far more widespread than he had thought. Ninety-seven percent of the fields were acidic, with a soil pH below 6. Most plants are happiest when the soil pH is 6.5. Lentils and peas, common rotational crops for wheat growers, get into trouble below 5.6 and wheat below 5.2. Changes in soil pH are exponential. Some of Carter’s soil samples were as low as 4.2, a nearly 1,000-fold jump.

Soil acidification is not easy to recognize.

“Farmers and agronomists who aren’t familiar with the problem are sure it’s something else,” he says, “a chemical that didn’t work right, or tolerance to herbicides, or that certain diseases are worse now.”

Growers in the Palouse haven’t typically tested for soil pH, Huggins says. Even when they have, the results may not have shown a problem, given the way soil traditionally has been sampled.

In response to growing concerns, farmers and scientists now are rethinking soil sampling techniques. Accurate soil testing, sophisticated mapping, and measurement of crop yields are the cornerstones of a new approach to farming called precision agriculture.

Acidification is relatively easy to reverse with the addition of lime to soil. But the practice is expensive. To avoid wasted effort and help preserve the farmer’s bottom line, Carter and Huggins are exploring new methods and equipment to ensure that lime is applied more precisely.

Aided by technology such as satellite mapping and remote sensing, it allows farmers to apply inputs, such as fertilizer, pesticides and lime, only when and where they’ll have the most impact. It could help farmers be smarter about nitrogen use. In the long run, it could lower costs, be easier on the soil ecology, and contribute to the overall sustainability of farming.

Applying nitrogen for decades has created what ecologists call a brittle situation. Like a weakened immune system, it has decreased the capacity of the system to be resilient to stress.

“We’ve gone through a golden age of resource use where we’ve relied on our soil’s natural capital and we’ve basically used a large portion of it up,” Huggins says. “Now, we have to pay much more attention to this resource [soil] in order to keep it functional.”

Sylvia Kantor is a science writer at Washington State University. This article is adapted from an original version published by Crosscut.com.

Tell FDA: what is "natural?"

The U.S. Food and Drug Administration (FDA) is seeking your input as a consumer on how it should define "natural" for food labels. Please participate by February 10.

PCC Board of Trustees report, January 2016

Board meeting report, Bylaws update, 2016 board slate, and more