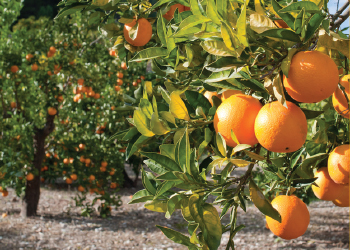 Thinking of Florida commonly conjures up images of sun-kissed beaches, Disney World and orange juice. In fact, Florida orange juice has been an icon in American culture for most of the 20th century, a staple on the American breakfast table for decades. What many don’t know is that the Florida citrus industry is under serious attack, being devastated by a disease known as Citrus Greening.

The disease has its origins in China and spread to South Africa in the 1980s, Brazil in the early 2000s and Florida in 2005. It spreads through an insect smaller than a grain of rice, known as the Asian Citrus Psyllid. The psyllid carries pathogenic bacteria in its gut that it injects into the tree when feeding upon its leaves. Once infected, the bacteria spreads to the root system, setting in motion a devastating series of symptoms including premature fruit drop, small misshapen fruit, nutrient deficiencies and even tree death. Poor fruit quality is another significant issue; diseased fruit sometimes is small and sour relative to normal.

Citrus Greening disease has been confirmed in all 33 citrus-producing counties in Florida. The University of Florida reports the disease has caused $4.5 billion in economic damage and resulted in the loss of 8,300 jobs. The citrus crop is in rapid decline, with a current U.S. Department of Agriculture crop forecast of merely 74 million boxes. Compare that to 166 million boxes of juice oranges produced for the 2008-2009 crop, preceded by harvests of 240 million boxes in the early 2000s.

Recently, a University of Florida economist projected that production would fall to just 27 million boxes in 2025 if a cure isn’t found. The expense of growing citrus recently has more than doubled since 2005. As a result, many citrus growers are faced with the harsh reality of half the yield at double the cost in their operations.

Non-organic citrus growers and researchers are working on a wide variety of solutions to Citrus Greening. Efforts range from traditional breeding of resistant varieties to genetically engineering citrus with transformed genes from a spinach plant. Other strategies include breeding of sterile psyllids, thermal therapies to raise the temperature of the trees and kill the bacteria, antibiotics, and aggressive nutrient programs to stimulate tree health and vigor. To date, nothing has shown itself to be a final, reliable solution.

On the organic front, Uncle Matt’s Organic currently is conducting joint research with The Organic Center in cooperation with several University of Florida scientists. PCC Natural Markets has contributed $15,000 to support the research for an organic solution. One area of organic research uses organically approved materials, such as neem oil, natural pyrethrin insecticides, and beneficial bacteria and fungi to control psyllids. Another uses antimicrobial therapies, such as thyme oil. A third area of research identifies and genetically analyzes “escape” or “survivor” trees within existing organic citrus groves that display high levels of natural resistance.

As with all organic producers, at Uncle Matt’s, maintaining healthy soil is the foundation of disease resistance and control. For instance, the company uses compost and compost teas to increase biological diversity in soil.

Florida citrus faces its greatest historical challenge. Citrus production is at its lowest point in more than 50 years. Research efforts are underway to solve the problem, but only time will tell if they’re sufficient.

As Uncle Matt’s continues to remedy the epidemic in its own groves with certified-organic measures, the entire industry must work together to find a cure. Partnering with The Organic Center, as well as other organizations in the public and private sector, hopefully will yield results that are sustainable and effective. Until then, citrus growers strive to overcome the challenge of Greening and keep Florida orange juice on American breakfast tables for the next generation.

You may notice spotty availability and higher prices on citrus and citrus juice, a direct result of Citrus Greening. Please continue to support Uncle Matt’s and other organic producers.

You can support research on organic alternatives to controlling Citrus Greening by donating to The Organic Center.

PCC Board of Trustees report, January 2016

Board meeting report, Bylaws update, 2016 board slate, and more