Quel fromage! A surprising twist in the "French Paradox?" 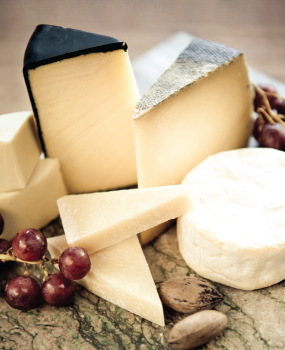 For decades, we’ve watched the French eat twice as much cheese as us Americans, while enjoying much lower rates of heart disease. This “French Paradox” led researchers on a quest to explain why French people’s extraordinarily high saturated fat intake doesn’t lead to more heart attacks.

“Contrary to prevailing dietary advice … there is no excess cardiovascular risk associated with intake of saturated fat.” This statement, published in the British Medical Journal this year, represents the changing view of dietary fat and health.

Milkfat is the best source of naturally occurring trans fatty acids, such as conjugated linoleic acid (CLA). Unlike the synthetic trans fatty acids in margarine, trans fatty acids in dairy from ruminants, such as cows, goats or yaks, appear to provide health benefits including a reduced risk of diabetes, cancer and heart disease. These ruminant trans fats are produced in the digestive tract of the animals and are found in greatest quantity in 100-percent grass-fed, whole-milk dairy products.

Lower lactose: better for everyone

Cultured dairy products, such as cheese, sour cream and plain yogurt, taste less sweet and more tangy because of their reduced lactose (milk sugar) content. Many people with lactose intolerance can eat cheese and yogurt safely because most of the lactose is pre-digested by the “good bacteria” in these cultured foods.

This lower lactose benefits everyone, not just those with lactose intolerance. Lactose is broken down in our digestive tract and becomes galactose, a potentially pro-inflammatory sugar. The reduced lactose content of fermented dairy could result in less milk-induced inflammation, and might also explain why researchers are finding different health impacts between consumption of fermented dairy and non-fermented dairy.

Fermented foods are popular because of the health benefits of probiotic bacteria, but fermentation enhances the nutritional profile of milk beyond just the probiotic benefits. Fermentation boosts milk’s vitamin content (K, folate, B-12 and biotin), CLA content, and supports gut health with unique prebiotics and probiotics.

Cow’s milk contains only traces of vitamin K, but menaquinone, a far superior form of this nutrient (also called K2), is produced by bacteria during fermentation. The highest food sources of vitamin K2 are hard cheeses, such as Gouda, Swiss and Gruyere. The unique benefits of K2 were identified only recently, but research is mounting confirming K2’s benefits for bone health and disease prevention.

During fermentation the proteins in milk are broken into smaller peptides, and these peptides may improve blood pressure and immune function. Molded cheeses produce additional nutrients that early research finds provide a beneficial impact on inflammation and heart health. The longer cheese ripens, the more nutritious it becomes.

What dairy products are fermented?

A growing body of research is questioning the common assumption that low-fat dairy foods are the healthiest choices in the dairy aisle. Evidence is accumulating that full-fat, fermented dairy may be the best option for supporting heart health, reducing inflammation, and even preventing obesity and diabetes. The Dietary Guidelines Advisory Committee recently suggested we stop stressing about dietary cholesterol and total dietary fat — but it has not yet changed its opinion on saturated fat.

Most of the published research on dairy in the past five years is from Denmark and Sweden, two countries with the highest dairy consumption. There’s cause to be skeptical about some of these studies since researchers often are funded by the dairy industry.

Early nutrition studies lumped all dairy products together for statistical analysis, so it’s encouraging to see researchers dissecting the health impacts of fermented, whole-milk and grass-fed dairy. It’s very likely that the difference between “drinking milk” and “eating dairy” is a significant and important distinction.

We're programmed to seek deliciousness. For thousands of years, flavor gave our bodies crucial information about nutrients. Lately we've turned that system against itself.

PCC Board of Trustees report, November 2015

Get to know your trustees, Board report, Bylaws update — Questions?, and more

With 49.1 million Americans going hungry at some point in the last year, there's little question our wealthy nation has a moral and social obligation to help those in need.