With 49.1 million Americans going hungry at some point in the last year, there’s little question our wealthy nation has a moral and social obligation to help those in need. According to Northwest Harvest, one in five children in Washington is food insecure. Finite resources and increasing demand mean organizations around the Northwest are seeking creative solutions to get healthful food to people in need.

“We bring in bins of fresh organic lettuces, and huge bags of sugar snap peas. We’re donating healthy organic produce to people who normally would be getting peanut butter and mac ‘n’ cheese,” says Jude Berman, who co-founded Seattle’s Giving Garden Network. The organization is entirely volunteer-run and started as a way to coordinate the gleaning programs at Seattle’s P-Patch gardens.

“Community gardening is as much about the community as it is about the gardening,” Berman says. “People come together around a common cause and the whole becomes much greater than the sum of its parts.”

Lettuce Link reports that these efforts, combined with donations from Marra Farm and the Seattle Community Farm, delivered 55,198 pounds of fruits and vegetables to more than two dozen food access organizations in the Seattle area last year. Berman says, “The whole idea is not to let any good produce go to waste.”

It takes a community

The Natural Resources Defense Council estimates about 40 percent of food in the United States is wasted. Last year, Food Lifeline was able to recover almost 40 million pounds of food from local restaurants, grocery stores, food manufacturers, hotels, hospitals and corporate campuses that otherwise would have gone to compost or landfill.

“Our work at Food Lifeline is not just about recovering food, it’s about educating and advocating,” says Dani Turk, director of community programs. “Often the people who are benefiting from the emergency food network have jobs, but they’re in a hard place where maybe they’re deciding between buying food or medication. We know that within the food industry, a lot of folks want to advance their zero-waste initiatives, and we want to help them do that while helping their neighbors in need.”

Through its Seattle’s Table program, Food Lifeline recovers unused prepared food for nearby hot meal programs at partner locations. “We also are trying to build community. We want people to know there are hungry people right down the road, and they can help,” Turk says.

Community involvement is the most important sustainability strategy at the Good Cheer Food Bank on Whidbey Island. In addition to food it receives through Food Lifeline and Northwest Harvest, it also utilizes donations from island farmers, runs a fruit tree gleaning program, maintains an onsite farm, and hosts a couponing team that sifts through 100 local newspapers each week to maximize the amount of healthful foods the food bank is able to offer.

The couponing was started by a food bank client who wanted to give back. Executive director Kathy McLaughlin-McCabe says, “She said my favorite thing, which is: ‘I have a great idea, and I’ll do all the work.’ Most people offer up a great idea and walk out the door.”

As cities and towns around Puget Sound grow and change, the creativity and commitment of hunger relief efforts are more important than ever. In a perfect world, no one would go hungry. In our messy, imperfect world, creative and compassionate communities must work together to make sure hunger is a temporary state. 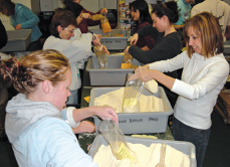 PCC’s Food Bank Program has been making a difference in our community for more than 25 years. With your donation, we purchase nutritious bulk foods that are most needed at our 12 partner food banks — grains, beans, soup mix and more. For example, one dollar donated can purchase 19 servings of pinto beans for families in our community.

“The deli items from PCC are some of the most popular items at the food bank,” says John Rittenhouse, the Issaquah Food & Clothing Bank manager. “It’s wonderful being able to have delicious, healthy food from PCC to offer to our clients.”

PCC further avoids food waste by donating foods from other departments, including dairy and organic produce.

We're programmed to seek deliciousness. For thousands of years, flavor gave our bodies crucial information about nutrients. Lately we've turned that system against itself.