PCC Board of Trustees report, June 2015 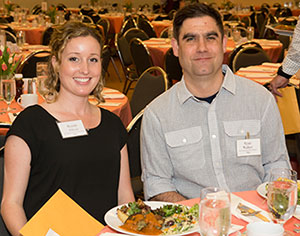 (l-r) Brandy Oliver and Ryan Walker were two of the 70+ table captains. 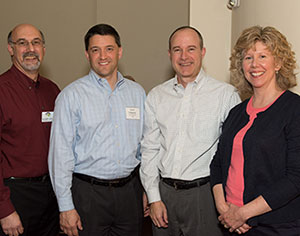 On Tuesday, April 28, 2015, PCC members and guests met at St. Demetrios Hall and were treated to a wonderful meal. Recipes for the meal, all from the amazing PCC Cooks recipe files, and a link to the meeting evaluation are available on the PCC website. Copies of the meeting presentations will be online soon. 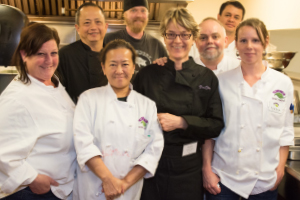 Our team of chefs gave us a beautiful Mediterranean menu and our buffet servers were all PCC Cooks assistants.

The member meeting featured annual reports from the board and management on the state of our co-op. Board chair Maggie Lucas noted highlights of the board year and thanked retiring trustee, Stephan Tan, for his nine years of stellar, tireless service. The board introduced our new CEO, Cate Hardy. Hired in late January, Hardy delivered her first co-op status report including an announcement that PCC will begin home delivery by the end of 2015.

Members heard from our four board candidates. Each spoke for a few minutes about themselves and why they want to serve you. After the meeting, members had the opportunity to chat with the candidates in the lobby of the venue.

The evening included a spotlight on our new store in Columbia City (opening in mid-summer). Store director, Scott McCormick, gave a history of our presence in Seward Park and announced the sale of that property to Third Place Books. Third Place owner, Ron Sher, shared a rendering of the property and announced that a new restaurant will be part of the development. 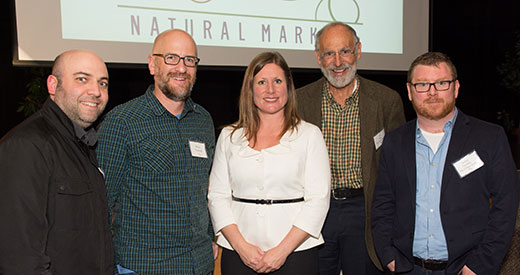 McCormick gave members a preview of what the Columbia City store will look like and talked about the relationships PCC is developing in the community. He announced that PCC will be the named business sponsor of this year’s Columbia City Farmers Market.

The May 26 meeting report will be published in the July Sound Consumer.

The June meeting will be held on June 30 at the co-op office beginning at 5 p.m., with member comment period at 5:30 p.m. The board asks that members who want to comment RSVP to board@pccmarkets.com so that they might plan the agenda accordingly.

Learn about the collapse of the Pacific sardine fishery, the rise in U.S. honey production, why California olive growers are turning to almonds, and more!

Like blackberries and apples, wild salmon have a fresh season — and it's happening right now. Read about the health benefits of PCC's wild, Alaskan salmon plus chefs' cooking tips for King, Sockeye and Coho.