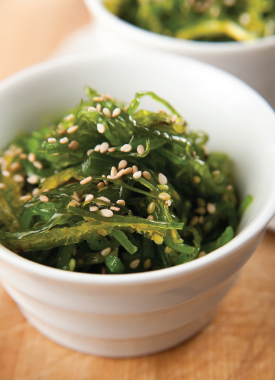 “Delicious taste” is the translation of the Japanese word umami — the fifth taste sensation that’s not as commonly recognized as the other four — sweet, salty, bitter, sour, umami. Umami was discovered in Japan in 1908, yet it continues to be a foreign concept for many eaters in the United States.

Umami enhances all flavors in a dish, allowing us to use less salt, sugar and fat when cooking — without sacrificing deliciousness. Chefs use umami-rich foods, such as Parmesan cheese and soy sauce, to provide the “wow factor” in their cooking. Food manufacturers enhance umami with flavor additives, such as autolyzed yeast extract and monosodium glutamate (MSG).

Umami comes primarily from glutamate, an amino acid found in varying amounts in all foods. Glutamate usually is bound to other amino acids as part of larger protein molecules, but when glutamate is “freed” from other proteins, it produces the umami taste. Kombu seaweed is by far the highest food source of free glutamate and provides characteristic umami flavor in dashi, a Japanese cooking stock.

Free glutamate content increases as foods ripen, age or are fermented. For instance, sun-dried tomatoes have quadruple the amount of free glutamate as fresh tomatoes, and tempeh contains 15 times more free glutamate than unfermented soybeans. Fermentation and aging transforms the flavors of these foods, in part by freeing the glutamate to produce umami.

Human breast milk also contains free glutamate (ten times more than cow’s milk) and, therefore, umami is one of our first taste experiences, along with the sweetness of lactose. Some researchers hypothesize that the early umami experience in infancy teaches humans to seek out foods that contain glutamate, possibly because glutamate-rich foods are protein-rich and very nutritious.

All foods are listed as mg free glutamate per 100g food

Learn more about umami-rich foods at PCC and recipes that feature this distinctive taste.

For a variety of reasons, MSG has earned a bad reputation, despite the fact that researchers have been unable to link the suspected “Chinese Restaurant Syndrome” to MSG. Some declare MSG is an excitotoxin — a substance that overstimulates neural cells and damages the nervous system — but it’s unclear if normal dietary exposures can raise blood glutamate levels high enough to cause trouble. MSG is not permitted at PCC.

Some people do have varying reactions to MSG, such as headaches, sweating, flushing, muscle tightness, and general weakness, and the Food and Drug Administration recognizes “MSG symptom complex” as a short-term reaction to MSG ingestion, impacting approximately 1 to 5 percent of the population. Researchers have found that more people react to MSG when it is consumed alone without any food.

The food industry often relies on glutamate-rich ingredients, such as autolyzed yeast extract and hydrolyzed vegetable protein, to produce umami in packaged foods, such as soups, chips and other savory foods. Autolyzed and hydrolyzed ingredients (often derived from soybeans) have been processed so the proteins are broken down and the glutamate becomesfree, rather than bound to other proteins.

Hydrolyzed and autolyzed ingredients are used as flavor enhancers and contain free glutamate, but they’re not the same as MSG. Autolyzed yeast, for instance, contains between five and 20 percent glutamate, whereas MSG is 100 percent pure glutamate that has been isolated (and bound to sodium). Autolyzed ingredients do not trigger reactions in most people who are sensitive to MSG, although a minority of consumers can be extremely sensitive. These very sensitive consumers often assume — mistakenly — that there’s “unlabeled MSG” in a food when it’s truly autolyzed or hydrolyzed ingredients that trouble them.

Glutamate is the exact same amino acid (protein) whether it is found in seaweed or MSG, and we all consume about 13 grams of glutamate every day. The difference in how delicious it tastes and how the body reacts to it is predicted by how isolated it is from other proteins.