Tiny plastics in products and our food chain

In honor of Earth Day, April 22, take some simple steps to curb plastic pollution every day.

None of PCC’s body care products contain plastic microbeads. Microbeads are tiny balls of plastic that have been detected in more than 200 different consumer products including facial cleansers, soaps, sunscreens and toothpaste.

There are 5.25 trillion pieces of plastic debris in the ocean. That includes 269,000 tons that float on the surface, plus some four billion plastic microfibers per square kilometer deep down in the seas. Those figures were affirmed in three separate scientific papers published last year.

Humans simply are manufacturing more plastics than the demand for recycling can absorb, if they’re put into the recycling stream at all. We currently recover only five percent of the plastics produced. Some are remade into durable goods but roughly 50 percent are buried in landfills, and much of it remains lost in the environment, where it ultimately washes out to sea. The problem isn’t just large plastic bottles, bags and cell phones that are well-known in the gyres at sea. (An ocean gyre is a large system of circular ocean currents.)

Plastic as an ingredient

We now have to contend also with hidden plastic ingredients in bodycare products. Plastic “microbeads,” which act as exfoliants, are in many body care products, such as shampoos, face washes and cosmetics. More than 1,100 personal cleansing products in conventional stores reportedly contain microbeads. A single tube of face wash may contain more than 330,000 microbeads.

Why is this a problem? These tiny plastics end up in our oceans and other waterways and directly impact fish and wildlife. When PCC found out about microbeads, we contacted vendors to make sure our product offering isn’t complicit. Our buyers also give preference to products in glass.

A growing list of fish species have been documented with plastic in or around their bodies. When marine animals consume plastic trash, mistaking it for food, it can cause internal blockages, starvation and death.

As plastic particles circulate through oceans, they act as sponges for waterborne contaminants, such as PCBs, DDT and other pesticides, and toxic polycyclic aromatic hydrocarbons that wash through watersheds. Scientists are studying whether these pollutants transfer to the marine organisms that consume them.

There are potential human health impacts of toxic chemicals entering the marine food chain through plastics. Science is beginning to ask: Are the chemicals absorbed in plastics getting into the tissues and blood of animals that eat plastic? Are these chemicals increasingly concentrated when we eat seafood?

Klean Kanteen in 2004 introduced the first hydration bottle made from 18/8, food-grade stainless steel to give people a safe, healthy alternative to plastic. Its bottles are sold at PCC. Along with other companies, including ACURE Organics (also sold at PCC), it has partnered with the 5 Gyres Institute, a nonprofit ocean advocacy group.

5 Gyres has received more than $65,000 in cash and products from Klean Kanteen since 2012 as a part of the 1% For the Planet network. ACURE donates 1 percent of proceeds from sales of its Brightening Facial Scrub to 5 Gyres’ “Beat the Microbead” campaign.

The 5 Gyres Institute’s research on microbeads already has led to major shifts in manufacturing and policy. Its scientists found high levels of microbeads in the Great Lakes — higher than most oceans worldwide. On average, the team found about 107,500 particles per square mile.

5 Gyres shared these results with manufacturers of personal care products that use microbeads. Many of them — Unilever, L’Oreal, Colgate-Palmolive, Johnson & Johnson, The Body Shop, and Procter & Gamble — agreed to phase out the beads from their products. Unilever said it planned to move toward other exfoliants, such as silica and walnut skin. A statement from Johnson & Johnson says the company will stop using microbeads by 2017.

In policymaking, a bill in Washington state to phase out personal care products made with plastic microbeads has come under criticism from some scientists. They argue that if the bill requires only that companies substitute beads made of biodegradable plastic, it would not reduce water pollution since these plastics also don’t degrade in marine environments.

5 Gyres was critical of a similar law passed in Illinois last year. It also targeted only non-biodegradable plastic microbeads. 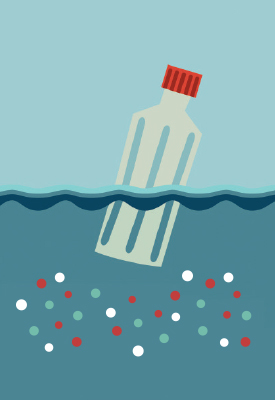 PCC doesn't shy from taking on complicated and often uncomfortable but necessary product issues and consumer concerns. It has become part of our co-operative culture to embrace the challenges as a gatekeeper for food standards.