This article was originally published in November 2014

The state has a clear duty
to protect the environment
to ensure that foods such
as fish and shellfish are
safe to eat.

There’s a battle at the state level over how much local fish we’re supposed to be eating and it all hinges on the state’s water quality standards. Even if you only occasionally eat local fish, the controversy impacts us all.
The state’s water quality standards have been one of the hottest controversies Governor Jay Inslee has taken on since he took office in 2012. The pressure has been intense. 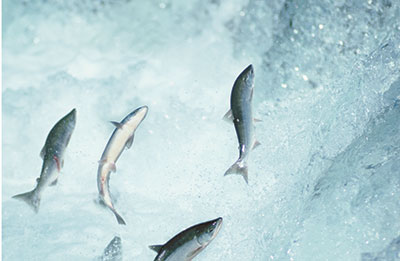 Big business has pushed, hard, to minimize water quality protection and allow the levels of pollution it believes are necessary to boost the economy. Native American tribes, environmental organizations and the U.S. Environmental Protection Agency (EPA) have pushed just as hard to increase water quality standards and protect human health and the ecosystem.

In July the governor proposed what he characterized as a compromise. In a nutshell, the proposal is to raise the state’s Fish Consumption Rate (FCR) from 6.5 grams per day, or about one meal of fish or shellfish per month, to 175 grams per day, or such a meal every day. That probably would have satisfied the tribes, the environmental organizations and EPA’s Clean Water Act requirements. But his proposal would increase the “acceptable” cancer risk rate tenfold, from 1 in a million to 1 in 100,000.

To make up for that loss of protection, Inslee proposes a statewide toxics reduction effort to require legislative approval and funding. This idea wasn’t seen as a suitable substitute for an updated state water quality standards rule that carries the force of law. Neither the tribes nor the environmental organizations were satisfied, and EPA didn’t anticipate it would meet the total maximum daily load (TMDL) requirements of the federal Clean Water Act.
To the average consumer all this must seem like a jumble of bureaucratic alphabet soup. Why should John Q. Citizen care about TMDL or FCR, or whether pollutant discharge levels are permitted at 1 part per 100,000 or 1 part per million?

Isn’t the point just to have jobs and a healthy economy? That’s the industry perspective.

The state has a clear duty
to protect the environment
to ensure that foods such
as fish and shellfish are
safe to eat.

“Such a change would significantly impact the state’s ability to attract new business and new jobs,” Mark Johnson of the International Association of Machinists said in response to the governor’s proposal. “Sudden and dramatic changes to the state’s water quality standards also would restrict or freeze expansion plans by existing businesses, including Boeing.”

Environmental organizations and the tribes heartily disagree, emphasizing the importance of clean water and a healthy ecosystem to healthy people and a sustainable economy. Treaty tribes in the state have united in saying their treaty-protected rights to fish are at stake. They also point out that they, as well as others, consume more than the 175 grams that would be protected under the governor’s proposal.

“Support for that amount is a huge concession by tribes,” said Russ Hepfer, vice chair of the Lower Elwha Klallam Tribe and commissioner to the Northwest Indian Fisheries Commission. “Most tribal members, as well as Asian Americans and Pacific Islanders, eat far more than 175 grams of fish and shellfish per day. Current studies show daily consumption rates of 236 to 800 grams,” he said, adding that while the 175 gram level might have been a satisfactory compromise, the increased cancer risk in the governor’s proposal negates that.

“Do you think anyone who gets cancer from the pollution in our fish and shellfish would find that risk rate acceptable? Would you?” asked Hepfer.
One thing is clear. The governor’s proposal will spur debate in the upcoming session of the state legislature. “The state has a clear duty to protect the environment to ensure that our treaty foods such as fish and shellfish are safe to eat. If not, those rights are meaningless. We will not put our hard-won treaty rights or the health of our children in the hands of the governor or state legislature,” said Hepfer. “We have lost far too much already.”
Steve Robinson is a public relations and intergovernmental relations expert with more than 40 years in tribal and non-tribal government and corporate public affairs.

Steve Robinson is a public relations and intergovernmental relations expert with more than 40 years in tribal and non-tribal government and corporate public affairs.

PCC has implemented a moratorium on bringing in new organic foods containing the controversial ingredient, carrageenan.

PCC Board of Trustees report, November 2014

Next board meeting, Nominating committee, Ends reporting, and more