PCC Board of Trustees report, August 2014

The final meeting of the 2013-2014 board was held on June 24. The board received year-end reports from each of its standing committees — Board Development, CEO Evaluation, Finance and Member Relations. Each committee chair reviewed the past year’s work plans noting completed tasks and recommendations for next year’s committees.

The 2014-2015 board, including newly re-elected trustees Carol Binder, Julianne Lamsek and Bruce Williams, officially was seated. Binder and Lamsek were elected to their third terms. Williams is now entering his second term. The board elected Maggie Lucas to serve as chair for the second consecutive year. Binder was elected to represent the board on the 2014-2015 nominating committee. She joins Karen Gaudette Brewer, Janet Hietter, Leanne Skooglund Hofford, Sara Walsh and Julie Tempest, who were elected by the membership in the 2014 election.

We will report on the July board meeting in the September Sound Consumer. The next board meeting is September 30 at 5 p.m. at the co-op’s business office, with member comment period at 7 p.m. 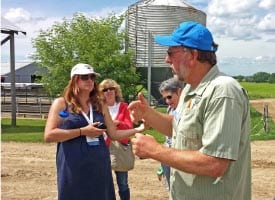 Maggie Lucas and Karen May (second and third from left) are shown on the Krusenbaum dairy farm in Walworth County, Wisconsin.

Your board’s work year began in July and we are really looking forward to the new challenges.
We are very pleased to see the initial success of our cooperative’s new store at Greenlake Village (opened June 4) and we are looking forward to becoming part of the Columbia City neighborhood in 2015. It is wonderful that PCC’s growth has allowed us to serve more members, provide more good jobs, and partner with more farmers, producers and community groups, all without compromising our product requirements, environmental standards or cooperative principles.

In the coming year, your board will choose a new CEO to lead PCC in these efforts. It will be a challenging but rewarding year.

Look for events throughout the year where we will invite you to join us in learning and sharing sessions. We’d love the opportunity to meet you and thank you for your continuing support.

Three PCC trustees, Maggie Lucas, Karen May and Sandy Voit, attended the annual Consumer Cooperative Management Association (CCMA) conference held in Madison, Wisconsin in early June. At CCMA, speakers and trainers from outside the food co-op sector supplement the contributions of local and national co-ops. CCMA attendees are primarily managers, staff and board members of food co-ops, although other types of co-ops also were represented. There were more than 500 attendees from approximately 140 co-ops.

Lucas noted, “I came away from this half-day tour amazed at the complexity of managing a dairy herd under the organic standards and so grateful that there are farmers willing to do this challenging work. We learned about the homeopathic remedies used by the vets who care for these animals, the micro-hornets and grazing rotation used to help reduce the pesky fly population, and the ultra-high level of care taken to test the products for highest quality.

“The Organic Valley Cooperative embodies the cooperative principles we want to support,” Lucas continued. “It requires all members of its highest leadership to be participating farmers, and chooses those leaders via democratic vote. Standards and policies likewise allow input from all the co-op’s members and are rigorously enforced. Member farmers are guaranteed a fair price for their product in advance, which is a tremendous benefit in an industry so much at the mercy of the market. Organic Valley is a great example of cooperative principles in action bringing a valuable product to consumers. As a PCC member I’m proud that we partner with Organic Valley, and I feel lucky to have this choice when I shop.”

The annual conference is rotated annually among East/Central/West regions. Next year the conference will be in Boise, Idaho.

The Environmental Protection Agency (EPA) used faked data in order to win approval of biosolids as a safe form of compost. An EPA whistleblower reveals in his new book, "Science for Sale," that he was forced out of EPA after publicly condemning biosolids.

A major study published in the prestigious British Journal of Nutrition claims conclusive evidence that organic crops — and foods — are nutritionally superior to conventional crops and foods.

The Alaskan government received results from the U.S. Food and Drug Administration (FDA) on radiation testing of Alaska seafood and the results confirm seafood in the North Pacific and Alaska waters poses no radiation-related health concerns.