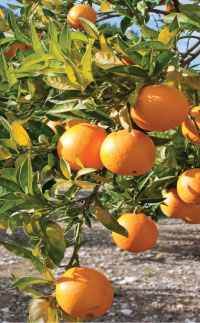 2014 fall Chinook returns could be the biggest on record in the Columbia and Snake rivers. The strong numbers reportedly are due in part to favorable ocean conditions, water spilling over dams during migration season, and good habitat.

Citrus growers lost about $441 million in revenue due to an early December freeze in California’s Central Valley. About 30 percent of navel oranges and 40 percent of remaining mandarins reportedly were destroyed.

California may be stricken by drought, but it’s celebrating a record wine grape harvest for 2013. The state’s preliminary crush report says 4.23 million tons of wine grapes were crushed in 2013, an increase of 5 percent over the 4.02 million tons crushed in 2012. One of the reasons for California’s second bumper crop in a row is that growers have been planting more grapes.

Oregon lawmakers will not restrict pesticides suspected of causing bee die-offs in the state last summer. The state Senate did, however, pass a bill requiring more education for licensed pesticide applicators using the chemicals and creating a task force focused on protecting bee health.

USDA is expecting a 26.6 percent decrease in U.S. net farm income in 2014. Much of the decline is attributed to corn and soybean prices, but fruit, vegetable and nursery producers are expected to see a 24 percent decline in average cash income.

Starfish are dying by the tens of thousands up and down North America’s Pacific shores and nobody knows why, but researchers say they don’t believe the cause is radiation from the Fukushima nuclear disaster in Japan. The starfish are dying in a gruesome way — their arms detach from their bodies and crawl away.

From all-purpose tile cleaners to phosphate-free dish detergents, PCC carries cleaning products that are safer for you and the environment.