Soil & sea: Reports from our producers

This article was originally published in January 2014 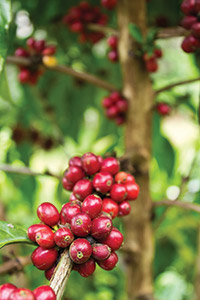 Tony’s, one of PCC’s organic, fair trade coffee vendors, is one of the top 10 purchasers of fair trade coffee — the company has purchased just shy of 5 million pounds of fair trade certified coffee over the last 10 years. The purchases contributed to more than $77,000 in community development funds in 2012, in addition to the price per pound paid to the coffee co-ops.

Citrus trees across Florida are threatened by a major outbreak known as Huanglongbing (HLB) or the “greening disease.” The disease is caused by a bacteria spread by flying insects. When infected, an orange tree will produce green, unripe fruit and eventually die.

Growers say last fall was the worst season in recent memory for the quality of Timothy hay and alfalfa grown in the Columbia Basin. Rain damaged the crops and delayed harvest.

Shorter-than-expected walnut crops in California and China have pushed prices to near record levels as handlers scramble to meet burgeoning overseas demand.

China may accept U.S. Red and Golden Delicious apples again early next year if negotiations continue to go well. China stopped importing U.S. apples in 2012, citing detection of post-harvest diseases it wants to keep out of its own apples.

Washington State University researchers will study wolf and cattle behavior in an effort to minimize conflicts and follow state and federal wolf recovery plans. About 20 percent of wolf packs engage in some kind of livestock depredation every year, and the researchers want to find out why.

An extreme form of genetic engineering known as synthetic biology is being used to create novel new food products, from vanilla flavoring to coconut oil to saffron.

How to shop at PCC on a budget

Quality, organic foods may carry a higher price tag than their conventional counterparts, but there's no reason you can't be kind to your body, the environment, and your wallet!

A boost of protein

PCC offers several types of protein powders to fit a variety of diets. We also offer meal replacement powders, which in addition to protein, boast many superfoods for added nutrition. Learn about our selection to help you choose a powder that's best for you.