This article was originally published in December 2013 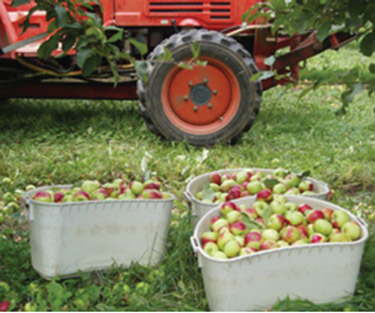 The cider industry is providing a market for blemished and undersized apples.

Cider’s roots in North America date back to 1623, the year apple trees first were planted in Boston. Those trees so famously planted by John Chapman, aka Johnny Appleseed? Cider apple varieties, every one.

John apparently preferred drinking his apple a day to eating it. Hard cider was the drink of choice for many generations, shifting toward beer only with the shift toward city living during the industrial revolution.

Nearly 400 years after those first Massachusetts trees were planted, cider has returned to the United States in an astonishing way, and this rediscovered love is creating some fascinating changes in our local agricultural system. As Sherrye Wyatt, executive director of the Northwest Cider Association, says, “The question isn’t ‘why is cider happening now?’ The question is ‘why didn’t it happen sooner?'”

First, the statistics: Across the country, the growth of cider has far outstripped beer and wine in recent years, growing 22 percent in 2010, 77 percent in 2011, 86 percent in 2012 … and there’s no end in sight. It’s also on the rise globally, in traditionally cider-drinking nations such as England and France, but also in Japan, South Africa and Argentina.

In 2004 annual U.S. production of hard cider hovered around 15 million liters; seven years later, it climbed to 35 million liters, with Vermont holding a sizeable production lead among the dozen states that generally are considered cider producers.

This massive growth has led to an interesting change in Washington agriculture: in the 1970s, our dessert apple-growing regions began ripping out their trees to plant higher value wine grapes. Now we’re seeing a small shift in that trend, although cider apples command nowhere near the same number of acres as grapes.

While some cideries make a pleasantly dry product from sweet dessert apple varieties such as Golden Delicious and Fuji, typically a traditional hard cider is based on more obscure heirlooms. Names such as Gravenstein and Bramley’s Seedling might be familiar to pie bakers, but the charmingly named old varieties that are best for cider — Brown Snout and Granniwinkle among them — have become a high-priced and hard-to-find commodity.

Growers are planting new trees, and rural cideries are steadily expanding their own orchards, in an effort to ease their supply issues. Washington State University’s Tree Fruit Research & Extension Center at Mount Vernon launched a program that offers scion wood from its 60 different cider varieties for grafting to interested cideries. Ultimately, it’s a remarkable boost for genetic diversity in our orchards.

The short-term reality is that apple trees take an average of four years to begin bearing fruit. If the hard cider industry and its orchards continue to expand at their current rates, we can expect a shortfall of cider apples for many years.

As it turns out, this chronic apple shortage is in some ways good for cider fans, inspiring the cidermakers to new heights of creativity. A few are opting to use dessert apples, using chemistry-nerd techniques to calibrate precisely the sugar level in the final product. Many are experimenting with juice from fruits other than apples, or herbal flavorings — you can find an almost bewildering array of flavors flowing throughout the year, including ginger, cherry, chamomile, hibiscus, lavender, pumpkin, rhubarb, spruce tip, cranberry and quince.

IPA fans who need to avoid gluten might want to sample a hopped cider as a replacement for their favorite beer; the floral flavor of hops comes through cleanly when layered on a bright apple base.

Meanwhile, the trees are maturing, bringing with them a fascinating potential benefit to the land itself. Numerous anecdotal reports from regional cidermakers who are growing their own fruit say the same thing: with a low presence of disease and natural pest control techniques, they’ve reduced the amounts and types of chemicals needed for tree health.

The cideries that purchase their fruit from growers point out that looks are irrelevant in their buying decisions, a notable difference between what they need for juice and what grocery stores need to display in the produce aisle. Blemished or a little undersized? Those traits are perfectly okay in the cider market, which is all about variety and flavor. The fungicides and pesticides that are sprayed on conventionally grown fruit solely to protect its appearance simply aren’t used.

At the moment, cider feels poised where craft beer was 20 years ago, or Washington wine back in the mid-1970s — a reinvented industry that is reinvigorating arboreal agriculture at a remarkable pace.

Jill Lightner is a food writer at PCC.

PCC Board of Trustees report, December 2013

Now that I-522, the state initiative to label genetically engineered foods, failed to pass, what's next? Certainly, efforts for national labeling continue, as do other state legislative and initiative efforts.

There's a spotlight is on Washington's bounty: A Christmas tree from our state is all lit up at the U.S. Capitol building this month, and our apple production climbed 16 percent in 2012. Other news: cooperatives are breaking sales records and a campaign aims to protect the ecosystems where more than half of U.S. wild seafood is caught.