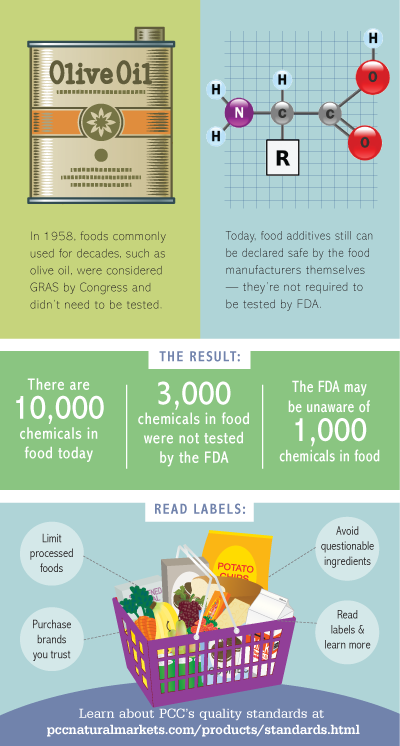 Mainstream supermarkets carry an average of more than 38,000 different items with more than 10,000 chemicals sprinkled among them. The Hostess Twinkie, for instance, is famous for having 37 ingredients, including several powder-based chemicals and vague “natural and artificial flavors.”

If the inquisitive shopper doesn’t understand what a specific ingredient is, how it is made, or what its purpose is, what assurance do we have that every ingredient on a label is safe to eat?

The Food Additives Amendment of 1958 was intended to ensure chemicals added to food were safe. Congress created an exception, however, for food ingredients that had been used commonly for decades and, at the time, did not believe they needed to be tested thoroughly. Industry was given authority to declare such ingredients (e.g. olive oil and vinegar) “generally recognized as safe” (GRAS).

Manufacturers today have moved well beyond the law’s original intent. According to the Pew Charitable Trusts’ Food Additives Project, manufacturers regularly use the GRAS process to declare the vast majority of new additives safe, rather than submitting them for U.S. Food and Drug Administration (FDA) approval. What was intended as an exception has now become the de facto rule.

That’s worrisome for consumers who expect ingredients are tested independently before being allowed on the market. It’s also troubling because there’s no systematic reassessment of chemicals. Once a chemical is deemed safe, it’s very difficult to change that status.

Tom Neltner, director of the Pew project, says, “Pesticides have to get reviewed for safety by the Environmental Protection Agency every 15 years. They just went through a massive review of over-the-counter drugs at FDA.” In contrast, he says, “it’s often very hard to change the status of a chemical.”

Food additives self-determined by food manufacturers to be GRAS now are easy to browse in a database developed privately by the Seattle-based company AIBMR Life Sciences.

It collates publicly available data on self-affirmed GRAS ingredients from public domain sources and provides the information in an open, online database it hopes businesses will help keep updated.

The Pew Charitable Trusts, working with toxicology experts from academia, is conducting a comprehensive assessment of the FDA’s regulatory oversight of chemicals added to food and is publishing a series of peer-reviewed articles and reports on key issues.

The complexity of our food supply and the oversight of its safety raise fundamental questions about what we eat. The following FAQs summarize Pew’s peer-reviewed findings about the U.S. food regulatory system.

These findings understandably may leave consumers frustrated that the U.S. food regulatory system is weak and lacking transparency. As more ingredients are introduced, the FDA must face increasing responsibilities with dwindling resources.

“These are very complicated issues, Neltner says. “The law hasn’t been revised in the last 50 years. … And [FDA] is an office that keeps getting more and more work.”

This article is based on excerpts and quotations from the Pew Charitable Trusts’ Food Additives Project and the article, Food ingredients: Many routes to safety approval, which was published in December in Food Safety News.

A puzzling disease has affected hundreds of thousands of workers in sugarcane, rice and cotton fields around the world. It has killed tens of thousands of people in the Pacific coastal regions of Central America over the past 20 years.