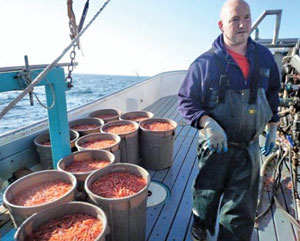 The Oregon Pink Shrimp fishery is one of only two U.S. shrimp fisheries rated ‘Best Choice’ for sustainability.

At PCC we sometimes get questions about the sustainability of this popular seafood. Wild, farmed, imported, domestic … what’s a conscientious shrimp lover to choose?

We recommend avoiding imported farmed shrimp. We don’t sell it at PCC.

Shrimp farms in countries such as China, Thailand, Vietnam, Brazil and Ecuador are the number one threat to mangrove forests. These coastal wetlands absorb more greenhouse gases that cause global warming than any other ecosystem on the planet. Mangroves also provide habitat for fish and protect coastlines from damage by storms, hurricanes and tsunamis. This loss of habitat is just one way the foreign shrimp industry depletes wild fisheries and threatens biodiversity.

Additionally, farmed shrimp are fed wild fish. An estimated average of 1.35 pounds of wild fish is needed to produce every pound of farmed shrimp — so farmed shrimp production results in a net loss of protein.

Most industrial shrimp farms are so crowded and unsanitary that producers use pesticides, antibiotics and other chemicals (many of them banned in the United States) to prevent disease. Residues end up in the flesh of the shrimp. According to a 2012 report by ABC News, traces of illegal antibiotics were found in 10 percent of imported shrimp samples. Other research found mouse and rat hair, insect parts, salmonella and E. coli.

The Food and Drug Administration inspects less than 2 percent of all imported seafood. Shrimp account for a disproportionately high percentage of refused shipments.

Shrimp from U.S. farms are produced under strict environmental laws, making them a much better choice than imported, farmed shrimp. All U.S. shrimp farms, however, are not equal.

About 80 percent of U.S. shrimp farms are in coastal waters. Pollution, disease and escapes are problems, but not as bad as in overseas operations where environmental laws are less strict. The Monterey Bay Aquarium Seafood Watch program, which rates seafood for sustainability, says most U.S. farmed shrimp are a “Good Alternative” to foreign farmed shrimp. A small percentage is ranked “Best Choice.” “Best Choice” U.S. farms have further reduced their impact on the environment by using “closed” systems away from the coast so they don’t release effluent into ocean habitats.

The feed usually includes wild fish and soybean meal, all but certain to be genetically engineered.

The U.S. Department of Agriculture does not yet have standards for certified organic farmed fish. Read our comments to the National Organic Standards Board at pccnaturalmarkets.com/r/2037.

Nearly half the shrimp Americans eat are wild-caught using bottom trawl nets, a method that on average catches four to five pounds of other marine life “bycatch” for every pound of shrimp.

Bycatch reduction devices (BRDs) are used by U.S. and European fishermen. That’s why Seafood Watch says wild shrimp from the Gulf of Mexico is a “Good Alternative” while imported wild shrimp should be avoided.

There are two “Best Choice” wild fisheries in North America: the pink shrimp fishery in Oregon and the spot prawn fishery in British Columbia. Large, tender B.C. spot prawns are a special treat, available only for a few weeks in May and June. They’re trap-caught, so they incur very little bycatch. PCC carries them depending on availability.

Pink shrimp, a.k.a. salad or cocktail shrimp, are trawled but BRDs have brought bycatch down to very low levels, and catch of endangered species, such as sea turtles, is rare in cold Northern waters. PCC carries pink shrimp year-round, in our fresh seafood section and frozen case.

PCC also carries the fresh or frozen “Good Alternative” wild shrimp from the Gulf of Mexico year-round. They’re medium-sized, about 16-20 per pound — big enough to skew on a kabob or add to a stir-fry.

Enjoy shrimp at your summer barbeques and more — just know that not all shrimp are sustainable or healthy.

A puzzling disease has affected hundreds of thousands of workers in sugarcane, rice and cotton fields around the world. It has killed tens of thousands of people in the Pacific coastal regions of Central America over the past 20 years.

In praise of pastured eggs

PCC is pleased to say we now sell pastured eggs at all our nine stores, depending on availability. They come from a variety of Washington farms where the chickens run free and feast on fresh pasture year-round.