Antibiotics for organic apples and pears? 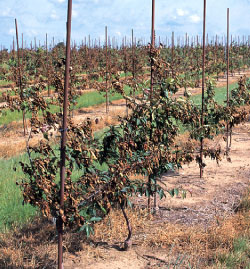 Fire blight on an apple orchard.
Photo courtesy of apsnet.org

By the time you read this, the National Organic Standards Board (NOSB) already may have voted at its April meeting on what to do about allowing antibiotic sprays for organic apples and pears under certain conditions.

I was shocked when I learned about the allowance for oxytetracycline and streptomycin at the NOSB’s 2011 meeting in Seattle. Antibiotics in organic apples and pears? Aren’t all uses prohibited?

Yes, antibiotics are prohibited absolutely in raising organic animals. If an animal gets ill, standards require the animal gets antibiotics if needed — then it’s separated from the organic supply chain.

But there is a use allowed for growing organic apples and pears: oxytetracycline and streptomycin sprays as a measure of last resort to prevent the sudden death of trees from a disease called fire blight. Unless the NOSB votes to extend the allowance, their use “sunsets” or expires in October 2014.

Are all organic apples and pears produced with antibiotic sprays?

No. PCC’s primary apple growers, Scott Leach of Zillah, Wash., and George and Apple Otte of River Valley Organics in Tonasket, do not use any antibiotics on their apples.

Leach says the available biological controls have worked for him, although they require more investment in tractors, product, labor and persistence. Leach also has not used any antibiotics on his pears. The Ottes also say they’ve never used tetracycline on their Honeycrisp, Fuji, Cameo or Gala apples, that they’ve “never seen reason to use it.” The Ottes have turned to tetracycline three times over the past five years to protect their pears, which are more susceptible to blight than apples.

On average, 7 percent of the U.S. apple crop from 1993 until 2009 (conventional and organic) was treated each year with tetracycline. Blight affects especially the root and grafting stock of newer apples and pears, such as Fuji, Gala, Granny Smith, Pink Lady, Braeburn, Bartlett, Bosc and D’Anjou. They are the most likely varieties to be sprayed. Red and Golden Delicious apples are somewhat more resistant to fire blight and much less likely to be sprayed.

Are antibiotics sprayed directly on the fruit?

Tetracycline sprays generally are used during bloom time, before fruit has formed. The amounts used are small and largely only during “high risk” years when spring weather is particularly warm and wet.

Why are these antibiotic sprays allowed at all, even as a last resort?

USDA organic standards have allowed tetracycline and streptomycin sprays as a preventive control of last resort since the start of the National Organic Program in 2002. Their use is highly regulated and reviewed by the NOSB every five years.

There are a few biological controls cited by USDA to prevent fire blight. Some farmers claim they do not work. Others say they do work, but require diligence and are more costly.

The maker of one biological control, however, hasn’t produced even close to the amount needed if all organic growers started using the product, and biologicals have a short shelf life and refrigeration is needed to extend it. Growers also need to let their farm supply reps know at least a year in advance what they will need and adjust for cost, since biologicals require investment in more tractors, sprayers, product and more labor.

Are there detectible residues on the fruit?

There are no known reports of fruit with residues greater than the tolerance level of 0.35 ppm. The Environmental Protection Agency states that typical, pharmaceutical oxytetracycline exposure to humans would be 50,000 to 200,000 times greater than the dietary exposure from apples or pears.

How does antibiotic use compare between conventional and organic food production?

What would happen if organic fruit growers could no longer use antibiotics in 2014?

If antibiotics are de-listed and disallowed before a new, consistently proven alternative is available, probably in 2017, many organic apple and pear growers say they would drop organic certification and return to conventional farming, rather than risk losing their orchards to fire blight.

One farmer we know says he wanted to be a good steward, so last year he didn’t spray when blight conditions occurred. He lost 40 percent of his trees. He says he really has lost that 40 percent of his economic engine for 10 years, because it takes that long to regrow an orchard.

What is fire blight?

Fire blight is caused by airborne bacteria, affecting organic and non-organic apple and pear orchards. Infection is most likely during periods of heat and moisture. Blight spreads rapidly and can kill an orchard in days. Dead trees look scorched.

Read PCC’s position and comments to the NOSB »

When you hear the term "raw food," do carrot sticks come to mind? Think again! Today, raw food is not just fresh produce. It also includes raw packaged foods such as crackers, nut butters and other snack foods never heated above 116° F.