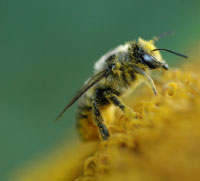 Pesticides are most suspicious. Several recent studies suggest pesticides called neonicotinoids may even be the major, or precipitating, cause — with mites and other problems the final blow.

Neonicotinoids protect plants against many insects by disrupting the central nervous system. They’re used as a spray, dust and seed treatment. The toxins are in pollen and nectar, causing bees to become disoriented and die.

Here in the United States, environmental groups are asking the Environmental Protection Agency (EPA) to ban clothianidin and other neonicotinoids pesticides. EPA wants to delay action until 2018 when it completes its own review of clothianidin, which has been used on corn since 2003.

WSU experts postulate that a combination of pesticides, building up in the hive over time, weakens adult bees and their larvae. They now recommend changing the brood combs more often, every three to five years.

Sheppard cites a recent study “that basically linked 61 different factors that affected colony health and CCD.” Among them are new viruses and diseases, genetic weakening, environmental stressors, and the Varroa mite. Mites have wiped out feral bee populations.

Choosing Russian bee queens and breeding bees that are more genetically adapted to regional weather could help. In our region, most queen bees are bred in California and are not as vigorous in our cooler climate.

Another bright spot might involve keeping bees indoors for the winter. Tests have shown a much lower colony loss and more healthy spring bees from warehousing and feeding bees indoors before they’re released into the fields in the spring.

PCC Board of Trustees report, April 2013

Notice of annual membership meeting, 2013 election, Next Board Meeting