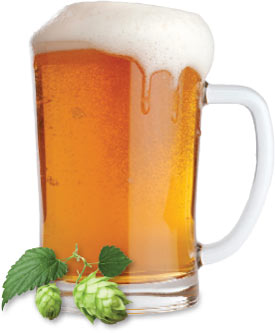 For decades Gayle Goschie sold the majority of the hops grown on her family’s Oregon farm to Anheuser-Busch, the American beer-brewing giant best known for its ubiquitous golden lager, Budweiser.

That changed in 2008 when Anheuser was bought out by InBev, a Belgian conglomerate with 200 global brands. After the merger, the company stopped buying as many Oregon hops and Goschie worried for the future of her more than 100-year-old farm.

“I’ve found it intriguing and fun to talk to brewers who are so finicky and passionate about the flavors and aromas in certain hops,” Goschie is reported to say. “In so much of agriculture, the farmer doesn’t have a relationship with the people who ultimately use the product. Now, we get to walk the fields with the brewer before harvest.”

The brewers are just as delighted. “It’s so amazing to be able to have a good relationship with your producers,” says Heather McClung, who founded Seattle’s Schooner EXACT brewery with her husband, Matt, and has visited Goschie’s farm. 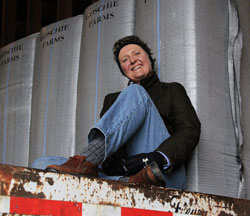 Craft brewing in the United States increased 13 percent (by volume) in 2011 over 2010, so now there are just shy of 2,000 craft brewers. It means more varieties of hops are being grown in Oregon, Washington and Idaho, the only three states where hops are grown commercially.

Hops lend aroma, flavor and bitterness to beer, so it’s not surprising that mass-produced beer relies on fewer varieties than craft brewers. Just two varieties, the Willamette and Nugget, make up two-thirds of all Oregon-grown hops. Craft brewers have long used the same hops as the Budweisers of the world, but now they want improved, new hop varieties that bring out the plant’s complexity.

When Anheuser-Busch was Goschie’s main customer, 70 percent of the farm’s hops was the Willamette variety. Today, that one variety accounts for just 20 percent of the farm’s total hops crop; it produces 10 other varieties now, including a heritage variety called Santiam that Goschie’s father grew on the farm decades ago. It didn’t store well enough for Anheuser-Busch, so the company dropped it. But Goschie is glad to be reviving it and that the flavor is attractive to craft brewers. “It’s a lovely hop, a gorgeous vine with a wonderful aroma,” she says.

This is a happy story for hop farmers, brewers and consumers alike. Hop acreage and harvests have been shrinking for years. In 2010 the country’s total hop production dropped 31 percent from the year before as a result of decreasing demand during the recession and overplanting in 2008. “We really need the craft industry right now,” Goschie says. 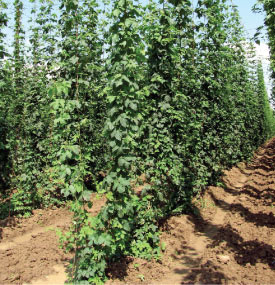 The success of craft brewers is thrilling in part because it signals a renaissance of a once-lost American art. In the early years of the United States, the country was home to a plethora of local and regional beer producers, but that changed following Prohibition.

When Prohibition was lifted in 1933, government tightly regulated the market and small producers were shut out. A handful of behemoths came to dominate and the variety of brews fell to a trickle. So powerful was the big brewery takeover that, by the 1960s, Anchor Brewing in San Francisco was the only craft brewery left in the country.

The rebirth of American craft brewing didn’t really take off until 1979, when President Carter deregulated the home brew market, making it legal to sell malt, hops and yeast to home brewers. Food industry critic Tom Philpott says this was significant because the U.S. craft-beer industry was started largely by passionate home brewers who went pro.

Now that craft brewing makes up more than 5 percent of the market, there’s a chance for brewers to have a say in the variety and quality of the hops grown in the Northwest. Researchers at Oregon State University are testing hundreds of new hybrids and reviving heritage varieties.

Regarding the emergence of new aroma hops, Oregon State University (OSU) fermentation professor Thomas Shellhammer told Willamette Week, “I think you’ll find that brewers will use them like cooks use spices — as a blend.”

The big guys still control most of the market, of course. The American beer junta — comprised of Anheuser-Busch, SABMiller (Coors) and Crown Imports (Corona) — produces 85 percent of the volume of beer consumed in the United States every year. Fifty-one percent of the wine sold in the United States also is produced by three companies. Together, these two industries spend more on lobbying politicians than either the National Rifle Association or the tobacco lobby.

Consumers may not have noticed this as much as they’ve noticed consolidation in the food industry. That’s because consolidation in the beverage industry hasn’t wrought the environmental destruction we’ve seen from agglomerations of farms and ranches (although the Adolph Coors Company was big enough, along with 30 or so co-defendants, in 1993 to merit its own Superfund site in Golden, Colo.). By and large, the problems with big brewers are more insidious, just blander (literally).

For the past decade, Howard has been analyzing consolidation trends in the beer and wine (and food) industries. He says manufacturers have become adept at hiding the illusion of consumer choice behind a torrent of brand names, while flooding the market with slight variations of the same pale product in colorful bottles. As people drink less Bud and Miller, their makers have responded by buying up smaller, regional brands with hopes of keeping customers.

About 50 percent of U.S. beer sales, Howard notes, are from canned clones of Anheuser-Busch.

Winemakers also hide behind the allusion of “locally made,” says Howard. He currently is studying ownership data for 4,000 labels of wines on the shelves of 19 Michigan stores (not including Whole Foods and Trader Joe’s, which he says kicked him out). Previously published data, he notes, argue that 10 firms control about 72 percent of the wines in U.S. grocery stores.

In the brewing industry, being big can mean controlling access to ingredients, which means muscling the little guys out of the industry, says Paul Gatza, executive director of the Brewers Association, headquartered in Boulder, Colo. “Access made a big difference in the hop shortage five years ago, when the buying power of Anheuser-Busch allowed Craft Brew Alliance partners to get the hops they needed at a better price than craft brewers they compete in the market with.”

Yet even as big brewers have held on to their market domination, the explosion of excellent, small-scale, local and regional brewers is growing as a powerful force and the United States, home of Bud Light and Coors Extra Gold, has emerged as the hotbed for beer innovation and quality. 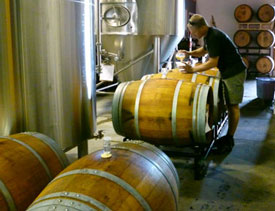 The hop shortage even may have been an impetus for brewers’ creativity. It encouraged some craft brewers to begin growing their own hops. Sierra Nevada planted 40 acres around its California brewery, and Rogue Ales in Independence, Ore., is growing seven varieties, meeting about a third of its needs.

There’s been an added benefit, in addition to hop security.

“Now our hops clearly have their own flavor because they have their own land,” said Rogue’s president, Brett Joyce, to the Willamette Week. “They taste like nothing else anywhere … we call it ‘dirt-oir,'” the hop-equivalent of terroir.

Smaller craft brewers aren’t left out of the dirt-oir movement just because they can’t grow their own hops. The Portland-based company, Indie Hops, connects Oregon hop farmers with craft brewers by selling Oregon-grown flavor hops to more than 200 craft brewers across the country, including Seattle’s Pike Brewing Company and Schooner EXACT.

Solberg hopes to bring a new variety to market every year. Future varieties could taste of coconut, blueberry, mango, garlic and sage, and the breeds that emerge as the cream of the crop will be planted in small acreage on Oregon farms, including Goschie’s.

Pike Brewing’s head brewer, Dean Mochizuki, is one happy beneficiary of Indie Hops’ vision. For him, it’s about more than novelty flavor profiles. He has been buying from Indie Hops for more than a year because the hops he gets are certified Salmon-Safe. “A lot of farmers in the Northwest are moving toward organic now, too, because of the demand,” he says. 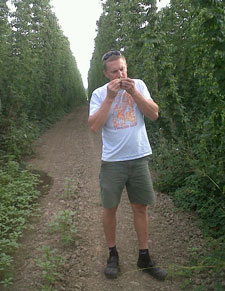 As the craft brew movement continues to flourish, organic hopefully will play a bigger part. A small portion of Goschie’s acreage is certified organic and she hopes to add more.

Gary Fish, the owner and founder of Deschutes Brewery in Bend, Ore., posted an answer to an FAQ on the Deschutes website: “Deschutes is privately and independently owned and operated. We are not owned by, or selling to, any large brewer or other entity, nor do we have any plans to. We’re having too much fun to change.”

Joel Preston Smith is a writer and photographer living in Portland. Eli Penberthy is co-editor of the Sound Consumer.

Is irrigation sustainable for Washington farmers?

Limited water supplies and who controls them have defined the history of the American West for centuries. Conflicts over water are certain to increase with global warming and a growing population.

Join Jubilee Farm in Carnation, Wash., for a celebration of the new partnership with the PCC Farmland Trust and King County on Sat., Sept. 15. Also, details on the overturn of a development plan that would have opened development to 182 acres of prime farmland near Sumner.