Washington shellfish initiative: Is it sustainable?

by Cameron Woodworth and Eli Penberthy

This article was originally published in April 2012 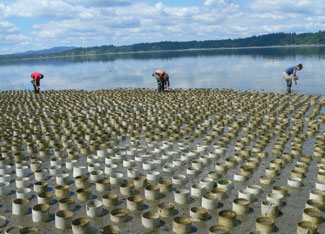 Some experts estimate there are 3,000 miles — 12 million pounds — of PVC tubes around Puget Sound for geoduck production.
Photo by: Protect our Shoreline

When Governor Chris Gregoire announced a $4.5 million state-federal initiative to boost shellfish production in Puget Sound and clean up the environment last December, it was met with both praise and criticism.

A handful of private interests that stand to profit are thrilled. But some environmental and coastal community advocates are fighting mad, saying benefits are exaggerated and the costs externalized to the public. Gregoire’s plan sharpens this debate.

The initiative is backed by the National Oceanic and Atmospheric Administration and calls for increasing shellfish aquaculture in Washington. It “streamlines” the permitting process, making it easier for shellfish operations to expand into public waters and tidelands.

“Shellfish always have been an essential part of who we are as Washingtonians,” Gregoire said in announcing the initiative. “Our shellfish industry helps sustain our families and communities.”

The plan also creates a panel of scientists, government agencies, tribes and shellfish growers to work on recommendations to address increasing ocean acidity.

“The shellfish initiative is good news for Puget Sound and for shellfish growers who provide us with healthy and delicious local seafood,” says Karen Anderson, state director for The Nature Conservancy. “It’s a big step toward improving water quality for both people and nature.”

Bill Taylor, president of Shelton-based Taylor Shellfish, praises the plan in an opinion piece in The Olympian. “The single greatest hindrance to increasing shellfish production and adding jobs,” he says, “is the current inefficient, costly and unpredictable process to permit new farms.”

Neither the governor’s office nor other proponents have projected how many jobs or how much revenue the initiative may generate. Laura Hendricks, chair of Washington state’s Sierra Club Marine Ecosystem Campaign, is skeptical.

“Since the shellfish industry pays little tax,” she says, “boosting revenues to the state is unlikely. Increasing exports would be nice for the Governor but wouldn’t pay for all the government time the shellfish industry uses — or the natural resources.”
The industry is hardly the job-creator it’s being billed as, Hendricks claims. She points to Taylor as an example. The company says it roughly doubled profits since the 1990s, to about $36 million, while the number of employees increased from 270 to 370.

Hendricks mainly is critical of the environmental impacts. “What’s wrong is framing commercial aquaculture with other things that sound good. They’re not really being honest that this is a money-maker deal,” she says. “This is not about restoration or cleaning the water.”

If it was about restoration, Hendricks claims, the plan would restore more than just “a couple of acres” of Olympia oysters. Commercial aquaculture operations in Washington raise some native geoducks but mostly non-native Pacific oysters, Manila clams and mussels.

Environmentalists such as Hendricks also criticize large shellfish growers for spraying the toxic pesticide carbaryl in Willapa Bay and Grays Harbor for years. Carbaryl is being phased out, so growers intend to use imidacloprid as a substitute. (Imidacloprid is in the class of chemicals known as neonicotinoids and is a neurotoxin linked to Colony Collapse Disorder among bees. It’s banned in Germany, Italy, France and Slovenia (see Honeybee disaster, April 2012 Sound Consumer).

“Converting tidelands into the marine equivalent of factory farms is not benign,” says Anne Mosness, a former commercial fisher and head of the Go Wild campaign. “Beaches bulldozed of marine vegetation eliminates habitat essential for spawning small fish. The loss of these small fish deprives sea life, birds and coastal animals of essential food. Populations of salmon, Orca and other species continue to decline as the shellfish industry expands,” she says. “We cannot afford this kind of unsustainable growth.”

Mosness says many businesses are affected by lost biodiversity and healthy ecosystems, including commercial, recreational and tribal fisheries, and tourist activities such as bird-watching and other shoreside recreation. Yet, to be clear, Mosness, Hendricks, and other environmentalists do not believe all shellfish aquaculture is bad.

“We support sustainable aquaculture that does not use chemicals or massive amounts of plastics, and does not eradicate the surrounding aquatic life,” Hendricks says. “We’re opposed to specific types of industrial aquaculture that smother our coastlines — intertidal geoduck farms, oysters grown in high-density plastic grow-bags, and large-scale mussel rafts.”

The plastic Hendricks refers to is one of the biggest complaints about the environmental impact of industrial aquaculture. It’s not just the plastic grow-bags used in Pacific oyster production but also plastic nets, bands and tubes on geoduck farms.

According to the Case Inlet Shoreline Association (CISA), the geoduck industry embeds approximately eight miles of PVC plastic pipe per acre in pristine intertidal habitat areas of Puget Sound. CISA estimates that as of June 2010, there were 364 acres of geoduck farms in the Sound, and if they all used PVC plastic, there could be a grid of 3,000 miles (12 million pounds) of PVC tubes.

“Not all shellfish aquaculture is bad. Sustainable aquaculture does not use chemicals or massive amounts of plastics, and does not eradicate the surrounding aquatic life.”

“Such plastic poses one of the grave threats to the health of Puget Sound,” says oceanographer Dr. Curtis Ebbesmeyer, Ph.D., in a CISA report. “The particulate plastic from PVC tubes enters the food web and does untold harm to all creatures … including us.”

Captain Charles Moore, credited as the first to pursue scientific research on the Pacific Garbage Patch and author of “Plastic Ocean,” recently warned the Washington State Department of Ecology to restrict plastics used by the shellfish industry in Puget Sound due to their serious impacts on aquatic life.

One argument for increased shellfish production is that shellfish clean the water where they’re raised, because they’re “filter-feeders.” But opponents of shellfish expansion say the science is not so clear.

“There is no scientific evidence that geoduck or mussel farming is good for the water and the marine environment in Puget Sound,” says CISA vice president Curt Puddicombe. “The opposite is true. We know geoduck aquaculture results in plastic pollution.”

The mussels sold at PCC from Penn Cove Shellfish of Coupeville, Wash., are one example of how shellfish can be farmed sustainably.

They’re raised in an area not known to be sensitive habitat.

PCC’s clams and oysters from Snow Creek are grown in the pristine waters of Discovery Bay without toxic pesticides.

Harvesting geoducks also requires high-volume hoses to unearth the clams from the sand. Critics call this “turning the beach upside down” and say it’s another way the habitat of creatures such as the sand lance (food for juvenile Chinook and Coho salmon and other marine animals and fish) is disturbed.

There’s also the question of whether tightly stocked geoduck farms disrupt the ecosystem in other ways, such as sucking too much oxygen from the water, potentially harming other species.

Peer-reviewed studies on the ecological impacts of geoduck farming are scarce. In 2007, Washington’s legislature directed Washington Sea Grant at the University of Washington to conduct a six-year study to assess possible effects of geoduck aquaculture on Puget Sound and the Strait of Juan de Fuca. Preliminary results indicate the harvesting effects are minimal to small animals that live in the sand — such as small crustaceans, worms and tiny clams — but researchers note the limited scope of their findings. The research did not include multiple planting and harvest cycles over time and focused on only three locations. It also looked only at the effects of harvesting — not the effects of the tubes and nets, which Puddicombe says are bigger worries.

“The shellfish industry likes to claim the tubes and nets produce a three-dimensional habitat that attracts fish like an artificial reef, but science shows artificial reefs generally don’t work, and we don’t have these kinds of reefs in Puget Sound anyway,” Puddicombe says. He says the UW research shows flat fish and other sandy-bottom species do not use areas where tubes have been planted. He also cites California Fish and Wildlife research showing shellfish aquaculture reduces birds, and contends shorebird populations have dropped 70 percent over the past 20 years.

All this is happening amidst pressure to allow industrially farmed fish to be certified organic.

PCC’s view is that it’s important for seafood bearing the organic label to be produced in ways that are compatible with organic principles — adhering to practices that “restore, maintain and enhance ecological harmony … and balance natural systems.” Numerous groups are concerned that shellfish produced in plastic orchards with PVC tubes and nets cannot meet these standards.

“Another big issue with certifying mollusks as organic is the water quality where they are raised,” says Patty Lovera of the consumer group Food & Water Watch. If mollusks are certified organic, she says there should be strong requirements for where the mollusks are grown, water quality testing should be mandatory, and closed-system (land-based) production should be encouraged so tidelands, such as those of Puget Sound, aren’t exploited.

Geoduck farming, given the reported environmental destruction, should not be eligible for organic certification; nor should shellfish grown in Willapa Bay and Grays Harbor, where toxic pesticides are applied.

The stakes are high for developing defensible organic aquaculture standards. Half of all seafood in the United States is farmed and the demand for trustworthy, organic food is growing. Done right, organic aquaculture could be another way Washington distinguishes itself in the food marketplace.

Join us on Saturday, May 12 for an educational tour of two Walla Walla farms and meet three farmers who have decided to modify their business practices and make a commitment to farming their land sustainably.