This article was originally published in April 2012 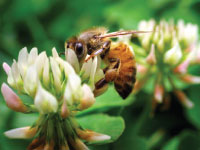 A Purdue University study indicates pesticides are one cause of Colony Collapse Disorder among honeybees. Some say the study suggests pesticides called neonicotinoids may even be the major or precipitating cause — with mites and other problems the final blow.

Neonicotinoids protect plants against many insects by disrupting the central nervous system. They’re used as a spray, dust and seed treatment and act systemically — taking the pesticide up through roots as a plant grows. The toxins are in pollen and nectar, causing bees to become disoriented and die.

A peer-reviewed study by Purdue scientists found that dead bees in and around hives showed the presence of the neonicotinoids, clothianidin and thiamethoxam. These insecticides also were found in soil two years after treated seeds were planted and on dandelions and corn pollen gathered by bees.

The Environmental Protection Agency (EPA) reportedly knew clothianidin was toxic to bees before the pesticide’s release in 2003, but the manufacturer, Bayer, won approval after furnishing a study since criticized as flawed. Bee populations started dropping in 2005.

Honeybee populations are so devastated some beekeepers qualify for disaster relief. Beekeepers want EPA to withdraw approval of the insecticides.

"How can a nation be great if its bread tastes like Kleenex?" wondered the famous chef Julia Child. We couldn't agree more and, judging from our bread aisle, we've got nothing to worry about in our little corner of the country. Read about PCC staff favorites — all organic — from hearty whole-grain to classic sourdough.

Washington shellfish initiative: Is it sustainable?

When Governor Chris Gregoire announced a $4.5 million state-federal initiative to boost shellfish production in Puget Sound and clean up the environment last December, it was met with both praise and criticism.

Students at The Evergreen State College and Seattle University are making sustainable, local food a priority.