Pump up the pumpkin

Joke: Why did the pumpkin cross the road?
It would rather be squash than smashed! 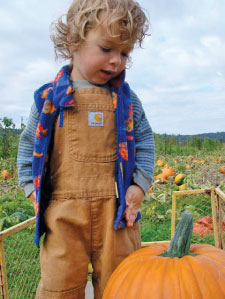 Little man, big pumpkin: Japhy on a wagon ride with his perfect pumpkin.

U-Pick pumpkins in the Snoqualmie Valley

These U-Pick pumpkin patches are about a 25-mile drive from Seattle:

Ooooooff. Bad jokes aside, ’tis pumpkin time! The frost is not yet on the pumpkin, but the spotlight sure is. Leaves are turning lovely shades of gold and orange, and so are the supermarket parking lots, where tons of round, rosy pumpkins wait to be picked by their own personal sculptors.

The pumpkin is one of the biggest annual farm crops, with 1.5 billion produced each year in the United States. But alas, this abundance is not destined for dinner plates but rather for decoration — making this farmer and pumpkin-eater cringe!

Pumpkins have a 6-month life cycle, from the April greenhouse to field to market, and come to you, orange and plump like the fatted calf, by October. What a travesty that these many nutritious, delicious orbs then go under the scalpel, not in the stew pot.

There’s truth to that silly joke: pumpkins are squash, and can be eaten just like their winter squash cousins.

Pumpkins are a true American vegetable, native to our continent and its people. It was the first of the famous Three Sisters (corn, beans and squash) to be “domesticated” approximately 9,000 years ago. To early American pioneers, the pumpkin was a perfect storage crop for the long winters. Pumpkins belong to the same family (Cucurbitacae) as gourds, melons and cucumbers.

Pumpkins continue to be popular food in many cultures. They’ve long been a staple for Mexican culture, with the seeds factoring in more importantly than the pulp.

Pumpkin pulp is high in beta carotene, a powerful cancer-fighting antioxidant. Pumpkin seeds are a whopping 35 percent protein and also are high in unsaturated fatty acids, presumably accounting for the Aztec and Maya appreciation of their food value.

The Mayan dish papadzules, made with pumpkin seeds and meaning “food for noblemen,” is still a favorite in Yucatecan restaurants.

The Japanese prize pumpkins as a macrobiotic food, specifically the Hokkaido pumpkin (what we know as Red Kuri squash in the United States). Recently, many Japanese diet programs have recommended pumpkin to combat radioactive damage. Pumpkins also appear prominently in Thai, Indian and African cuisine in curries and soups.

Listen and learn about pumpkin seeds

Pick up an organic Jack-o’-lantern or Sugar Pie pumpkin from Rent’s Due Ranch at PCC, or pick your own at a farm in the Snoqualmie Valley (see sidebar). Here are two great ideas for using them in your cuisine this fall:

Toasted pumpkin seeds are a healthy snack filled with zinc, magnesium, manganese, iron, copper and protein. They’re great alone or in salads, muffins, bread, and in other recipes as a nut substitute.

To prepare: Remove seeds, rinse them in water to get rid of the stringy innards, and pat them dry on a towel. Flavor with coarse salt for a traditional taste, or try these fun twists: pumpkin pie spice, Cajun seasonings, garlic salt, curry powder, or sugar and cinnamon. Once seasoned, bake the seeds on a lightly oiled cookie sheet at 250° F for about an hour, stirring every 20 minutes.

You can have your Jack-o’-lantern and eat it, too! Harvest the pulp from your pumpkin in this manner: while hollowing it out, scrape a little deeper into the side walls to extract the “meat.” Using a large spoon or other sharp-edged instrument, scoop the pulp from inside the pumpkin, leaving an inch-thick wall to carve as usual.

Once you’ve extracted the pulp, steam it over a pot of water until it’s tender (about 30 minutes or more). Run it through a food processor to puree, or mash by hand. Use right away or freeze in air-tight containers to use later in pies, breads, soups, or curries.

Sarah Cassidy is a farmer and education director at Oxbow Organic Farm and Education Center.

What does "Natural" mean?

What do you think natural means? Do you think it means no pesticides? No GMOs? Letters to the Sound Consumer show many PCC shoppers are confused and research confirms consumers nationwide are confused.

If bright white is the only sugar you’ve used for baking or sweetening your tea, you’re in for a treat. We have a range of sugars at PCC, from the sultry, caramel-like Muscovado, to the earthy, unrefined Sucanat, to glistening Turbinado.