What does "Natural" mean? 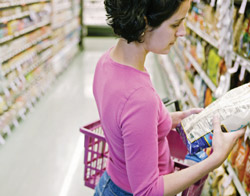 At PCC, buyers look beyond labels to specific ingredients and the method of production.

PCC maintains a list of ingredients acceptable and unacceptable (see Minor ingredients and processing agents), which it uses as a guideline for approving new products and for reviewing current products that may have been reformulated without notice from the manufacturer.

The list is modified from time to time. More than 250 ingredients are on the list, which you can browse here.

What do you think natural means? Do you think it means no pesticides? No GMOs? Letters to the Sound Consumer show many PCC shoppers are confused.

Even more alarming are two consumer polls by San Francisco research firm, Context Marketing, released in 2009 and 2010. They show the national trend that more consumers value the term “natural” than “organic.” While 50 percent of polled consumers said the “natural” label on food was either important or very important to them, only 35 percent believed “organic” carried the same value.

The word “natural” is not defined or regulated by the government or any other agency, except for processed meat (see sidebar, right). Consequently, “natural” labels on food are facing a growing number of legal challenges.

Two class-action lawsuits are challenging use of the term “natural” on products made from GMOs. Plaintiffs say ConAgra Foods is deceiving the public by labeling its Wesson cooking oil “pure” and “100 percent natural,” when it’s made from GMO corn. The suit notes even Monsanto doesn’t consider GMOs “natural”; Monsanto defines GMOs as “plants or animals that have had their genetic makeup altered to exhibit traits that are not naturally theirs …”

The Center for Science in the Public interest (CSPI) has complained that factory-farm chicken producers who label their chickens “all-natural,” such as Tyson, inflate the true weight of meat by plumping it with salt water, broth, phosphates and carrageenan. Tyson settled out of court in 2009, paying $2.3 million. (The case didn’t even mention Tyson’s routine use of antibiotics.)

In 2007 Cadbury Schweppes and Kraft faced lawsuits after making “natural” label claims on 7UP and Capri Sun, which included high fructose corn syrup (HFCS). Both companies changed the labeling of their products before further legal action.

Last year, three New Jersey residents sued Breyer’s for falsely claiming that its ice cream is “all natural,” when it contains a chemically altered cocoa powder. The plaintiffs claimed “natural” is understood by consumers to describe a product that does not have any chemically altered or man-made substances.

A year ago, Ben & Jerry’s announced it would begin phasing out use of “all-natural” on ice creams containing alkalized cocoa, partially hydrogenated oil or corn syrup.

Lawsuits involving more common “natural” products should come as no surprise. This spring, leading organic stakeholders identified “natural” food labels as one of the greatest threats to organic.

Natural is not organic

There was a time when “natural” was understood to mean essentially what organic means today. Co-ops sold “natural” organically grown foods in the 1970s and 1980s when organic systems were emerging and not uniformly defined.

Even in 1999, when PCC added “natural” to its business name, “natural foods” still was a common reference for what we sold. When U.S. Department of Agriculture (USDA) organic standards were implemented a few years later, confusion between organic and “natural” escalated.

Today, two-thirds of Americans believe foods now are less safe to eat because of chemicals used during growing and processing of foods, according to research by the Natural Marketing Institute. This widespread interest in avoiding chemicals in food makes it important for shoppers to realize that buying “natural” foods typically means nothing for avoiding synthetic inputs and toxins used on farms and inside manufacturing plants.

Unlike organic, which is the only such label with the statutory weight of law, the term “natural” mostly is meaningless marketing. No government agency, certification group, or other independent authority defines the term “natural” on packaging or ensures the claim is truthful.

Luke Lukoskie, founder of Island Springs Organics, has provided PCC with organic tofu for nearly 40 years and says he’ll never switch from organic to nonorganic soybeans. “It’s simple,” he says, “‘natural’ does not guarantee the soybeans were grown with respect to the environment but organic does.”

USDA has found residues of organophosphate pesticides, such as chlorpyrifos and malathion, on corn, soy, wheat flour and oats — all common ingredients in breakfast cereals. These pesticides are prohibited in organic food production, as are thousands of other synthetic substances.

Yet pesticide use in nonorganic “naturals” is not limited to the farm fields. Harvested corn, oats and wheat routinely are sprayed in storage.

A report released by The Cornucopia Institute a few weeks ago compared organic cereals and granolas with cereals labeled “natural.” (See cornucopia.org/cereal-scorecard/docs/Cornucopia_Cereal_Report.pdf) It documents how some cereal companies have switched from organic to conventional ingredients without changing their packaging, marketing or pricing.

“We give no credence to the word ‘natural’ on product labels,” says Russ Ruby, PCC’s director of merchandising. “We look beyond labels to scrutinize ingredients and the method of production to decide whether we accept or reject products. There are a lot of ‘natural’ products that we don’t carry, and never would carry.”

“The ingredients alone tell you those products aren’t truly natural,” Ruby says, “to say nothing about how the animals were raised. It’s preposterous Tyson can call its chicken ‘natural’ when the inhumane treatment of its birds has been so publicized.”

“It’s critically important that all our meat at PCC is raised humanely,” says Ruby. All PCC meats also come from animals raised without antibiotics or growth-promoting hormones. Still, the only guarantee livestock are not fed genetically engineered grains grown with pesticides is to buy certified organic meat. PCC sells certified organic chicken and certified organic beef now; our pork provider is in the process of organic certification, and already Non-GMO Project Verified.

“Organic is the gold standard in every department in our stores,” Ruby says. “If a product is certified organic, we’re confident in how the ingredients were grown and the food produced, so we give priority and preference to organic and we encourage vendors to source certified organic ingredients.”

PCC merchandiser Elin Smith says when vendors present a new ice cream, for instance, it has a much better chance of being approved for sale if it’s organic. “If it’s not organic, we’re asking other questions,” she says. “Where is the milk and cream from? What kind of sugar?

And of course, we don’t allow dairy produced with artificial growth hormones.” PCC also doesn’t consider high fructose corn syrup — used in many popular brands of ice cream — to be natural. We banned HFCS from all products in 2007.

The creamy Guernsey yogurt from Grace Harbor Farms in Custer, Wash. is an example of a nonorganic food that’s approved at PCC. Grace Harbor owner Tim Lukins says the yogurt truly is naturally produced because “it’s just pure milk and culture — we don’t thicken it, we don’t add any mouth-feel products like guar gum or xanthan gum.”

That the yogurt is produced locally (“any customer can come visit the farm and see how our animals are raised”) is another reason customers can trust it’s naturally produced, he says.

“The bottom line is that we’re always inquiring about the source of ingredients, from the products on our shelves to the foods we make in our delis,” says Ruby. “In a perfect world every ingredient is organic. It’s an evolution but it’s an important goal.”

Beyond PCC, despite widespread consumer confusion about the meaning of the “natural” label, OTA’s Bushway says there are clear signs indicating many consumers nationwide do understand the value of the organic label.

At a recent White House briefing, she told the Council of Economic Advisors “something that just about made them fall off their chairs” — that the organic industry is growing at 8 percent and creating jobs at four times the national average. “Many shoppers do realize what organic ensures and realize they’re getting added benefit in buying organic,” she says.

This article was compiled by the editors from a variety of sources.

October marks the second annual Non-GMO Month, and we’ve got a lot to celebrate! We know many PCC members and shoppers are passionate about avoiding genetically modified organisms (GMOs) in food.