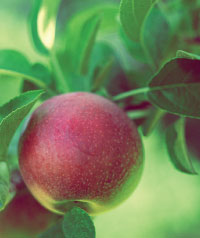 The Washington apple industry is forecasting the third-largest crop in history at 106.3 million 40-pound boxes. That’s down 2.7 percent from last year’s record 109.2 million boxes. Washington produces about 65 percent of the nation’s fresh apples and about 50 percent of its processing apples used for sauce, juice and baking.

A survey of Washington tree fruit shows an increase in apple, sweet and tart cherry and apricot trees, but a decrease in pear, peaches and nectarines. Total tree fruit acreage is down 2.9 percent from 2006, but total number of trees is up 22.2 percent. The report shows that less than 9 percent of apple trees are organic.

The Northwest pear harvest is projected to have a banner year.

Washington Governor Chris Gregoire has asked USDA to determine whether the entire state qualifies as an agricultural disaster zone due to this year’s cold, wet weather that caused many crops to fail or develop late.

There will be tight supplies of lemons for the next few months. The freeze last winter in the California desert cut the crop there by up to 40 percent.

Oregon’s hazelnut crop in 2011 is projected to be the fourth-largest crop on record.

The abundance of yellowfin tuna is estimated at a medium level, according to the Blue Ocean Institute. Evidence indicates Pacific Yellowfin can’t sustain more fishing pressure than the current rate. Three yellowfin tuna fisheries currently are undergoing assessment for Marine Stewardship Council certification on the Florida coast, the Maldives, and Mexico/Baja, California.

Alaska’s salmon catch for 2011 was far afield from early expectations of 203 million fish. Pinks, chums and Sockeyes all were under forecast. The actual harvest is estimated at 160 to 165 million fish.

If bright white is the only sugar you’ve used for baking or sweetening your tea, you’re in for a treat. We have a range of sugars at PCC, from the sultry, caramel-like Muscovado, to the earthy, unrefined Sucanat, to glistening Turbinado.

Pump up the pumpkin

The pumpkin is one of the biggest annual farm crops, with 1.5 billion produced each year in the United States. But alas, this abundance is not destined for dinner plates but rather for decoration — making this farmer and pumpkin-eater cringe!

October marks the second annual Non-GMO Month, and we’ve got a lot to celebrate! We know many PCC members and shoppers are passionate about avoiding genetically modified organisms (GMOs) in food.