The shopper’s guide to pesticides

This article was originally published in July 2011 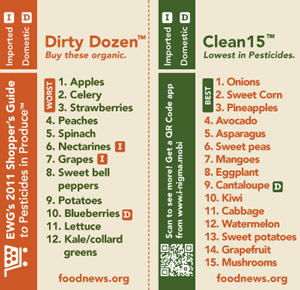 Each year, the Environmental Working Group (EWG) has analyzed USDA data to produce its popular “Shopper’s Guide to Pesticides.”

If you want to continue knowing what fruits and veggies are high in pesticide residues, sign a petition to USDA on the Environment Working Group website.

The petition asks USDA to release the latest data on pesticide residues in produce.

The report was supposed to be released in January but has been held up, apparently under industry pressure.

Chemical farming interests are trying to restrict the public’s access to information about pesticides in fruits and vegetables.

They’re funding a campaign to deny shoppers a popular guide to pesticide residues in produce. You may be familiar with the guide’s list of fruits and vegetables known as the “Dirty Dozen,” those with the most pesticide residues as well as the “Clean 15.”

The U.S. Department of Agriculture (USDA) has tested fresh produce for pesticide residues and released its findings for the past 20 years. Since 1991, USDA has tested 10,000 to 18,000 samples of 12 to 20 foods for residues of hundreds of common agricultural chemicals. The foods tested are chosen from those most important in the diets of infants and children.

Until recently, USDA issued reports every year for corn, soy, cotton and wheat, and periodically for other crops, such as oats and sorghum. In odd years, USDA surveyed pesticide use on fruit and, in even years, on vegetables.

Despite some shortcomings, the pesticide database has been the only free and publicly available resource for anyone studying, monitoring, measuring and attempting to manage pesticide use and risks. The Environmental Working Group (EWG) has used the USDA data, analyzing it to produce the Shopper’s Guide to Pesticides.

But this year, industry is lobbying USDA to give consumers less information. In April, 18 trade groups representing chemical farmers reportedly pressured USDA to revise its release of pesticide data, targeting education efforts such as the “Shopper’s Guide to Pesticides” in produce.

It wasn’t the first time. Last fall, officials of another trade group reportedly asked federal officials to “look into” how the administration “packages the release of annual pesticide data.”

EWG has filed a Freedom of Information request for documents expected to show how USDA has been pressured to change its reporting. The documents also will show whether a $180,000 grant in taxpayer money to a pro-pesticide group was awarded improperly to support industry lobbying. EWG is asking USDA to investigate who approved that grant.

With increased pesticide levels in GE foods, and more GE crops approved, PCC believes that it’s more critical than ever to have access to the information needed to make the healthiest, safest food choices.

We believe USDA should collect and analyze much more information about pesticide use. If you agree, sign a petition at http://tinyurl.com/62gu23b.

Visit the archives of PCC Advocates, our email newsletter that keeps you informed about current food and agriculture controversies.

PCC Farmland Trust is saving another farm. But this latest project is different than some of our past work. This is a tale of continuity, on a larger scale, and with timely regional and political relevance.

PCC Board of Trustees report, July 2011

Welcome the new board of trustees, PCC election results; Hofford retires from board; Board meeting report