This article was originally published in August 2009 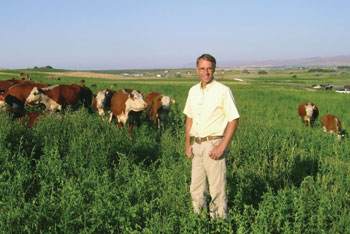 (August 2009) — Everything in life is driven by energy. Our machines — planes, boats, trains, cars, farm and construction equipment — all run on oil. We are driven, too, running on carbohydrates (sugars), fats and protein. Yet all oil and all the food that sustains us can be traced back to free energy from the sun.

A cow can harvest a limitless supply of free energy — if we will let her and manage a system where she can. As a farmer, it’s my job to collect, process and sell this energy wonderfully disguised as meat!

It’s hard to compete against free energy and we can and should recreate a system that reduces unnatural energy inputs, including petroleum-based feed crops. We need to replace high-maintenance feeding with grazing, and replace energy stored in a grain of corn with energy stored in a blade of grass.

The law of thermodynamics says that matter cannot be created or destroyed. It only can change forms. Livestock and meat products are part of a very efficient system of energy transfer and use — if allowed to happen within the laws of nature. The problem is that most meat comes to us through woefully disordered and inefficient systems.

For more on the carbon footprint of grass-fed cows, see the report, Beefing up the Palouse.

Virtually all poultry, pigs and cattle in this country are fed corn — most of it genetically modified. While the corn plant naturally is very efficient at converting light through photosynthesis into carbohydrates, the corn industry today is dependent on oil — including the fertilizers and pesticides derived from oil. Cattle do not efficiently convert corn into meat. They’re ruminants with four stomachs designed for digesting grass.

Unnatural and unhealthy alliances were entered into in the mid-20th century. Cattle came to be fattened and finished in less space by placing them in feedlots rather than on pasture. Cattle also were bred to favor masculine traits of performance — bigger frames and higher gains — favoring industrial feedlots even more, while ignoring feminine traits of docility, mothering ability, and more tender meat.

Quantity became emphasized over quality. Even the standard for “USDA Choice” was lowered and toughness increased through use of artificial growth promotants by an industry that rewarded pounds of beef per head fed rather than standards natural to the species.

Unhealthy grain-based fats also replaced healthy grass-based fats. Grain-fed beef is different: it’s greasier and pastier, and tends to stick to the roof of your mouth — and your arteries! The fat in grass-fed meats has a lower melting point, and ample research has found that grass-fed animals produce much more conjugated linoleic acid, which provides cancer-fighting benefits, builds muscle, and prevents weight gain.

Echoing the farmer/philosopher Wendell Berry, Michael Pollan writes, “… when we took animals off farms and put them onto feedlots, we had, in effect, taken an old solution — the one where crops feed animals and animals’ waste feeds crops — and neatly divided it into two new problems: a fertility problem on the farm and a pollution problem on the feedlot.”

The last 70 years have been fueled by unsustainable petroleum (and huge subsidies for grains) in a system where we now bring the feed to the cows and not the cows to the feed. Ironically, what was meant to make food production more efficient has done the opposite.
It would be common sense to abandon feedlots and return to pasturing but that’s easier said than done. There are fewer pastures, fewer graziers (herders) — and there’s an issue of genetics.

There’s a lot of air between the bellies of industry-bred cattle and the ground, and it’s worthless. Better to shorten ’em up so they’re grass-friendly and reduce the amount of low-value chuck and round. Give ’em a broader and longer back for more steaks. These traits have been bred out of most cattle today. Cattle that “finish” on grass are easy-keeping animals, earning a living for themselves instead of us feeding them.

It turns out that what works in the pasture also works for ranchers and consumers. Fat is pure energy and marbling means flavor and health. Sunshine harvested through cows eating grass is best stored as fat on the back and NOT in the (hay) stack!

Natural, range-grazed, and no added hormones or antibiotics does not mean the meat was “grass-fed” or even fed an “all-natural” diet. So on farms like mine, Thundering Hooves, we do better than “natural.”

Cattle as part of a holistic system can harvest crop aftermaths such as straw or unharvested vegetables. They can harvest forage on land too dry or steep for farming. The key is good management. Four-fifths of what goes in the front end of a cow goes out the back, enriching the soil for the next cycle of crops.

Here’s the magic: The waste of one is the food of the other. What an efficient use of energy! This never happens when cattle are confined to a Concentrated Animal Feeding Operation (CAFO) and organic matter is removed from the land. It’s not rocket science to see that we can put the pieces back together.

I don’t kid myself by thinking these broken energy systems can be fixed overnight. We’ll need time to restore the grass-based genetics in cattle, time to build the infrastructure on the farms, time to train people to move cattle in high-intensity, short-duration grazing schedules like wild herds, and time to educate the public and lawmakers who only now are beginning to understand there’s a difference.

We need a system that’s productive and sustainable, that can withstand the economic pressures of downturns and depressions, and can be passed on to our children in a succession of family-scale businesses full of culture and color.

Joel Huesby and his family manage Bennington Place, the second farm saved by the PCC Farmland Trust. His family owns and operates Thundering Hooves Pasture Finished Meats, which sells 100 percent grass-fed and finished meats through online buying clubs throughout Washington. PCC is working with the Huesbys to offer frozen ground beef from Thundering Hooves at PCC.

No, I don’t have a steamy romance novel or crime thriller to suggest. The summer reading I recommend will update you on important regional and federal legislation that could improve school food quality dramatically and foster healthier eating habits.

Here’s a fact that may surprise you: 60 percent of the cases of foodborne illness originate in home kitchens! Fast food hamburgers contaminated with e-coli and peanut butter tainted with salmonella get the most press, but some of the most harmful bacteria fester at home.