Beefing Up the Palouse

This article was originally published in August 2009 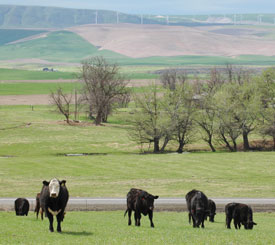 Cows at the Bennington Place Farm in Walla Walla, farmed by Thundering Hooves.

(August 2009) — Livestock often are vilified for producing more greenhouse gases than automobiles. Methane gas and the amount of water and grain required to produce meat and milk frequently are cited as environmentally disastrous.

What’s consistently ignored, however, is the failure of most research to distinguish between animals raised in confined feedlots and animals grazing on rangeland as nature intended in a holistic system. Research on holistic land management is, in fact, showing that large grazing animals are a vital and necessary part of the solution to climate change and carbon sequestration.

A demonstration project in eastern Washington called Beefing Up the Palouse is confirming other worldwide research that cattle grazing could be better for the land than growing wheat or lentils in dryland farming regions. It also may be more profitable for farmers.

Chad Kruger, Interim Director at the Center for Sustainable Agriculture and Natural Resources at Washington State University, calls Beefing Up the Palouse “the most revolutionary and important agricultural project ever in eastern Washington.”

For more on the carbon footprint of grass-fed cows, see the report, Harvesting sunlight.

The project is showing the potential of planned animal grazing to be a sustainable alternative to a federal program that pays farmers to let their land go fallow (the Conservation Reserve Program, or CRP).

“People assume that if you let the land go fallow, it will restore itself,” says Kruger. “But it won’t because the lack of diversity of macro and micro fauna that was part of the larger ecosystem prior to farming. Set-aside land gets to a steady state quickly and doesn’t actually represent a healthy ecosystem.”

Planned grazing mimics natural herd migrations to restore soil and land health. Rather than allowing animals to linger and eat from the same land repeatedly, it practices high-density grazing for a short time, then moves the animals to allow the land long periods of rest and recovery.

Data from the past two years shows great potential in planned grazing to reverse soil decline (erosion and desertification) and restore soil health. Planned grazing replenishes the soil instead of leaving it in stasis (like CRP). Instead of losing carbon through tilling or systems requiring inputs (e.g. wheat), planned grazing sequesters carbon. Most important, it’s more sustainable than CRP for the long term.

Soil erosion from water and wind is being eliminated. Biomass to soak up carbon is increasing. The use of fossil fuel has been reduced by more than 90 percent and wildlife habitat has improved. The project even sells carbon credits. The way the livestock is managed increases the system’s total productivity.

Wheat has been farmed for generations in the Palouse region of southeast Washington. But today, the break-even price for soft white spring wheat (the common crop) is about $5.60 per bushel — while the market pays only $5.24.

Numerous farmers have opted instead to participate in the CRP, preferring $50 per acre to a loss. However, almost one million acres will lose CRP status in the next four years when funding expires. Farmers and ranchers will face tough decisions.

Gregg Beckley, the owner and operator of G and L Farm in Adams County, has been an early adopter of innovations. I joined him in launching Beefing Up the Palouse with plenty of help from Governor Gregoire, Washington State University, Tilth Producers of Washington, the Ruckelshaus Center, Thundering Hooves, and PCC Natural Markets.

We hope that as CRP land contracts expire, farmers will look to this demonstrated model as a viable alternative to benefit themselves and the land.

Maurice Robinette is a cattle rancher and co-founder of Managing Change Northwest, a nonprofit specializing in ecosystem management.

Choosing farms to save: the basics of good soil and water

Quite often, the PCC Farmland Trust is asked about the criteria for projects. Are we interested in saving large or small farms? Do we have regions of priority? Are we interested in working on the east side or the west side of the mountains? To all of these, we answer yes.

Here’s a fact that may surprise you: 60 percent of the cases of foodborne illness originate in home kitchens! Fast food hamburgers contaminated with e-coli and peanut butter tainted with salmonella get the most press, but some of the most harmful bacteria fester at home.