This article was originally published in September 2007 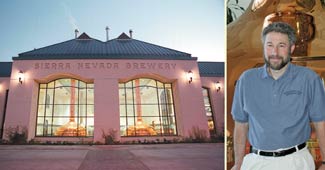 The temple of hoppiness — a beer drinker’s Oz. Sierra Nevada Brewing is a monument to the idea that quality and sustainability go hand in hand. Right: Ken Grossman, Wizard. Ken brewed the very first batch of Sierra Nevada in 1980 and remains head brewmaster to this day.

The Sierra Nevada range separates California from Arizona and Nevada and supplies an iconic name for countless local businesses, from greasy spoon to pawn shop to savings and loan. But none do the name justice like Sierra Nevada Brewing.

The Sierra Nevada label, depicting a mountain stream and distant, snow-covered peaks, hints at what is in the bottle as well as the vision that inspired it. That the label has remained virtually unchanged since the brewery was founded is an apt indicator of the quality and character of the amber liquid behind it. But the integrity of the image doesn’t stop there.

The brewery is in Chico, California, which nestles between the meandering bends of the lower Sacramento River and the foothills of the Sierra Nevada. It’s a place on the edge and in between with untamed mountains as its backyard and the cultivated plain of the Sacramento Valley as its lawn — part libertine college town, down-to-earth agricultural hub, and just a plain, nice place to raise kids.

In 1980 Ken Grossman brewed his first batch of Sierra Nevada Pale Ale here, using an assortment of salvaged brewery equipment, dairy tanks, a soft drink bottler and the nearby mountains as inspiration.

Both beer and label are a poster for a set of values that measures success in terms of quality and looks at business from a big-picture perspective. Brew the best beer possible, run the business to be successful for a hundred years, and embrace challenges as invitations to be even better — the dollars will take care of themselves.

News of great beer gets around fast (to this day, Sierra Nevada doesn’t advertise, quality beers speak for themselves), and demand quickly outgrew the brewery’s capacity. When a series of additions still couldn’t supply the growing demand, in 1989 Grossman designed a new brewery to be built at the present site. This was enough to slake the thirst for Sierra Nevada for awhile, but by 1997 another expansion was necessary, this time bringing capacity to nearly 800,000 barrels per year.

The blueprint for this amazing growth is Sierra Nevada’s commitment to being the best possible corporate citizen and environmental steward, a focus that makes the brewery a model for sustainable businesses of every flavor. Here are just a few of Sierra Nevada’s innovations:

And there’s the beer. While many breweries homogenize flavor profiles to appeal to a broader market and cut corners to pad the bottom line, Sierra Nevada remains true to its delicious roots.

Ken Grossman still is head brewmaster and has a hand in every aspect of brewery operations. The beer remains an uncompromising product of the best barley, hops, yeast and water available.

I love beer. And it’s pure “hoppiness,” as they say, to open my refrigerator and find the cool, familiar bottles, knowing that the beer inside and the inspiration that created it are as constant and uncompromising as the mountains on the label.

Saving farmland: in the spirit

Letters to the editor, September 2007