A clean drink of water

This article was originally published in August 2006 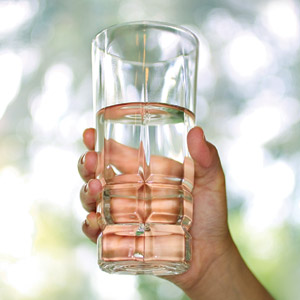 What goes around comes around — especially with water. For optimal health, know your water and what the choices are to get the best drink in town.

(August 2006) — Since the human body is estimated to be 50 to 65 percent water, it’s no surprise that safe and pure drinking water is important to good health. Sales of bottled water and water filtration systems have skyrocketed as more people question what comes out of the tap. Yet, bottled water often is no healthier and the quality of filters varies widely.

To help you understand your choices, here’s a primer to get a good, clean drink.

What’s in the water
Water quality can vary greatly from state to state and even town to town, depending on the water’s source, industrial and agricultural activity, and even the materials used for piping.

Last year, the Environmental Working Group (EWG) analyzed more than 22 million tap water quality tests from around the country and found 260 contaminants in the public water supplies. Of these, 141 are unregulated chemicals that lack safety standards.

The EWG says that water utilities have achieved almost 100 percent compliance with enforceable water quality rules. The problem, according to EWG, is the Environmental Protection Agency’s “failure to establish enforceable health standards and monitoring requirements” for these widespread water contaminants.

Many PCC customers bring in one-, three- or five-gallon bottles and fill them at PCC’s self-serve stations with Custom Pure filtered water.

Water quality is monitored and filters are changed as often as once a week, depending on volume processed, to ensure purity.

A spate of news stories also indicate that pharmaceutical drugs are making their way into the nation’s water supply. These may include antibiotics, anti-depressants, cancer treatments, birth control pills, seizure medications, tranquilizers, pain killers and more. They may come from hospitals and homes, and in the case of antibiotics, from animal feedlots.

So far, according to the World Health Organization, these chemicals are in low enough concentrations that they shouldn’t pose much of a health risk, but long-term exposures have not been evaluated.

Comparatively, Seattle’s water is better than many cities’, or even most. In 2001, the Natural Resources Defense Council (NRDC) surveyed 19 major American cities and reported that our region does an excellent job of protecting our drinking source waters, including the Tolt and Cedar River and Spada Lake watersheds (serving Edmonds, Lynnwood, Mountlake Terrace, Shoreline, Seattle, Bothell, Woodinville, Kirkland, Bellevue and Mercer Island).

Those watersheds do not have contact with effluent from sewage treatment plants, which include many contaminants. Other local communities, including Redmond, Issaquah and Renton, rely on underground water sources.

But even if the source water used is relatively clean, there are other points where water quality and safety can diminish. Old piping can impact water quality. Last year the Seattle Post-Intelligencer reported that 60 percent of new drinking fountains in Seattle’s schools, installed to reduce water contaminants, failed to meet the district’s standard for lead contamination.

There are tools available to help us learn about the quality of our tap water. Each year, water districts with 10,000 or more customers mail out a drinking water quality report that tells folks where their water comes from and what’s in it. Your district’s annual report may be posted on the Environmental Protection Agency’s Web site, at epa.gov/safewater/dwinfo/index.html.

If your report isn’t there, visit the Environmental Working Group’s National Tap Water Quality Database at www.ewg.org/sites/tapwater/ to look up your district.

The reports should contain details of your drinking water quality; contaminants found in the water and where they came from; and descriptions of possible health effects of contaminants detected at levels greater than allowed by federal or state standards.

Should I use a water filter?
The NRDC says that healthy adults can drink tap water in many American cities without concern. But pregnant women, young children, the elderly and people with weak immune systems are particularly at risk from contaminants.

The NRDC and Consumer Reports both recommend that you check your district’s water report to find out what contaminants might be in your water. Lead levels can vary widely from home to home, so consider testing the water for lead, especially if you have kids or are pregnant. You can order a lead test kit for $24 from leadtesting.org.

If you want to install a water filter in your home, you have numerous options that vary greatly in cost and type.

Pour-through carafe systems are the cheapest choice. Tap water simply drips from a top chamber through a filter to fill a reserve for drinking. Consumer Reports says all the carafes it tested rated very good or excellent for removing chloroform and lead. Most do not take out other contaminants, such as fluoride or other metals.

Faucet-mounted systems also are inexpensive but quality varies widely between brands and models, and flow rate is fairly low. Some remove lead and parasites, such as cryptosporidium. Usually they use carbon filters, which must be changed frequently.

Under-the-sink systems are more costly, but often use two or three filters to remove more contaminants. They also deliver water faster and are less susceptible to clogging.

No matter the system, change filters regularly. Not changing them often enough can promote bacterial growth and allow contaminants to return to the water.

In 1999, the NRDC released a four-year review of the bottled water industry, including independent testing of more than 1,000 bottles of 103 brands of water: “Our conclusion is that there is no assurance that just because water comes out of a bottle that it is any cleaner or safer than water from the tap.

In fact, an estimated 25 to 40 percent of bottled water really is just tap water in a bottle — sometimes further treated, sometimes not.” The NRDC says about 22 percent of the samples they tested contained contaminants at levels higher than allowed by strict state health limits.

Bottled waters that are treated, including those sold at PCC, will explain the process used. Labels should declare where the water is from.

The Earth Policy Institute notes, however, that at $2.50 a liter, bottled water is almost as costly as gasoline and filling up corporate coffers. The Sierra Club Water Privatization Task Force discourages the use of bottled water along with other forms of corporate water privatization.

Environmentally, bottled water is problematic. Besides using fossil fuels to make the bottles and transport them, an estimated 86 percent of plastic water bottles used in the United States become garbage. E magazine says 30 million water bottles each day find their way into U.S. landfills, where they can take 1,000 years to biodegrade.

What you can do to support clean water
Numerous national and local groups are working hard to promote clean water. The Fluoride Action Network (fluoridealert.org) and a local group, Washington Action for Safe Water (safewater@comcast.net), are working to end public water fluoridation. And last year, the Washington State Department of Agriculture (WSDA) signed a settlement with the Washington Toxics Coalition and People for Puget Sound that significantly increases protection of lakes against pesticide applications.

Under the agreement, WSDA no longer will allow applications of herbicides to lakes without permit approval from the State Department of Ecology (DOE). Homeowners no longer will be able to apply pesticides to lakes until the DOE establishes a new permit for that purpose. (In 2004, 75 separate herbicide applications were made to Lake Washington, many of them by homeowners.)

But even though the Seattle area’s drinking water sources are well-protected, what we do at home eventually drains to watersheds and degrades the water used by wildlife and farmers for agricultural irrigation.

Philip Dickey, staff scientist at the Washington Toxics Coalition, explains, “Sewage treatment plants are designed to break down or remove detergents, food waste and human sewage, but not pesticides, oils, solvents, fuels or other hazardous chemicals. Some of these chemicals pass through treatment systems without breaking down … We all should act as if we live on a lakefront or have a stream running through our property, because, in effect, we do.”

In other words, what goes around comes around — especially with water. For optimal health, know your water and what the choices are to get the best drink in town.

What are Ends policies?, Talk to the Board, Board meeting report, and more