The National Academy of Sciences reports on fluoride

This article was originally published in August 2006 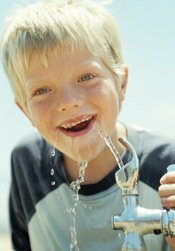 (August 2006) — In 1945, Grand Rapids, Mich., became the first city in the world to add fluoride to its water supply — an effort meant to transform ordinary H²0 into a dental-health elixir. Since then, fluoride, a toxin with a purported heart of gold when it comes to protecting your teeth from decay, has been debated, doubted, defended, derided — and added to one water supply after another.

Today about 170 million people in the United States have fluoridated water flowing from their taps. That includes you if you live in Seattle, Woodway, Kirkland and Redmond or another city where fluoride is added to municipal supplies.

But this spring, the venerable National Academy of Sciences (NAS) may have quietly shifted the future of fluoridated water supplies when it unleashed “Fluoride in Drinking Water: A Review of EPA’s Standards,” a long-awaited report (three years in the making) commissioned by the Environmental Protection Agency (EPA).

The NAS was charged with reviewing the EPA’s current maximum contaminant level goal (MCLG) for fluoride — meaning, the amount of fluoride that the EPA says can be present in drinking water without compromising your health.

The NAS’ conclusion: The current MCLG of 4 parts fluoride per million parts water (4 ppm) is too high to protect people from the adverse effects of excess fluoride consumption — including severe discoloration and pitting of tooth enamel, weakening of the bones, and increased risk of bone fractures. The report lists additional fluoride-related health risks that warrant more research, including gastrointestinal disorders, hormonal problems and neurotoxicity.

Bottom line: Too much fluoride is bad for the bones, body and brain — and 4 ppm, a quantity of fluoride naturally present in some water supplies because of mineral secretions from nearby rocks and soil — is too much fluoride.

What is the ideal fluoride level?
The NAS was not tasked with identifying what an ideal MCLG for fluoride would be. And the EPA didn’t ask the academy to assess the safety of water fluoridation, which is carried out using fluoride concentrations of only about 1 ppm. The NAS report officially is silent on both issues.

But panel members have reached their own conclusions about what an appropriate MCLG would be — and what it would mean for water fluoridation.

In an email interview with Sound Consumer, scientist Kathleen M. Thiessen — one of the 12 committee members who oversaw the NAS fluoride review — observes, “I personally do not think that a responsibly set MCLG would be high enough to allow for water fluoridation.”

She adds that “information presented in the … report indicates a safe MCLG for fluoride would be less than 1 ppm” — a number that would render fluoridation impossible. It also would indicate that the water many Americans are drinking may be hazardous to their health.

At least one panel member has stated that he believes fluoridation is not dangerous, but Thiessen notes that others on the NAS committee share her doubts about the United States’ 61-year-old fluoridation program. “I’m not the only one,” she says.

Possible next steps
“We’re a stone’s throw away from ending fluoridation … if honest science prevails at the EPA. And that’s a huge if,” says Paul Connett, executive director of Fluoride Action Network and professor emeritus of chemistry at St. Lawrence University.

Although the EPA commissioned the NAS report, it’s not bound to the recommendations. The agency may not want to make any decision that would derail a long-running program that the U.S. Centers for Disease Control and the American Dental Association have insisted is safe. The EPA hasn’t revealed when, or if, it will establish a new cap on fluoride in drinking water.

So, for now, what are 170 million fluoridated water drinkers supposed to do?

Certain types of water filters can reduce fluoride substantially, but “then, unfortunately, having spent a fortune, this doesn’t do any good with every cup of coffee you have downtown,” Connett says.

That’s why he suggests pushing the EPA to act sooner rather than, say, 10 years later on the NAS’ call to lower the MCLG for fluoride in drinking water — and rallying your municipal government for a change: “Tell [city] authorities to stop this until the research has been done,” Connett says. “It’s as easy,” he adds, “as turning off a tap.”

What are Ends policies?, Talk to the Board, Board meeting report, and more

Insights by Goldie: Vitamin D: a nutritional super-hero (may be) missing in action