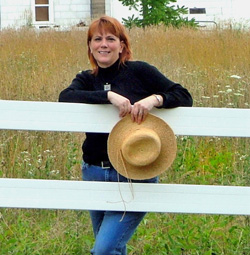 As a mother, Theresa Knaack was concerned that her children seemed to get ear infections repeatedly and wondered if the antibiotics in livestock might be contributing. So she decided to spin off a new business to produce and sell only natural pork and chicken products, and in 2001, Purely Natural, Inc. was formed.

(October 2005) — With growing consumer demand for more pure, antibiotic-free meat, some energetic individuals like Theresa Knaack are encouraging the evolution of the industry from within.

Several years ago, while Theresa was doing sales and marketing for a conventional sausage company, she noticed business dropping off because of changing consumer habits. As a mother, she also was concerned that her children seemed to get ear infections repeatedly and wondered if the antibiotics in pork, poultry and other livestock might be contributing.

So she decided to spin off a new business to produce and sell only natural pork and chicken products, and in 2001, Purely Natural, Inc. was formed. At PCC, Purely Natural’s fresh pork is sold as the Pure Farms brand, and their bacon and sausages currently are sold as the Pure Foods brand, but many will be found with a PCC label in the near future.

What began as a relatively simple concept has grown into an exciting adventure for Theresa, now president of Purely Natural. “When we started, we purchased our raw materials from other pork producers, and as our business grew, we started partnering with cooperatives to grow our own, dedicated herd of hogs. I continually search for new co-ops that are forming to try and partner with them.”

Purely Natural brings its experience in product development, marketing and sales to co-ops that may just be starting out and don’t have much knowledge in the natural aspect of the industry.

“Sometimes we find an established group of farmers who don’t know what a jewel they have, raising their hogs outdoors with no antibiotics,” says Theresa. “We help farmers who are looking for a place to sell their specialty meat. Their expertise is growing hogs beautifully. We can help them find processors and bring their product to market. We team with both cooperatives and individual farmers.”

Purely Natural contracts with cooperatives and farmers to raise hogs under Pure Farms’ humane growing standards and ensures the farms are audited by a third party for certification.

Pure Farms brand follows and is audited under the guidelines of the Humane Fair Animal Care organization. Their products carry the Certified Humane Raised and Handled label. “How our farms differ is that the hogs are not confinement hogs,” says Theresa. “They do not use furrowing crates, and the animals are raised on deep-bedded straw. Of course, Pure Farm hogs are never given antibiotics and are fed an all-natural diet, with no animal byproducts in the feed.”

Purely Natural products are all from hogs raised on small farms. Each farm in the dedicated Ozark Mountain cooperative has only 100 sows, or fewer, per farm, making them individually small family operations.

Theresa has met many small farmers whose common thread is that they don’t want to lose their family farms and they take pride in the heritage of their family history. “It’s exciting to work with those folks because they are so vested in succeeding. I know how hard they are working with and for us because it means so much to them.”

Theresa says that almost 80 percent of the small farmers also have full-time jobs to sustain their farms. “But,” she adds, “they would not have to subsidize their farms by working a full-time job if their beautifully grown hogs were marketed as a specialty, natural product. That way, they could demand a premium price and keep out of the commodity market, where the small farmer has little control over what a large packing outfit may end up paying for his finished hog.”

One of Purely Natural’s new partners, Meadow Brook Farms Cooperative, also processes hogs. Theresa explains, “I read about them and was impressed that not only were they forming a producer group to grow hogs but they were also building a state-of-the-art processing plant. I made a visit to the plant before they opened and we partnered with them to process hogs for Pure Farms.”

Theresa is constantly reminded that there are still many family-owned farms out there, with lots of colorful characters, as she continues to meet with farmers and cooperatives. “At one father-son operation, the dad in his 70s has to hop off his tractor to go watch Judge Judy each day. It reminds you that most of us are so far removed from the small, family-farm lifestyle.”

As Theresa searches for ways to expand and improve the Pure Farm and Pure Foods brands, some of the best ideas have come from moms and dads who call and ask about the products. For instance, do they contain nitrates and MSG, which can aggravate asthma. “I’ve learned a lot from customers,” says Theresa.

From the example of Purely Natural and cooperatives that produce natural pork, Theresa is starting to see large-scale conglomerates make changes in how they operate. She has been talking to them and asking them to start initiating natural hog programs.

“You can’t change people by a revolution in the pork industry. I see my way as an evolutionary process. If you work within the system, you can show by example that it’s good business for them to turn their production to more natural and humane methods.”