Are you sensitive to certain foods?

This article was originally published in May 2005 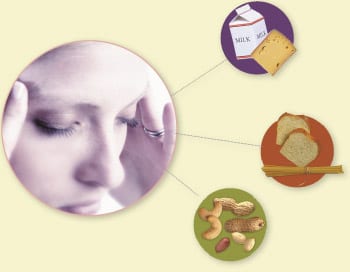 (May 2005) — Food is a source of great pleasure as well as sustenance for all the world’s people. Yet sometimes, it also can be a source of sensitivity, even without our knowing it.

Have you, for instance, ever suffered from unexplained headaches, irritability, anxiety or mood swings? Have you struggled with hay fever, asthma or chronic sinus infections that resist conventional treatment? How about sleep disorders, skin rashes, or weight gain or loss that persists no matter what you do?

These are just a few of the many common ailments associated with food sensitivities and allergies. Food-related illness is often misdiagnosed because many of the symptoms are also symptoms of other health problems.

In fact, the American Academy of Allergy reports that unrecognized food allergies are responsible for 60 percent of all the symptoms that doctors are consulted for that are not diagnosed or treated. That means most of the people you know are sensitive or allergic to some food. The results of these sensitivities run the gamut from uncomfortable reactions to debilitating, chronic diseases. Over the years, they can have a cumulative effect that may even shorten your lifespan.

Sensitivities vs. allergies
Food sensitivities (or intolerances) and true food allergies can have similar symptoms, but they are not the same. A food sensitivity or intolerance refers to the body’s adverse reaction to food but does not involve the immune system. Food intolerance stems from problems with digestion or metabolism, often involving a defect or deficiency in an enzyme in the body. The majority of adverse food reactions are considered sensitivities.

A food allergy refers to a response by the body’s immune system to a food or a component of a food, reacting to it as though it’s harmful and creating antibodies to it. When the individual eats that food, the immune system releases large amounts of chemicals to protect the body. These chemicals trigger symptoms.

It’s important to understand the distinction between allergies and intolerances because although food intolerances can be unpleasant, they rarely pose an immediate threat to health. In contrast, food allergies can cause serious health problems and even can be fatal.

The good news is that food allergies are relatively rare, affecting only about 5 to 8 percent of children and 2 percent of adults in the United States. Although as many as one-third of Americans believe they suffer from food allergies, the vast majority of them, in fact, are experiencing food sensitivities or intolerances. Still, many more are unaware that food may be the culprit in what ails them.

It’s not uncommon to look for other causes of discomfort when trying to ascertain why you don’t feel good after you eat. We’ve all used explanations of the flu, food poisoning, just “under the weather” or “it must be something I ate,” which ironically could be absolutely correct.

One reason for shrugging off the possibility of a food sensitivity or allergy is that no one wants to eliminate foods that they enjoy. If you entertain the idea, for instance, that you’re intolerant of casein (the protein in dairy), the hard reality is that many delectable foods should be eliminated from your diet such as yogurt, butter, sour cream, cream sauces, ice cream and, dare I mention, cheese.

Foods most likely to cause sensitivities or allergies

While just about any food can cause sensitivity or an allergic response, 90 percent of food sensitivities are caused by the following:

“I already had given up coffee and all sweets when my naturopath suggested eliminating wheat and dairy to get my high blood pressure under control,” says one longtime PCC member. “I thought she was off the wall and really reaching and politely told her so, but agreed to humor the suggestion anyway. Well, in just three days, I noticed a significant difference. I wasn’t so irritable or overwhelmed by small things. I felt calmer and began sleeping through the night, and my rosacea improved. After a month, my blood pressure had dropped 35 points! Consuming the wrong foods for me means potential heart trouble, or not.”

In my case, I have celiac disease and coming to terms with eliminating all foods with gluten was, by any measure, difficult. But there is no choice with celiac. A mandated lifelong gluten-free diet is the only treatment.

Many people get so frustrated with symptoms that seem to have no cure, they slip into denial by just getting used to the way that they feel. Maybe they always have felt tired or moody, or have headaches or feel bloated after eating. It is surprisingly easy to get used to feeling lousy.

PCC Cooks instructor Marie Donadio says her son suffered for more than a year before they figured out what was wrong. “When my son was in second grade,” she says, “he had a runny nose for almost a year — a constant, thick drip. He was being teased and it was a problem. Finally, we did some allergy testing and the doctor took him off wheat and dairy. Within three weeks, it all dried up. It was remarkable. Instead of breathing from his mouth, he could breathe normally. He went without wheat and dairy for about a year and a half. Since then, we’ve reintroduced them back into his diet, although only once in a while and in small portions.”

“I’m also sensitive to wheat, eggs and diary,” says Marie, “and went wheat-, dairy- and egg-free for more than a year. Now, I find if I limit my intake and have them only once in a while, I’m OK, too. Otherwise, they’ll cause a flare of symptoms.” Marie turned her creative cooking energies into facing the family’s challenges with gusto, developing scores of delicious wheat-, dairy- and egg-free recipes. Today, Marie is one of PCC Cooks’ most sought-after instructors whose recipes reflect awareness of food sensitivities.

For me, it took more than 20 years to find out I was allergic to gluten and had celiac disease. Another PCC member says she suffered from constant digestive problems her whole life until recently. “I had cramps and bloating as long as I can remember,” she says, “until recently when I eliminated wheat from my diet. I really didn’t know how bad I was feeling until I began feeling better.”

The truth is that feeling bad, especially chronically, is not normal, and a fair amount of discomfort after eating can be attributed to food sensitivities. Some food sensitivities can be identified easily because of a pattern of distress after eating a particular problem food. Others are not so easy because the reaction may not be immediate or can be complicated by the presence of multiple sensitivities.

Peanuts, tree nuts, shellfish, fish, milk and eggs commonly cause very serious allergic reactions called anaphylactic reactions. Some people can experience a reaction from only a trace amount of a problem food.

Anaphylaxis is a sudden, severe, potentially fatal, systemic allergic reaction that can involve various areas of the body (such as the skin, respiratory tract, gastrointestinal tract and cardiovascular system). Symptoms usually occur within minutes to two hours after contact with the problem food. Anaphylactic reactions can be mild to life threatening.

Getting help to feel better
The difficulty in self-diagnosing a food sensitivity or an allergy is that in many cases the symptoms are similar. The only way to be certain about how sensitive you might be and to what degree is to seek professional expertise, preferably a nutritionist, who often is covered fully by insurance plans.

The most accepted way to identify an intolerance or allergy is to remove the suspected food or component of food from the diet for a period of time — at least several weeks — and then reintroduce it. This can require discipline and patience, especially if more than one food is suspect.

Besides dietary discipline, other treatments include supplements, medications and/or desensitization immunotherapy (such as allergy shots) and acupuncture.

Why are we sensitive?
There are no definitive answers and a lot of speculation on what makes someone sensitive to certain foods. One reason is probably heredity. With celiac disease, which is hereditary, one must have the gene, ingest gluten and experience a “trigger,” which can be any major event or experience, emotional or physical.

A person also may become sensitive or allergic to a certain food after a lifetime of having no problem with it — possibly from eating too much of the same food over and over without much variety in the diet. Rotating what you eat, not eating the same things all the time and keeping your diet very diverse may be one of the best ways to avoid developing a sensitivity, although the research hasn’t been done yet to support this.

The seemingly rising numbers of people suffering from food sensitivities and allergies also could lead one to hypothesize that either our eating habits or perhaps the food source itself is somehow responsible for the phenomenon. Could it be that the typical American diet of fast-food and convenient foods, most manufactured with copious quantities of additives and preservatives, are taking their toll? Or is it that we are experiencing the results of years and even generations of consuming high-yield, mass-produced products?

The widespread use of artificial growth hormones and preservatives has revolutionized America’s food supply, serving up a heaping helping of pumped-up food “products” that resist the natural effects of nature and have frighteningly long shelf lives. Could it be that diets comprised of fewer species of corn or wheat or other foods grown from just one strain of seed or animal instead of hundreds of heirloom varieties are the cause?

Food should be our sustenance, not an enemy. If you’ve read this far, it’s likely that you understand the importance of natural and organic foods. So while I may be “preaching to the choir,” I find it an interesting coincidence that all top offending foods for sensitivity have been bred for maximum yield and many processes manipulate and alter them from their original, natural states. One could argue that even fish and shellfish sensitivities might have a relationship to pollutants in water.

There is no hard research, only the physical evidence around us, to support my theory regarding the rise of food sensitivities. If the premise were accurate, would switching to an all-organic and natural food diet eliminate such sensitivities? The jury is out on that one, but it couldn’t hurt.

Yvonne Gifford is a chef and co-founder of www.Glutenfreeda.com, an online gluten-free cooking magazine and a PCC Cooks instructor.

More resources
PCC offers a variety of cookbooks for people with allergies and books on the elimination/rotation diet to pinpoint sensitivities. The selection may vary from store to store.

Our PCC Cooks program also is a great place to get creative menu ideas for people with food sensitivities. Of the 42 classes offered this spring and summer, 17 use no dairy products, 19 use no eggs, and two specify no wheat (Marie Donadio’s soup class and Yvonne Gifford’s class, “Gloriously Gluten Free”). See our printed catalog available in all stores or visit www.pcccooks.com to browse class listings. Look for the notations indicating what classes are wheat-, dairy- or egg-free.

Vote now — PCC annual board election April 28 through May 27, An important message to our valued member/owners, Notice of ballot count meeting, and more