The true cost of food

by Judith Yarrow and Trudy Bialic

This article was originally published in May 2004 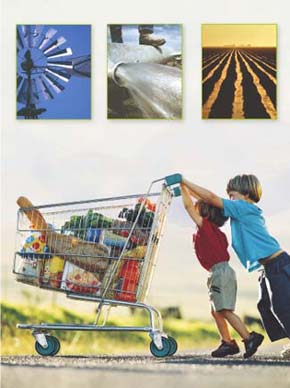 (May 2004) — What is the real cost of food? The tangible costs at the checkout stand are obvious, but what about the intangibles? How much more does food cost than what we see on our receipts?

Francis Moore Lappé, author of “Diet for a Small Planet” and “Hope’s Edge” says, “We’ve actually let market prices lie to us. They don’t register all the hidden costs of our ‘factory farming’ model, costs that undermine the very sustainability of nature’s gifts.” She continues, “Food prices don’t count the fact that soil is eroding on prime farmland many times faster than nature rebuilds it, or the marine life we’re losing because of nitrogen runoff from overusing fertilizers.

The prices don’t include the loss of plant diversity that occurs when our seed is supplied by just a few companies aggressively marketing a limited selection, or when the wells in Midwest states are poisoned by farm chemicals. Eating it adds a host of additional costs, including more than 5,000 deaths each year from food-borne illnesses, even as agribusiness — especially the meat industry — has fought against adding the cost of stricter food safety procedures to the bottom line.”

The Worldwatch Institute reported as long ago as 1991 that the price of meat alone might double or triple if the full ecological costs — including fossil fuel use, groundwater depletion, chemical pollution, and methane and ammonia emissions — were included in the bill.

Who will pay?
The core of the food costs issue turns not so much around the question of how expensive it really is, but who will pay. Future generations will pay the environmental prices our society finds ways to avoid today. As for the short-term costs — environmental regulation, pollution cleanup, elimination of subsidized water prices, agricultural policies that foster family farms, and research into organic practices — who will pay these costs now? Taxpayers, through regulation and subsidies? Or consumers, through higher prices?

“If you withdrew all the subsidies and considered the reduction of taxes, it probably would be worth the increased price of food,” observes Dr. John M. Connor, a professor of agricultural economics at Purdue University. But low-income people and the elderly already spend a large portion of their income on food. What happens to their nutrition if food prices rise?

David Granatstein, statewide coordinator for the Center for Sustaining Agriculture and Natural Resources at Washington State University, believes it makes more sense to spread the environmental costs over a larger number of people. “Government intervention, by regulation, is one tool to deal with external costs so they affect people equally,” says Granatstein. “It allows us to address issues that don’t reflect personal health, such as soil erosion and water pollution, for which people are less willing to pay higher food prices.”

Subsidies: a complex issue
The easiest dollars to track are government agricultural subsidies. The USDA spends about $20 billion a year on direct subsidies, most of it to keep prices on a few crops such as wheat, corn, soybeans and rice below the true cost of production and therefore competitive for export. This policy has allowed the prices charged for grain products to be much lower than the cost of production. (See Earth Day, farm policy, and what consumers need to know, April 2004 Sound Consumer.)

Indirect subsidies also contribute to the marketplace prices of food being below true costs. A glaring example is the pricing for irrigation water. In the United States, the Bureau of Reclamation supplies water at greatly subsidized prices to a quarter of the West’s irrigated land under long-term contracts.

Intangible costs
Over and above the subsidies paid for by taxpayers, other less easily measured costs are not reflected in the market price. Some are correctable — water pollution from fertilizers, pesticides, sediment and animal manure, or health damage to farm workers from pesticides. Others are outright losses — topsoil erosion, depletion of aquifers, and reduction of plant and animal biodiversity and of an economic base in rural communities.

Some of these costs are beyond price. What will the weakening of rural communities cost us as a culture? We have no models by which to measure. But some of the other costs are hinted at in government and industry reports.

Water: pollution and depletion
“Water is the main issue. It will be more and more a driving issue in the next decade,” says Theresa Marquez, chief marketing executive at Organic Valley. Water issues revolve around pollution and depletion. Non-organic agriculture is the biggest polluter. According to the U.S. Environmental Protection Agency Waste- water Management Director Michael Cook, “[Non-organic] farming is responsible for 70 percent of waterway pollution, outstripping sewage treatment plants and pollution deposited from the air.” Organic farming methods, in comparison, prevent soil erosion and protect water quality.

Water is considered a renewable resource, but many agricultural areas are facing declining water supplies. Many farmers depend on wells for their irrigation water, and many of those wells are pumped in excess of recharge by rainfall. Other irrigation projects draw from so-called “fossil” aquifers — ancient water supplies, often deep underground — that get very little recharge. Pumping water from these aquifers could be called “water mining,” one-time extractions from a non-renewable resource. Once it’s gone, the farmers’ crops depending on it are gone, too.

The Worldwatch Web site explains, “Over pumping of underground aquifers is causing water tables to fall precipitously in parts of northern China, India, the western United States and elsewhere. One-fifth of U.S. irrigated land is watered by pumping in excess of recharge, a practice that eventually makes irrigation too costly to continue and can even drain some aquifers dry. Irrigated area in Texas, where groundwater depletion has been particularly severe, has fallen 30 percent from its peak in 1974.”

Soil erosion and salinization
The plowed fields of traditional farming methods expose the topsoil to erosion by wind and water. The cost of lost topsoil is difficult to measure, but most farmers and researchers agree it’s happening at a faster rate than soil is forming, and that it leads to reduced production.

Maintaining topsoil is of obvious benefit to farmers. “We’ve seen a rapid adoption of no-till production methods in U.S. agriculture in the last five or six years,” says Purdue’s Connor. “But the trade-off is that it requires the use of herbicides.” Besides soil loss through erosion, soil is lost to agricultural production through salinization as a result of irrigation. As time passes, evaporation of irrigation water leads to a steady accumulation of salt in the soil. Eventually the built-up salt makes the soil unusable.

Worldwatch reports, “Poor water management leading to a steady accumulation of salt in the soil has damaged 60 million hectares, roughly one-fourth of the world’s irrigated land. Now suffering reduced yields, this land requires costly reclamation; some of it eventually will have to be abandoned.” Worldwatch calls salt pollution “the silent scourge that played a role in the decline of ancient Mesopotamian societies.”

Agricultural land is also lost to expanding cities and suburbs. “When people move into the subdivisions in the Skagit Valley, how much does that add to the real cost of food?” asks Granatstein.

The cost of industrial farming
David Pimentel, an entomologist at Cornell University, calculates the environmental and social costs of pesticides in the United States to be more than $8 billion. His study breaks out costs in public health impacts, domestic animal deaths and contamination, loss of natural predators, cost of pesticide resistance, honeybee and pollination losses, crop, fisher, and bird losses, groundwater contamination and government regulations to prevent damage.

Then there are the social and biological costs of industrialized farming. “Subsidized factory farming drives small family farms out of business,” says Marquez. “One 5,000-cow dairy has replaced as many as 200 family farms. Who can put a cost on that? We’re sacrificing our rural farming communities.”

Industrialized farming also puts added pressure on biodiversity and reduces traceability of food. “When the food system is commercialized,” says Margaret Clark, former member of the National Organic Standards Board, “there’s a loss of information. There’s no way to know how a piece of food is grown. We also pay a price in terms of the genetics of food,” she adds. “There’s a loss of genetic diversity as produce is bred for longer shelf life and standardized quality.”

Organic agriculture pays costs now
There is a way to reduce some of the costs. “Since agriculture is one of the largest non-point polluters, changing to organic practices would reduce water pollution and lead to lower clean-up costs,” says Katherine DiMatteo, executive director of the Organic Trade Association.

“Methods developed for organic agriculture are designed to address the types of impacts traditional agriculture has had,” says Joe Bennett, horticulturist at Cascadian Farms. “They create soil that has more character. It retains water better so there’s less runoff, which means less sedimentation in streams and lakes. Since organic methods don’t use pesticides, including herbicides, pesticide pollution is eliminated.”

Granatstein cautions, however, that the biggest agricultural pollution problem is sediment and nutrients, not pesticides. “Organic standards don’t guarantee you’ll eliminate those problems. Organic practices also must be well managed.”

Consumers mold the marketplace
As consumers, our shopping practices can encourage farmers to use organic methods. If we want the long-term costs to be addressed now, we must support farmers who use sustainable, non-polluting practices. “Consumers have the ultimate control,” says Granatstein. “They have to be willing to pay for it and the market will shape it.”

“We have to see differently, then measure and count the real costs of producing food,” says Lappé. “We’ve boasted that ours is the world’s most efficient food system, but no business could stay afloat for long while ignoring its real costs. Efficiency and sustainability — the maintenance of Earth’s gifts to us and our health over time — can no longer be seen as contradictory aims. Once we dispel the myth of efficiency hiding costs, we discover that sustainable is synonymous with real efficiency — getting the most of our resources over time.”

Food costs are complicated, but every consumer helps draw the line for who will pay and where the market will move. When we pay the higher prices of organic produce, we’re not just paying for personal health, but for a healthier environment, long-term sustainable agriculture, and stronger rural economies. With every dollar put forward for local and organic produce, we stimulate sustainability.

May 3 through May 28, PCC Board activities, Talk to the Board, and more