Earth Day, farm policy, and what consumers need to know

This article was originally published in April 2004 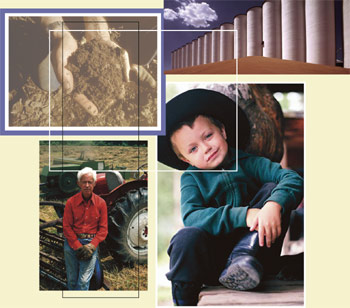 (April 2004) — Food, next to life itself, is our greatest common denominator. A reflection of the culture it feeds, its availability, quality, price, and its moral and religious significance make it literally history’s “staff of life.”

As we in the United States celebrate another Earth Day, spring equinox and planting season, many PCC shoppers and other consumers are increasingly aware that our nation’s traditional claim as home to the cheapest and safest fed people on earth is beginning to ring hollow, even as government and corporate agribusiness seek to perpetuate such myths. As one reads the headlines, it’s clear that farmers as well as consumers are paying a higher and higher quantitative and qualitative price for food, although it’s often obscured behind advertising or official reassurances.

Large corporations seeking to control the food system have besieged family farm agriculture in recent decades. To corporations, food is no longer viewed first and foremost as a sustainer of life. Instead, it’s a major source of cash flow, economic leverage, a form of currency, a tool of international politics, an instrument of power — a weapon. Increasing market concentration, calls for more “free trade,” lower commodity prices, and the bogus need for greater “efficiency” and “competition” all have a devastating effect on rural communities and the agricultural economy that sustains us.

For the most part, farmers — due to a desire to align themselves with the managerial class, historical allegiance to a conservative political tradition, and a need to survive — have acquiesced to the political and economic power of agribusiness. Consumers, meanwhile, accustomed to having ample supplies of food, generally remain impervious to the fallout from such power as they glorify farming and the rural life while often denigrating the farmer. Thus, eating has become a political act.

Most consumers, moreover, have little or no knowledge of government farm policy and its affects. Following are a few key points to understand.

The politics of farm policy
For our nation’s family farmers, Presidential election years usually are filled not only with empty promises, but also generous amounts of political stereotyping. 2004 seems to be no exception. Trade issues, genetic engineering, mad cow scares and subsidies undoubtedly will be addressed as this year’s campaign progresses.

Yet two key issues concerning family farmers — fair prices for their products and fair and competitive markets — likely will be ignored. These two issues should be top priority for any candidate.

Twenty years ago, Jim Hightower, the former Texas agricultural commissioner and former chair of the Democratic National Committee Agricultural Council, said that the family farmer’s problems all boil down to just one issue — price. “The overwhelming consensus among participating farmers (is) that other concerns — overproduction, soil and water conservation, high interest rates, lack of credit, entry by young farmers, the depressed farm service industry, and the high cost of our farm program — could and would be solved when farmers received a fair price for their products.” 1

Getting a fair price
A 2001 study by the Agricultural Policy Analysis Center at the University of Tennessee concludes, “U.S. farm policy has abandoned market stabilization tools in favor of production and trade liberalization with disastrous results. Because crop agriculture does not quickly self-correct like other industries, the elimination of supply management tools in recent U.S. farm legislation has led to record-low farm prices and record-high government payments of nearly $20 billion per year to American crop farmers.

“This cheap-grain policy has benefited multinational agribusiness firms, large livestock operators and importers, but not crop farmers who now sell grain below the cost of production. Under the current U.S. farm policy,” the report continues, “the cost of producing major crops has been much higher than the prices charged for them. More significantly, even with subsidies added to market income, returns for wheat, soybeans and cotton were still well below the cost of production. (See sidebar.)” Without fair pricing, fair markets don’t exist.

“As a result,” the study says, “foreign competitors charge us with dumping excess production on world markets for less than the cost of production. This in turn ratchets up the cost of competitors’ farm programs and damages the agricultural economies of developing countries. The outcome of this ‘race to the bottom’ is certain: All farmers around the world will lose.”

The problem of overproduction
Oxfam America, a humanitarian non-profit, sponsored research endorsed by several farm and commodity organizations to strategize another path. Their study concluded they could solve the problem of overproduction by reviving a system of price supports akin to the New Deal policies of the 1930s. Quite unlike our present policy of direct government subsidies, this model of price supports is backed by a grain reserve. It works by keeping surplus grain off the market, breaking the vicious cycle where farmers have to produce more every year to break even. (See “How a crop reserve supports farmers.”)

Iowa corn farmer and current president of the National Family Farm Coalition, George Naylor, concludes, “This wasn’t a perfect system by any means, but it did keep cheap grain from flooding the market and by doing so supported the prices farmers received. The program, while not always administered well, actually made money in good years.” The 1996 Freedom to Farm bill, however, passed by a Republican Congress and signed by a Democratic president, managed finally to abolish such supply management tools.

Farmer-friendly policies
The Agricultural Policy Analysis Center study shows that price supports in this model would take 14 million acres in major commodity crops out of production the first year, while boosting prices by 23 to 30 percent. “Farm income would rise,” says author, Dr. Daryll Ray, causing a decline in government payments of more than $10 billion per year.”

A computer model shows such policies would limit future consolidation, invigorate investment in agriculture and eliminate global concerns about commodity dumping. They would enable current farmers to stay on the land and encourage new opportunities in rural communities for a new generation of farmers. Farmers would help protect the environment with short- and long-term acreage set-asides and reserves.

How a crop reserve supports farmers

Some tried and true policies that support and stabilize farm prices are worth revisiting, according to Oxfam research. 1

In the New Deal of the 1930’s, and the immediate years after, the federal government set and supported a target price for storable commodities like corn.2 When the market price dropped below the target, a farmer was given an option: Rather than sell his harvest at the low price, he could take out what was called a ‘non-recourse loan’ using his corn as collateral for the full value of his crop. The farmer then stored his corn until the market improved, at which point he sold it and used the proceeds to repay the loan.

If the market failed to improve that year, the farmer could discharge his debt simply by handing his corn over to the government, which would add it to something quaintly called the ‘ever-normal granary.’ It was a grain reserve managed by the USDA, which would sell from it whenever prices spiked (say, during a bad harvest), thereby smoothing out the ups and downs of the market and keeping the cost of food more or less steady or ‘ever normal.’

Anti-trust, traceability and fair labor
Farmers also need enforcement of the nation’s anti-trust laws. The laws originally were designed at the end of the 19th century to thwart agricultural economic concentration in agriculture, but over the past century they’ve been corrupted by the courts. Today, enforcement is restricted narrowly by a politicized Department of Justice to price fixing. The “urge to merge” continues unabated.

Unchecked consolidation in the system leads to problems in the “traceability” of our food; that means knowing where the seed or stock came from, how it was grown and what happened to it after leaving the farm. Vicki Williams, a USA Today columnist, wrote, “The only time I felt truly comfortable about the food I put on my table was when I lived on the farm and grew most of my own.

“Now, I live in an apartment in the city and am dependent on nameless, faceless strangers to grow, process and ship my food. It seems as if unethical and unsafe practices grow in direct proportion to how far we have lost the trail of accountability. So I don’t always trust them to put my family’s best interest over concern for their bottom line. I don’t like feeling helpless, as if every trip to the grocery is a crapshoot. But I really don’t know who to blame.”

It’s good to be concerned about the safety and quality of the food we eat, as well as the economic and social well being of the family farmers who grow and produce our food. Yet attention also must be paid to the men, women and children — domestic and immigrants workers alike — who labor in fields and orchards across the country.

As famed journalist Edward R. Murrow reported long ago from a farm field in his famous documentary, “Harvest of Shame,” “It has to do with the men, women and children who harvest the crops in this country of ours, the best-fed nation on earth. These are the forgotten people, the under-protected, the under-educated, the under-clothed, the under-fed. If it were not for the labor of (these) people … you might not starve, but your table would not be laden with the luxuries that we have all come to regard as essentials.”

Economic democracy
So, as Earth Day and the advent of spring march us through this political year, the plight of family farmers and workers and the current policies that keep them in near servitude will assume their place in the political dialogue. Whether the right issues get addressed remains to be seen.

Even so, as we sit down to the cornucopia of beautiful food from these people in the months ahead, it might serve us spiritually and materially to exercise some traceability and concern for the labor that bestowed these gifts of the Earth upon us. Fair prices and fair markets are key to family farmers’ survival. Government policies restoring fair prices and fair markets to rural America would revive the principle of economic democracy without which, as Thomas Jefferson reminds us, we cannot have political democracy.

2 The target price was based on the actual cost of production, not to be confused iwth the so-called ‘target price’ used in the past to determine subsidies.

What's going on your garden?