In the Bag: What’s the best way to pack groceries?

Some guidelines are clear for the best way to bag groceries. (General rule #1: Don’t let eggs get smashed on the bottom!) Others are more nuanced. Add in the different puzzle pieces making up every shopping list and the time pressure of a long line, and it’s a real skill to pack balanced bags in a fast and friendly and food-safe way.

As a lead-in to the Best Bagger competition sponsored by the Washington Food Industry Association Educational Foundation—and as a way to have fun and honor our expert staff—each PCC location held a store-wide bagging competition earlier this year. The store winners then gathered for a co-op championship. The 22-item challenge for each contender included an avocado, a pint of hot deli soup and a replica pint of ice cream, three plums and four bananas, a bottle of wine and a glass jar of salsa, a replica whole raw chicken, hot dog buns, a 5-ounce bag of potato chips, a box of cereal, a pound of bulk split peas, a bunch of kale, a bar of soap and a round of soft Brie.

The 16 competitors met at the spacious Bellevue store early one late-summer morning, the uneasy silence of the room indicating the tense anticipation of the event—or possibly that their coffee hadn’t kicked in yet. Despite the trepidation of that start, the mood was almost raucous after the first round.

The contest was organized into three rounds (plus a special surprise addition to let store directors show their stuff). To assure equal footing, all the contestants had that same 22-item assortment laid out in exactly the same way. Even the selection of bags—one paper, one reusable—was identical. Judges were Nick Novak, Bellevue’s assistant store director, Darryl Pittman, PCC’s senior director of operations, Leah Quigley, receiving and inventory program manager, and Tim Tackett, director of store operations. 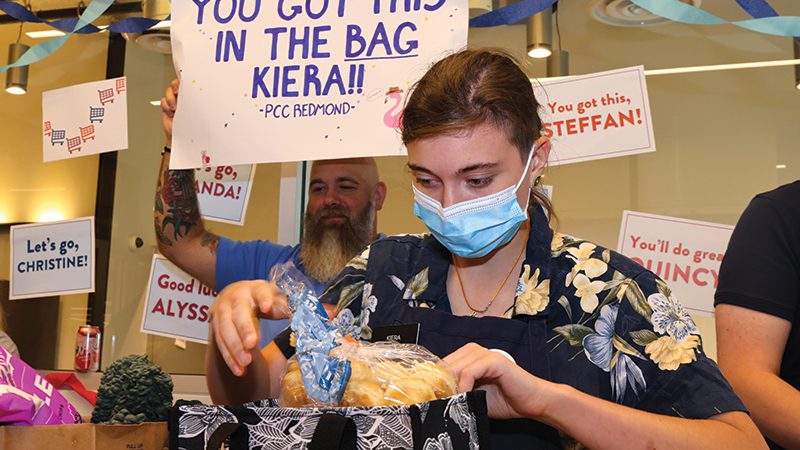 Kiera Parnell from the Redmond PCC

Contestants’ scores were based on four criteria: proper building technique, distribution of weight between bags, customer experience and efficiency.

PCC staff training goes beyond some of the don’t-smash-the-eggs basics, especially when it comes to food safety (and quality) issues. Some tips that may be useful if you bag your own:

While all of those more technical aspects of bagging are to be expected, the friendliness, engagement with the customer, appearance and self-confidence are also important ingredients that go toward making a great bagger. While it’s an entry-level job for some (though not all), it has outsized importance: The final interaction a shopper is likely to have with a store staff member is with the person bagging their groceries.

How well each competitor mastered each of these skills, all as efficiently as possible, determined who moved on to the next round. 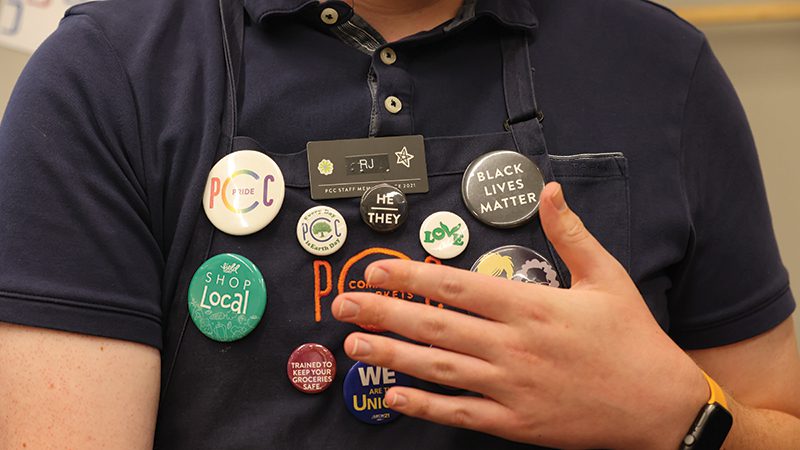 Best of the best

After a great day of competing, learning new things, and getting to know each other, our competitors greeted their new champion, Amanda Benson from the Green Lake Village PCC.

As Novak described it, “Amanda was cool, calm and collected during her championship run.”

The prize was bragging rights and a reusable canvas tote packed with goodies and gift cards. (The winner would have represented PCC at the statewide bagging competition, but it was canceled this year.) Second place went to Jordan Carrasco of Green Lake Aurora, third to Riley (R.J.) Pierce from the Burien store, and fourth to Quincy Van Steenberge of the Issaquah store.

Ever the humble and gracious winner, Benson had a few tips to share with her fellow competitors and anyone wanting to up their bagging game.

“For me, it’s all about building walls,” she said. “I try to get the sturdy items on the exterior of the bags, so I build some structural support. Then other, sturdier items to fill out the middle, and crushable items on top. That’s my strategy.”

Benson’s ability to bag quickly and efficiently was key to her success, but so was keeping her cool and having fun. Say hello and congratulations if you see her or our other champions at the store.

We think all PCC’s staff members are stars in their own right, but those below are the official champions of their store bagging competitions, judged on criteria that include efficiency, customer experience, and the ability to best protect the groceries and distribute their weight between bags.  In some cases a runner-up attended the co-op competition; those names are in parenthesis.

We’re sharing three delicious PCC recipes that make thoughtful, pretty presents for everyone from family members to holiday hosts to colleagues at work.

Sugar and the immune system

Each person processes sugar differently. Our Bastyr University correspondent discusses how the typical seasonal uptick in eating sweets can affect your body.