The local farmer who turned trash into a farm-saving treasure

How a vintage tractor and a YouTube channel revolutionized market farms 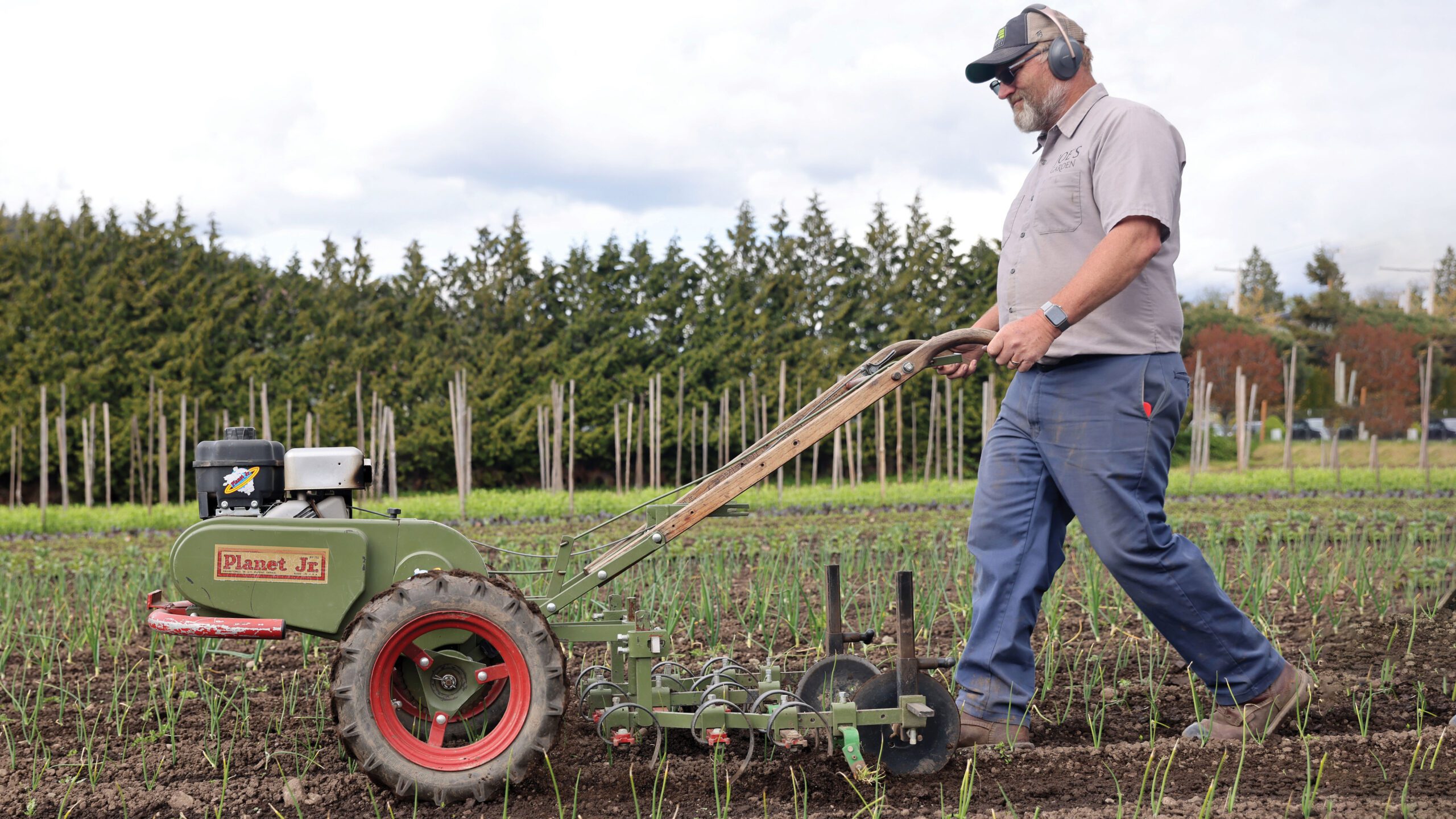 If you buy locally grown vegetables and nursery plants in the Bellingham area, you might recognize Jason Weston as owner of Joe’s Gardens, a 7-acre, pesticide-free farm. To a passionate niche of the nation’s farmers, though, Weston is a legend.

He’s “The Planet Jr. Guy,” the person who recognized the value in a vintage walk-behind tractor that farmers cultivated their fields with in generations past.  Through experience, experimentation—and ultimately the Internet—Weston connected the dots between piles of rusty old equipment parts on the East Coast and the needs of today’s market farmers.

A self-effacing, soft-spoken fellow, Weston tells his story one day while transplanting lettuce seedlings. He never set out to become farmer-famous. Weston was just farming. And like all farmers big or small, the 50-year-old was constantly innovating more efficient ways to work, especially dealing with weeds.

“The technology and the information, it was all out there. It was just kind of forgotten,” Weston says, showing me his original Planet Jr. tractor, the one he salvaged from the farm junk pile. It’s a model Bp-1, manufactured around 1955.

“This tractor revolutionized farming for us.”

The Planet Jr.’s themselves are unimpressive if you don’t know better, compared to today’s age of big tractor tires, big tractor motors and even bigger tractor implements, run with precision GPS and—coming soon!—self-driving capabilities. John Deere’s fully autonomous new tractor, all eight tires and 14 tons of it, has an estimated price tag of a cool $500,000.

Planet Jr.’s, on the other hand, are two-wheeled and human-sized. You walk behind them instead of riding on them. A single worker can pick them up and put them in the back of a beat-up old farm truck. A newly refurbished one, plus a tool setup, runs $1,500 to $2,000.

That’s their beauty. Planet Jr.’s were made to fit the scale, size, crop diversity and economics of America’s once prolific small farm industry. Farmers a lot like Weston.

Planet Jr. tractors were built by S.L. Allen & Co., a Philadelphia farming equipment manufacturer founded in 1869. Their target customer was the “one-horse farmer” of the early 19th century. Back then, the U.S. had between 6 and 7 million farms and 40% of the total U.S. population lived on farms, according to farm and agricultural economist Jayson Lusk. The average farm was about 150 acres.

S.L. Allen & Co. started in the wheel hoe business—human-powered, weed-killing tools. Planet Jr., first introduced in 1930, was a natural extension. The manufacturer simply built a frame for a small gasoline engine, added a second wheel so the tractor could straddle a row of plants and rigged up a detachable toolbar for cultivating tools.

Planet Jr. wasn’t the only walk-behind cultivating tractor, but it was the most popular, especially in the Atlantic coastal states and the Great Lakes area, where market farming persisted for decades. As the years went by, S.L. Allen & Co. added models and features. Wider wheelbases for wider plantings. Different cultivating hoes and implements to mount on the simple toolbar. They even added fertilizer hoppers and seeders.

Then came the industrial revolution. Americans moved off the farm and to the cities. Factories became the name of the game and farms went factory, too. Farmers no longer grew a diversity of market crops delivered fresh to small, regional wholesale markets and grocery stores.

S.L. Allen & Co. and their Planet Jr.’s followed the small farmer out of business. They closed in 1968, just a few years before Earl Butz, President Richard Nixon’s agriculture secretary, infamously told U.S. farmers to “get big or get out.” As market farms disappeared, walk-behind cultivating tractors were forgotten. 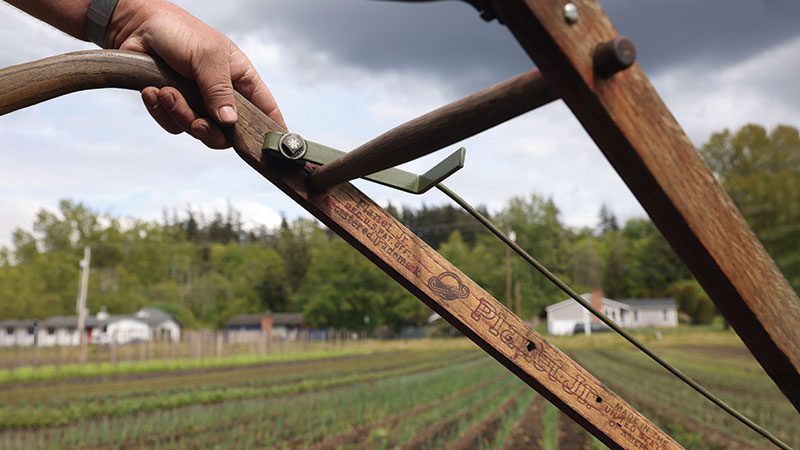 Since Weston could remember, an old Planet Jr. had collected dust in his farm equipment shed.

The business’ founder, Joe Bertero, purchased the tractor back in the 1950s. Weston’s dad, who worked for Joe before he bought the farm, even used it for a time. Weston tried it out as a kid, but the 1950s-era engine was an “absolute nightmare to get going.” So, when Weston took over from his father in 2007, he left the Planet Jr. in the shed. Not impressed.

He readily admits now that he hadn’t understood the nuances of weed management. He was tilling his soil, not cultivating.

Cultivation isn’t a task to dominate, it’s an art. Depth of cultivating tools, timing, tricks like burying weed seedlings under a small furrow of soil or just barely undercutting them at the root level—without stirring up the soil enough to expose weed seeds and encourage germination—all these techniques can mean the difference between a harvestable crop and a weed-choked mess.

Put two experienced market farmers together and once they finish talking about the weather, they’ll talk weed management.

By 2013 weeds were extra-heavy on Weston’s mind. Hand-weeding took hours of labor time he and his crew didn’t have. And he was jealous of larger neighboring farms with perfect, weed-free beds managed by equipment too big for his farm.

He got the idea to hook the Planet Jr. toolbar, sans the cantankerous engine, to the back of a Scott’s riding lawnmower, and ran it through some rows. He immediately recognized the possibilities.

“I hauled it up to Bellingham Motors, Norm put a new motor on it, I took it back down here and I was just blown away by what it could do, how fast,” Weston recalls. The narrow wheels and tractor height, plus light weight, were perfect for moving through his beds, straddling crops but pulling blades behind it to decimate weeds. He found a local welder to build him a new toolbar and ordered new, better shovels to use with it.

Weston was a convert, but he wanted more. There had to be more Planet Jr.’s laying around? More implements to fit the toolbars? And most crucially, more clamps. When you use cultivating equipment, the clamps that attach the cultivating tools to toolbars are gold—especially when nobody is making the ones you need.

But Weston was stymied. Planet Jr.’s hadn’t been as popular on the West Coast as in the East. So, he joined Facebook to find answers. Or rather, his wife made him.

“I wanted nothing to do with Facebook. I didn’t get it and understand what the point of it was. Then she found this group, ‘Planet Jr. and Similar Wheel Hoes.’ I did a post, my first post ever,” Weston recalls. He met a bunch of walk-behind tractor collectors, guys scrounging them out of auctions and yard sales just for sheer interest. Then Jason put up a photo of his refurbished tractor at work in his fields.

It was a light bulb moment.

“We can actually be using these things.”

Mark Lovejoy, co-owner of Garden Treasures, a market farmer in Arlington, was one of those converts. Stopping by Joe’s Garden one day, he was amazed at the “clean fields at the scale they were growing.” He, too, became a Planet Jr. fan.

Meanwhile, Weston and some other farming fans wondered if they could use more recent cultivating equipment, like finger weeders, with their Planet Jr’s. Finger weeders have flexible plastic fingers that move between plants, gently removing in-row weeds. He ordered a set and they worked like a dream.

“Once you got the in-row weeding along with all the other tools, then all of a sudden, you had a system that could do things that I never thought possible,” Weston says. Cultivating tasks that had taken him a crew of 20 and days to accomplish he could now do himself, in hours.

In 2019 Tilmor, an Ohio company, released a new version of the old Planet Jr. It was the first time a two-wheel, walk-behind cultivator tractor was commercially manufactured in decades. They had Weston beta-test their model. He’s even featured in their marketing videos.

And even newly tooled, the concepts remain old school.

“If you took someone from the 1800s and brought them today…apart from people not using horses anymore, the tooling itself would be very, very familiar to farmers from 150 years ago,” Weston says.

So that’s the story of how a Bellingham farmer became famous in some circles. But set aside Weston’s role in Planet Jr’s. revival, his farm nerd joy over his 20 toolbar sets, his love for chasing down old parts, manuals, and rooting out the history of a “mystery tractor” (a Planet Jr. prototype). For Weston, Planet Jr.’s are about one thing—building back the market farm community.

“If we want to see small farms coming back, we need to see more of the 20 and 30-acre farms. Then you can have warehouses again and local distributors. But if you don’t have that infrastructure in place that was lost 70 years ago, there’s not a lot you can do as a small farmer but compete with every other small farmer.”

To do that, small farmers need the right tools to become slightly bigger small farms, Weston says. Even if that looks a lot like the tools their great-grandfathers used.

As Weston is testament to, even in our era of big ideas and next-gen technology, sometimes the best ideas aren’t the new ones. They’re the ones we rediscover.

Georgie Smith is a fourth-generation farmer on Whidbey Island. She writes about food and farming.

The Cherokee Purple puzzle: Should we rename famous seeds?

While seed names can be a beautiful connection to identity, culture, worldview and history, seed growers are grappling with old names that are derogatory or incorrect.